160. We set out on our longest hike so far on a warm, overcast morning. It’s also our earliest start: 7:20 am. In one sense we’ve been lucky with the weather, as aside from the occasional thunderstorm there’s been no precipitation for weeks, and the Trail is dry and firm under foot. (Mike and I hiked this section of Trail in the spring, and had to turn back as it was so sodden.) But it’s also been very hot and humid for the whole summer, and hiking after noon is inadvisable. We start by scampering across busy Highway 5 from our parking space at the side of that highway, east of Waterdown. Soon enough we’re going through the middle of a farmer’s field. It seems as though we’re in a rural area miles from anywhere, though this is quite misleading.

161. Beautiful subdued colours in this marshy spot! But the phragmites (reeds) at back and the purple loosestrife in the foreground are the bane of local environmentalists, as both are considered invasive species. 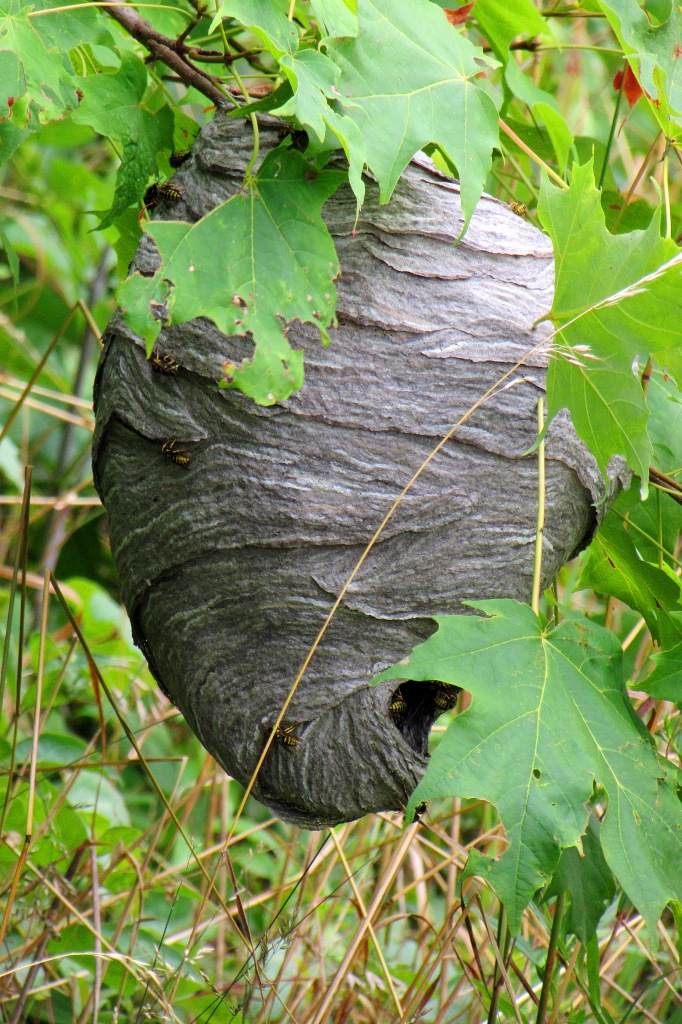 162. A huge wasps’ nest hangs low right by the Trail. If we don’t bother its inhabitants, hopefully they won’t bother us. We step cautiously by.

163. Though “No. 1 Side Road” doesn’t sound like a very exclusive address, this is definitely “Release the Hounds” territory. There are several enormous mansions behind formidable security fences around here. A direct correlation is beginning to clarify itself: the richer the local property owners, the more we hikers find ourselves relegated to the shoulder of public roads. In short, the super-rich don’t want the Bruce Trail anywhere near their property.

164. That impressive crag is Mount Nemo, the summit of which is today’s destination. All those blooms in the foreground are classified as weeds, but together they make a beautiful arrangement.

165. There is no sidewalk or shoulder along No. 1 Side Road, but almost all the motorists who see us coming give us a comfortably wide berth if they can. At least we’re facing oncoming traffic. I wouldn’t like to be one of those cyclists, dependent on the patience of easily distracted motorists in a hurry behind them.

166. A barn near the foot of Nemo makes for a pleasant rustic scene.

167. Less pleasantly rustic is a scene like this … unless you happen to be Larissa, of course. 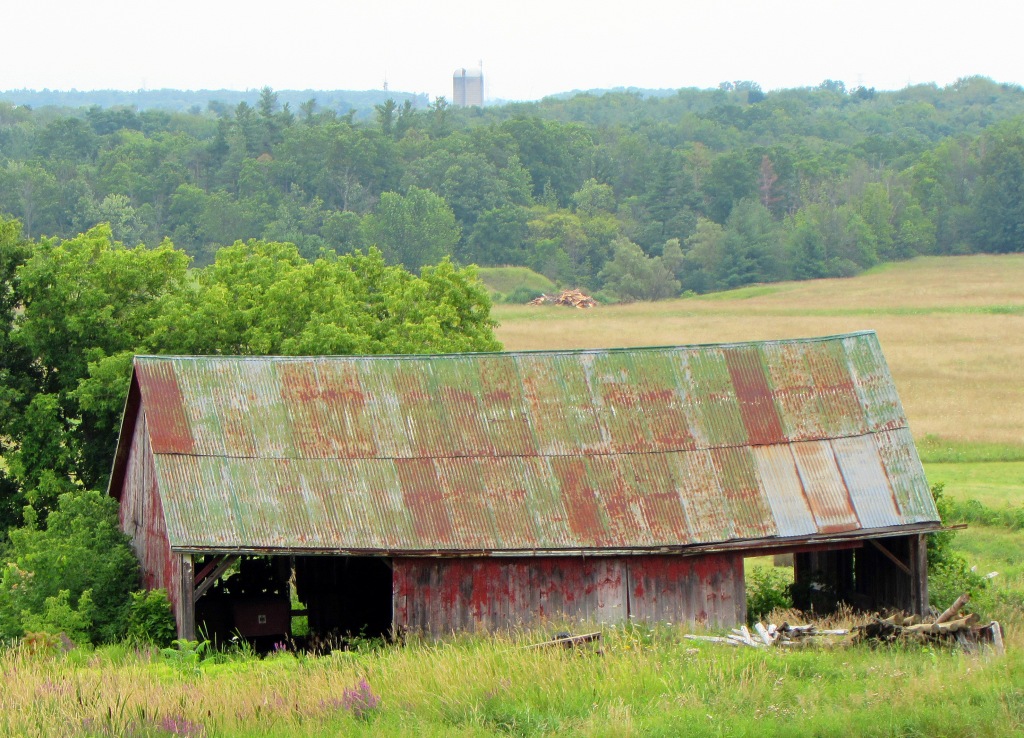 168. Here’s a scene that suggests the decay of rural life as wealthy suburbanites colonize the base of the Escarpment here in the Halton Region.

169. More evidence of rural decay. Salem Cemetery at the corner of Walker’s Line and No. 2 Side Road dates from the 1850s. There was once a Salem New Connexion Methodist Church here, but it was moved to another location in 1890. The older graves are in poor shape. This one, memorializing Caleb G. Flewelling, is in fragments. The earliest legible marker I could find in this cemetery is that of Mathias Simmerman Jr., who died on 2 January 1856, aged 38 years, 7 months, and 20 days. Let’s offer an epitaph that can’t be effaced by time for those lying in Salem Cemetery:

Let not Ambition mock their useful toil,
Their homely joys, and destiny obscure;
Nor Grandeur hear with a disdainful smile
The short and simple annals of the poor.

The boast of heraldry, the pomp of pow’r,
And all that beauty, all that wealth e’er gave,
Awaits alike th’ inevitable hour.
The paths of glory lead but to the grave.

I hope the local owners of attack dogs are listening.

170. The ascent of Nemo is steep and rocky. It culminates in this narrow crevice that has to be negotiated via the rickety wooden ladder. Incidentally, no one seems to know how Mount Nemo got its name. But that’s entirely suitable, as nemo is the Latin word for “no one.”

171. The Escarpment at Nemo is impressively steep. From the edge, with the help of binoculars, you can watch turkey vultures wheeling about below looking for carrion, golfers teeing off at Indian Wells Golf Club, or planes descending into Pearson Airport. 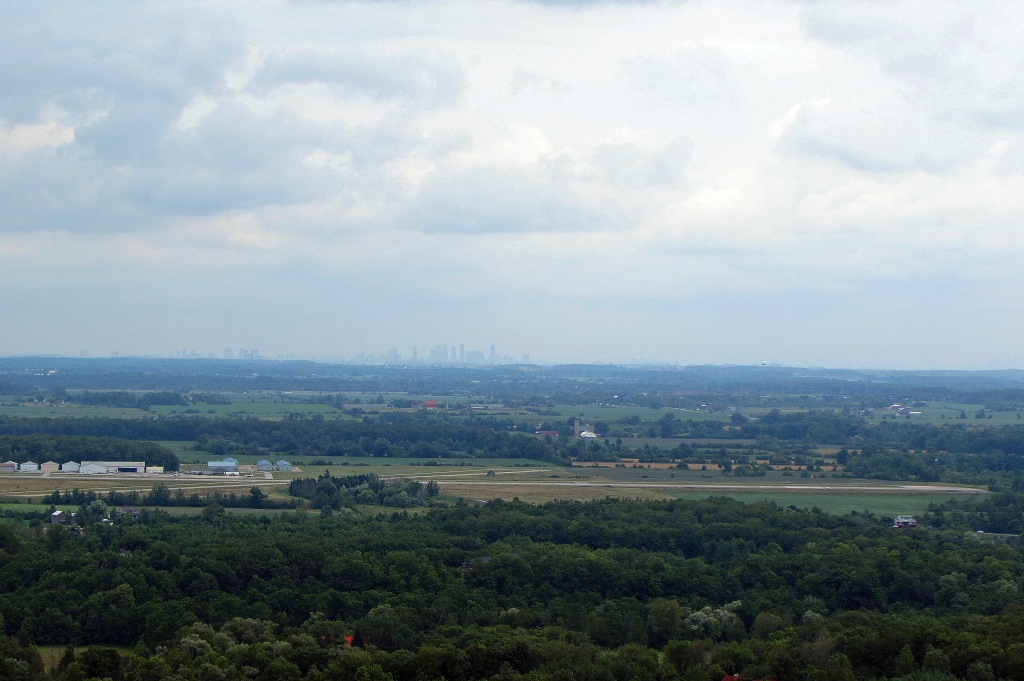 172. A pity it’s so overcast, as the view eastward from Nemo on a clear day is extensive, taking in the shore of Lake Ontario and the downtown Toronto skyline. Today we can clearly see the forested valley of Bronte Creek in the foreground and the runway of Burlington Executive Airport in the middle ground, and if we look hard we can just about make out an impressive city skyline on the horizon. It’s often mistaken for Toronto by those landing at Pearson for the first time, but actually it’s Mississauga. 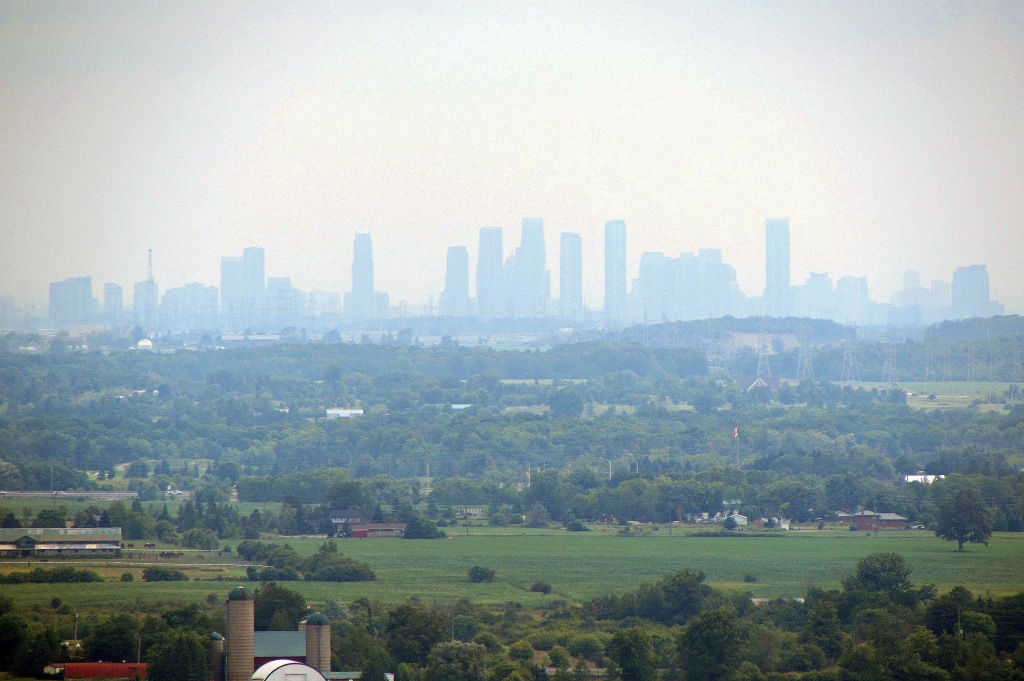 173. If we zoom in a bit, the high-rise condo towers of central Mississauga come into focus. This former suburb with a population of over 720,000 is now the third largest city in Ontario, after Toronto and Ottawa.

174. The view to the northeast is more rural, at least for the moment. The ridge on the horizon is Rattlesnake Point, a popular local recreational destination. If you like things easy you can drive to the summit for the view and a picnic; if you like them harder you can top rope up and down its cliffs. Rattlesnake Point is actually an outlier of the Escarpment, separated from it by a narrow canyon. There are no rattlesnakes up there today, though one species, the massasauga, can be found near the northern end of the Bruce Trail. Looking forward to meeting it! Behind the Point lies the rapidly expanding town of Milton. We’ll be heading in that direction on the next hike.