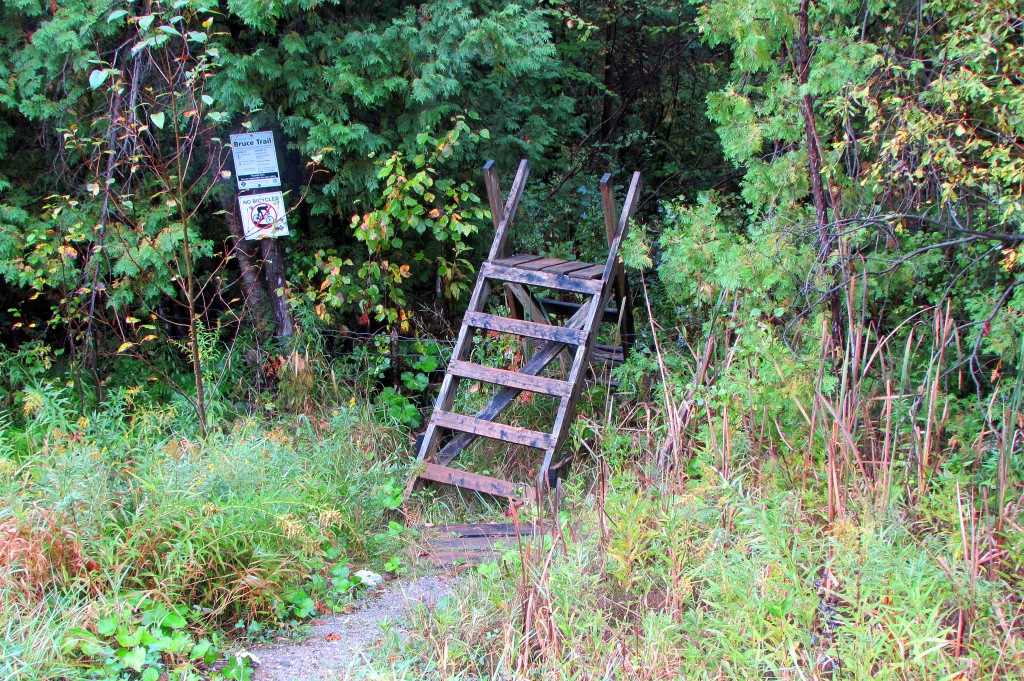 231. A stile marks the beginning of today’s hike. I find stiles rather stimulating: they invite you to make a transition between two worlds, while at the same time setting you a little physical test. And I’m not alone in this feeling: it seems that stiles have long been associated with erotic activity. In bygone days, rustic lovers, “walking out” together on country paths for the first time, would have to pause when they came to a stile. This was the chance for physical contact, as he handed her up one side and then down the other. And once they got to know one another better, a stile was a place for dallying, kissing, and canoodling. In Tennyson’s poem “Marriage Morning,” the groom, looking back on his courtship, recalls fondly and euphemistically, “Woods, where we hid from the wet,/ Stiles where we stayed to be kind.” You can find many more lovers-at-the-stile references in Kim Taplin’s book The English Path (1979). “Stile,” by the way, is not etymologically related to its homophone “style.” The ladder kind of stile comes from a Germanic root associated with climbing; “style” meaning “manner” or “flair” comes from a Latin root signifying a writing instrument. 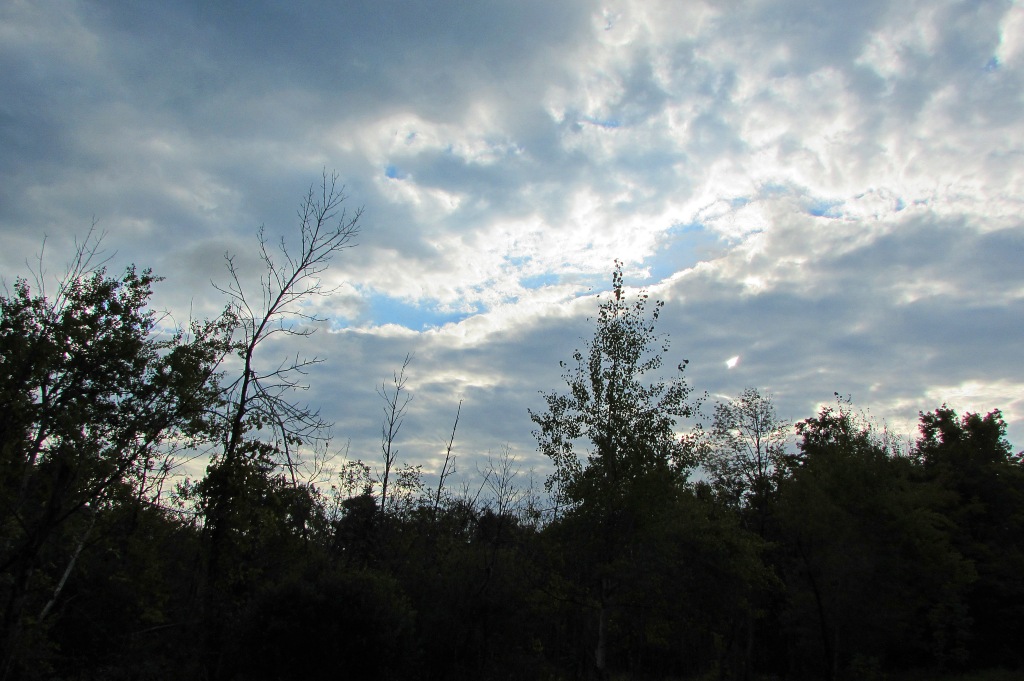 232. It’s been longer than we anticipated since the last hike. For most of September other matters intervened, as they tend to in life. It’s been a long, hot summer, but there’s definitely a touch of fall in the air today. The weather is unsettled as we set off up Sixth Line. 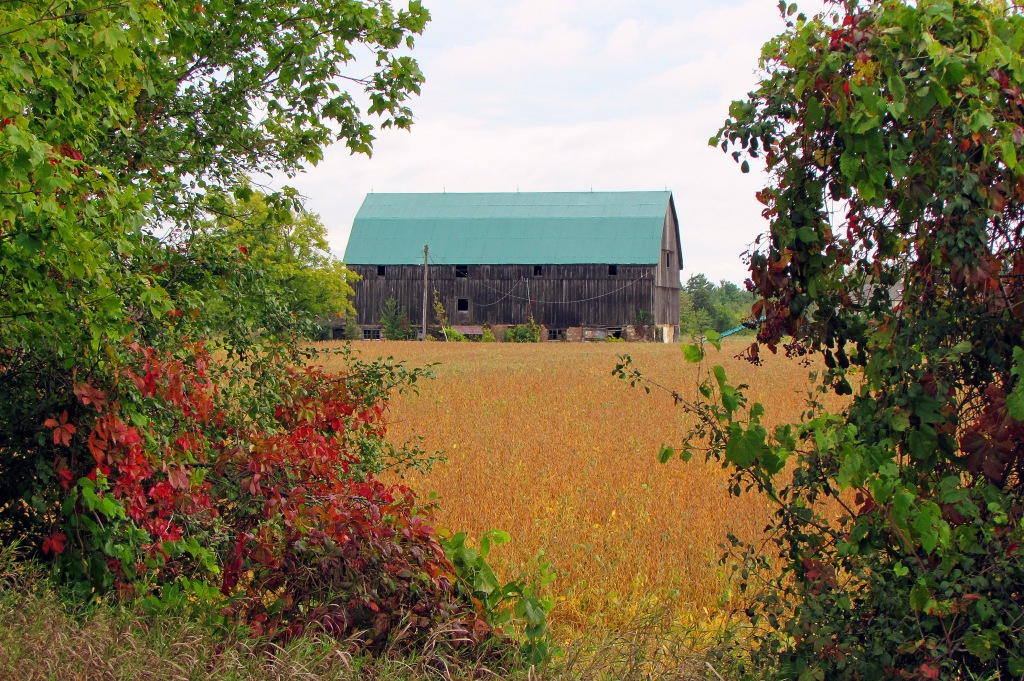 233. But things settle down as the morning wears on. A fine barn and a mature crop framed by autumnal foliage: late September in Scotsdale Farm. 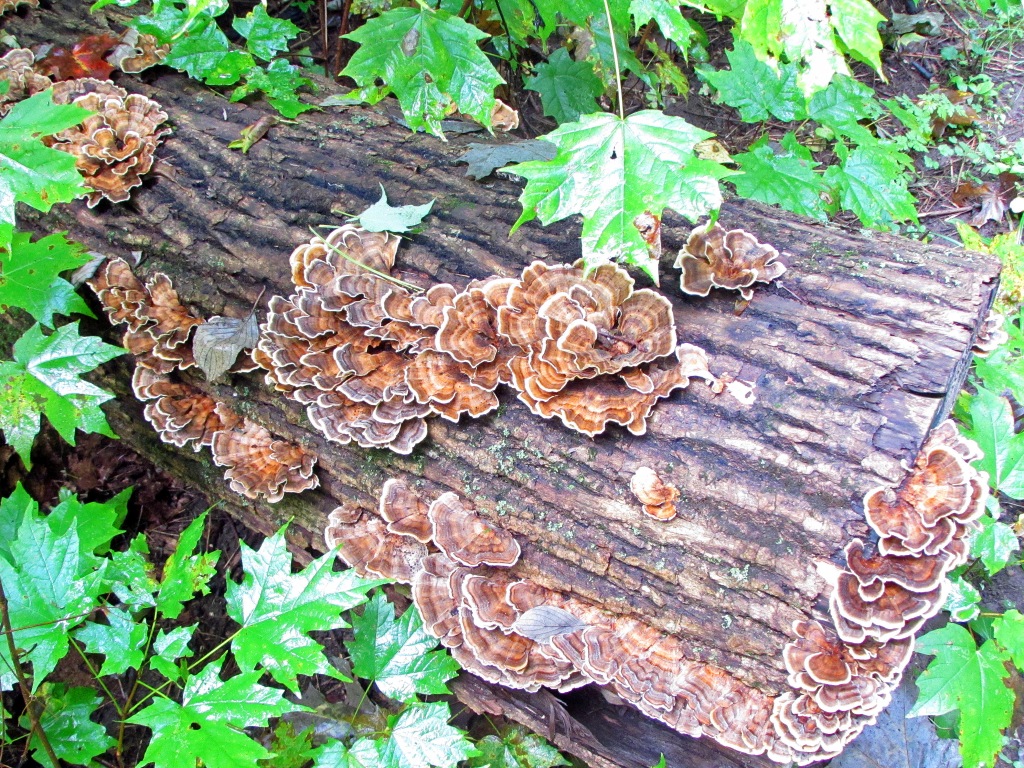 234. Turkey tails (Polyporus versicolor) are saprobic fungi (i.e., ones feeding on dead matter) that spread themselves out on rotting wood like roof shingles. Such fungi are the only complex organisms capable of digesting wood, and thus they play an important role in Nature’s recycling operation. Their name comes from their resemblance to a male wild turkey’s tail when he’s displaying. 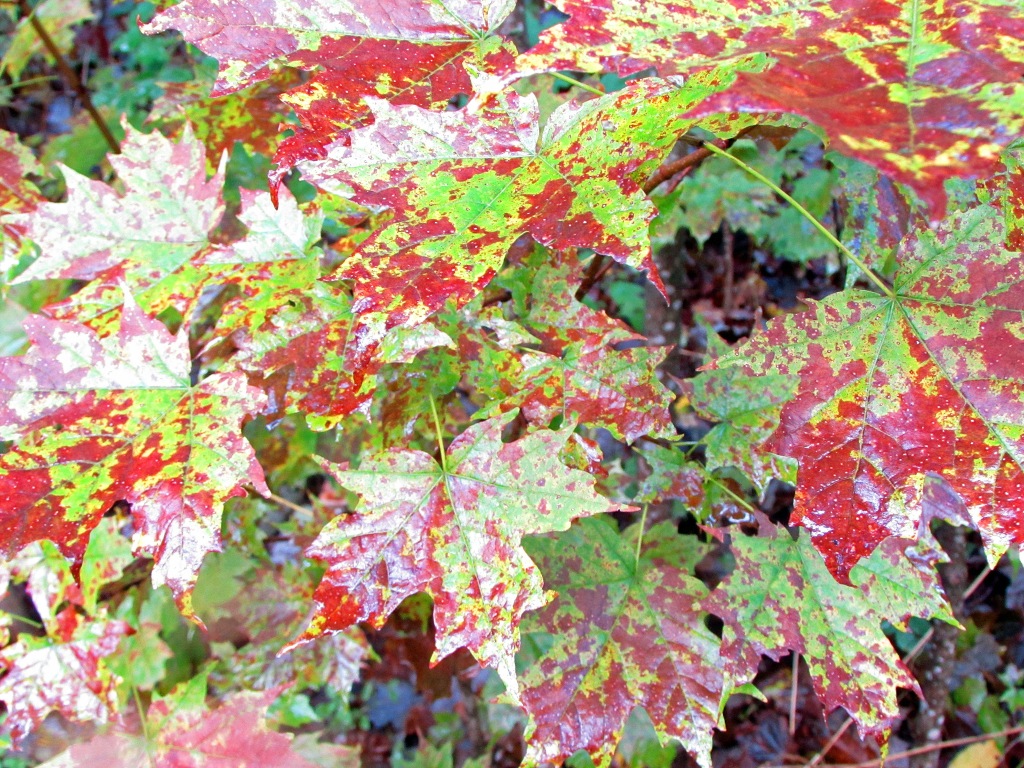 235. Half-turned maple leaves put on a brilliant display of colour, making Jackson Pollock look dowdy. Apparently yellow and orange are already ”in” the leaves as carotene. In summer, these colours are masked by the dominant green of chlorophyll. This substance absorbs sunlight and transforms it into energy the tree needs to turn carbon dioxide and water into nutritional carbohydrates. Once maple leaves start to die, the underlying colours become visible. At the same time, other chemical processes lead to the development of red anthocyanin pigments also found in some oaks and sumacs. 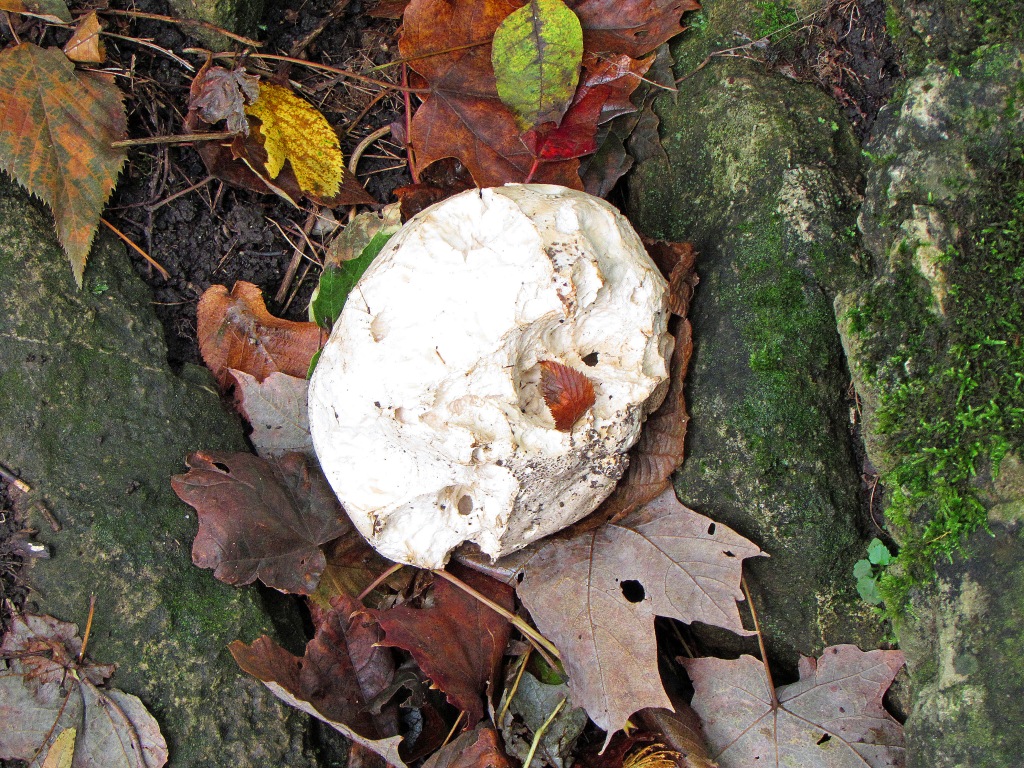 236. This is also the time of year for finding puffballs nestling at the foot of trees. This one is the size of an ostrich egg. They’re supposed to be edible when white all the way through, but I’m not strongly tempted to sample this one. 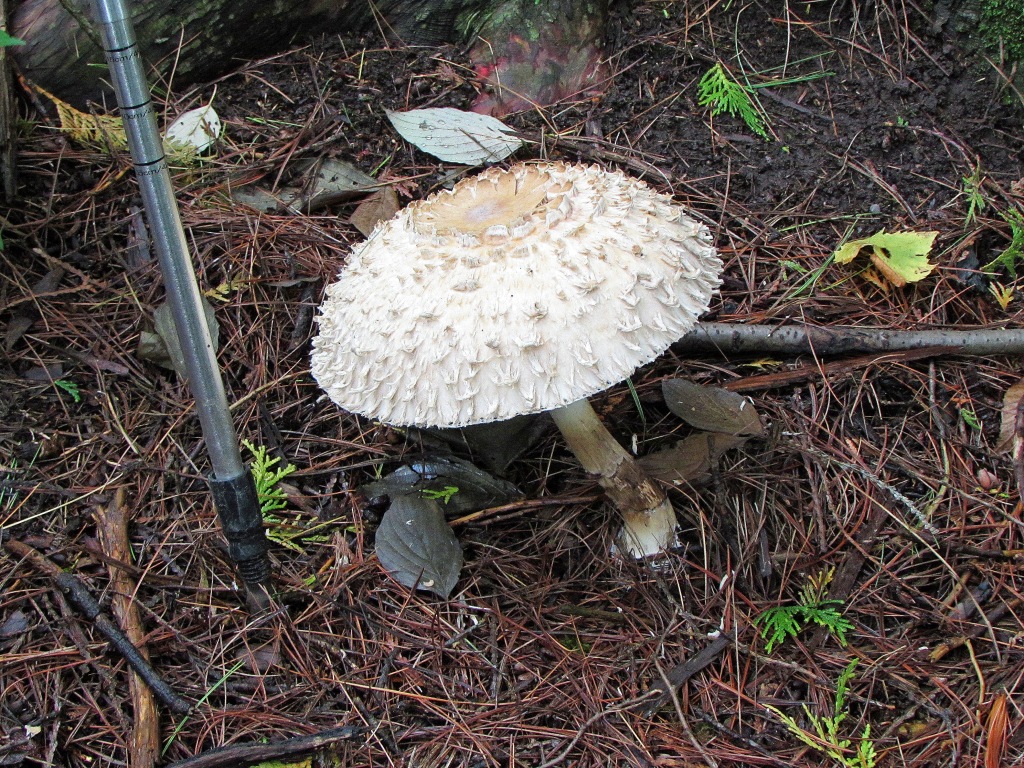 237. This delicate, almost sculpted mushroom is surely one of the amanita varieties, but I have no idea which one, and some them are deadly poisonous. It’s time to develop an app that will instantly and correctly identify wild mushrooms. On second thoughts, the experts can’t agree about whether certain species are edible or not, so patience and extreme caution remain advisable.

238. A small inukshuk stands by a creek. This kind of stone monument in the shape of a person originated in Arctic North America: inuk-shuk means something like “person-substitute” to the Inuit. A red inukshuk appears on the flag of Nunavut, Canada’s northernmost territory. In traditional society inukshuks functioned as directional signs or reminders to wayfarers or hunters. But these days you’ll find them all over Canada: they have become an alternative national symbol. To me they suggest a humble human presence at one with the land, in that they are anonymously constructed of natural stones found on the spot, and they can be easily dismantled, leaving no trace. 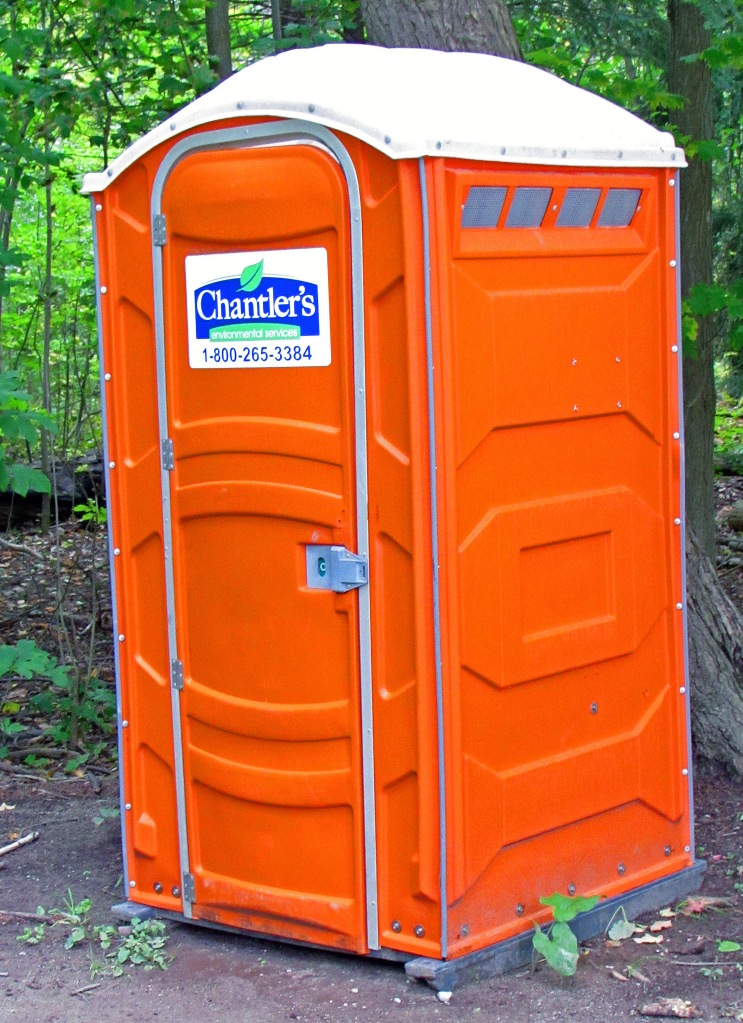 239. In stark contrast to the modest inukshuk, this garish object at the gateway to Silver Creek Conservation Area signifies a very different attitude to the wilderness. Let’s place something entirely artificial, unnaturally coloured, and functionally spurious in a prominent place to show that we can impose the conveniences of civilization upon wild Nature! And let’s label it “Environmental Services”! 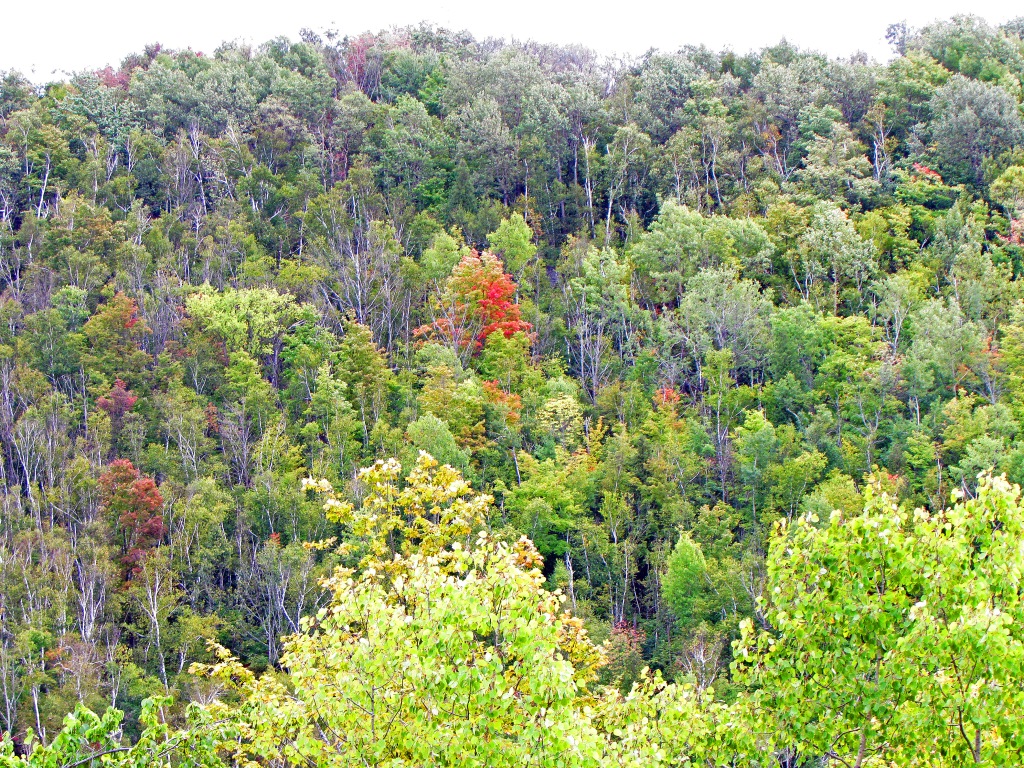 240. The Silver Creek Valley forms a deep canyon, and the Trail runs for a time along its western edge. This is a view of the thickly wooded eastern edge, showing touches of Fall. 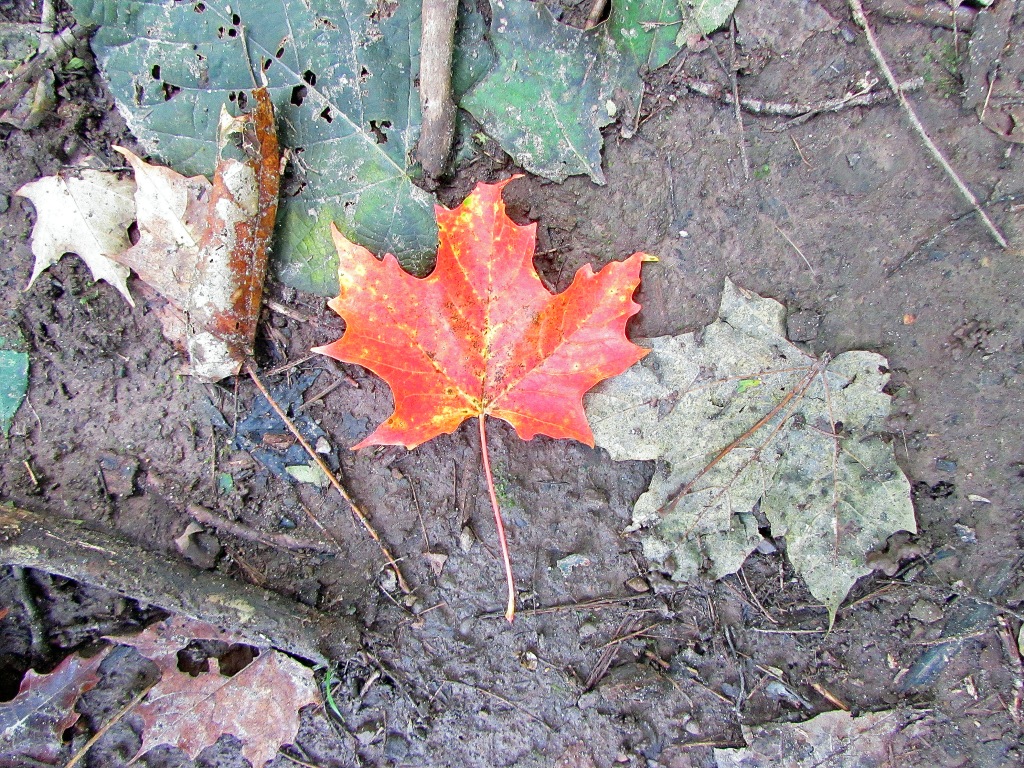 241. What could be more Canadian! The maple leaf was first adapted as a symbol by French Canadians in the early 19th century. A stylized red one with eleven points appeared on the national flag in 1965, since when it has been the globally recognized symbol of Canada. Ten species of maples grow in this country: the sugar, black, silver, bigleaf, red, mountain, striped, Douglas, vine, and Manitoba. One or more of these species grows in every province. The (generic) maple was designated Canada’s national tree in 1996. 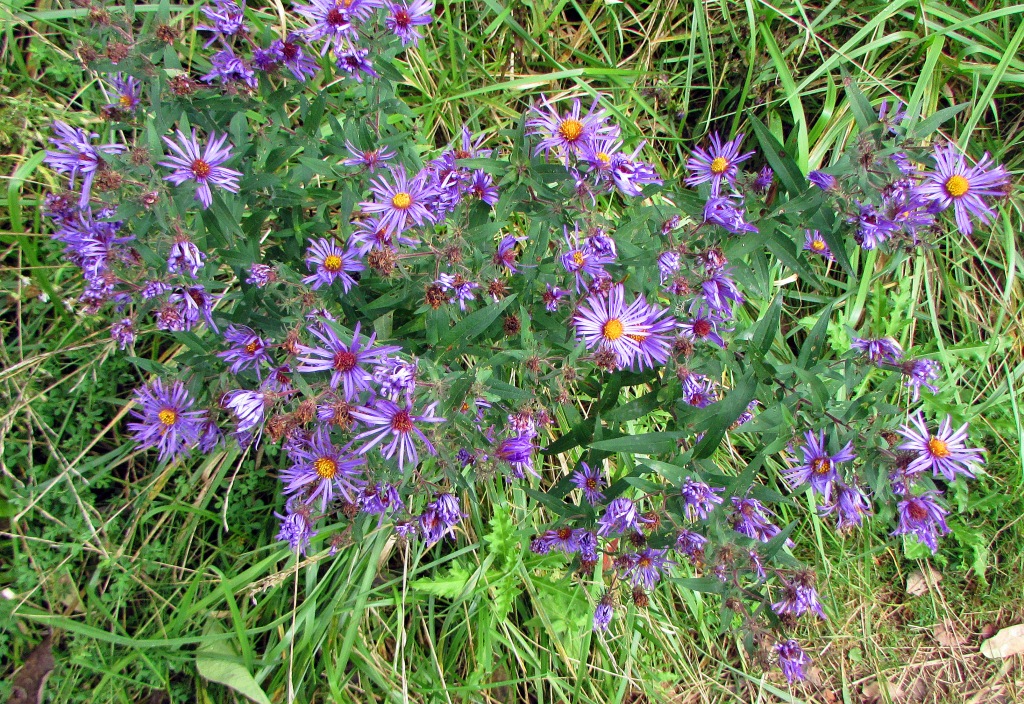 242. Early fall is the time when purple asters decorate the Trail. Actually “purple aster” doesn’t exist as an official wildflower name for one of the many members of the aster family found in Ontario. The ones above are (probably) Symphyotrichum novae-angliae, i.e., New England asters. In spite of the name, you can find them, or something like them, east of the Rockies from the Gulf Coast to Ungava Bay and everywhere in between. Aster means “star” in Greek, and these flowers are indeed the stars of the late September Trailside.