546. We start at Webwood Falls on a grey, overcast day that gradually brightens. No rain, for which I’m thankful, as I have a new camera to put through its paces. We are soon negotiating this “regenerating” meadow from which invasive European buckthorn has been removed. Two Bruce blazes on short poles are visible, giving us a clear sense of the Trail’s direction. It’s relatively easy to waymark a trail through forest, but where there are no trees, trail blazers must improvise, and here they have done so diligently.

547. I’m learning the foibles of my new camera. It’s a Canon PowerShot SX540 HS, a slightly larger and heavier update of my old instrument. It has a resolution of 20.3 megapixels and a 50x optical zoom compared to my old camera’s 12.1 and 30x. But in spite of all this extra digital potential, old-fashioned black and white sometimes gives the best result. 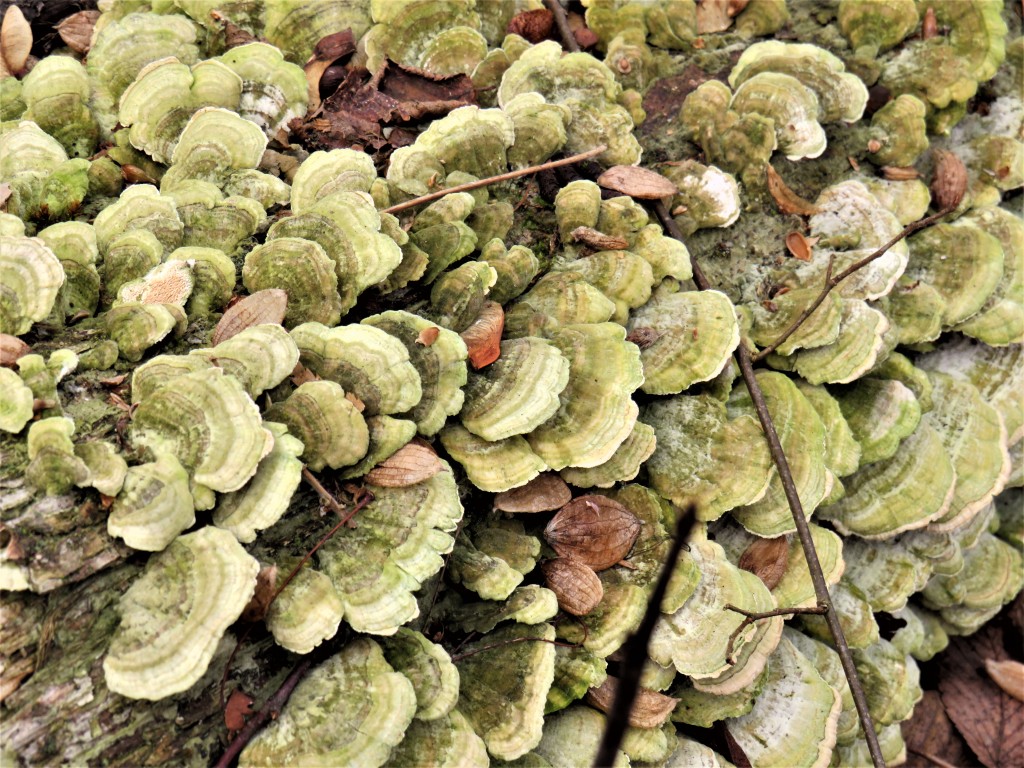 548. Now let’s try a close-up. Apparently these turkey tails (Trametes versicolor, a.k.a. Coriolus or Polyporus versicolor, see 19.234) are green because they have grown old and been suffused with blue-green algae. The Chinese call these common bracket fungi Yun Zhi and the Japanese call them Kawaratake. They are popularly supposed to be packed with the kind of medicinal goodness that can cure everything up to and including cancer. But online mushroom expert and wit Michael Kuo denies this: “The only health benefits associated with consuming Trametes versicolor result from the exercise involved with hunting for it in the woods.” 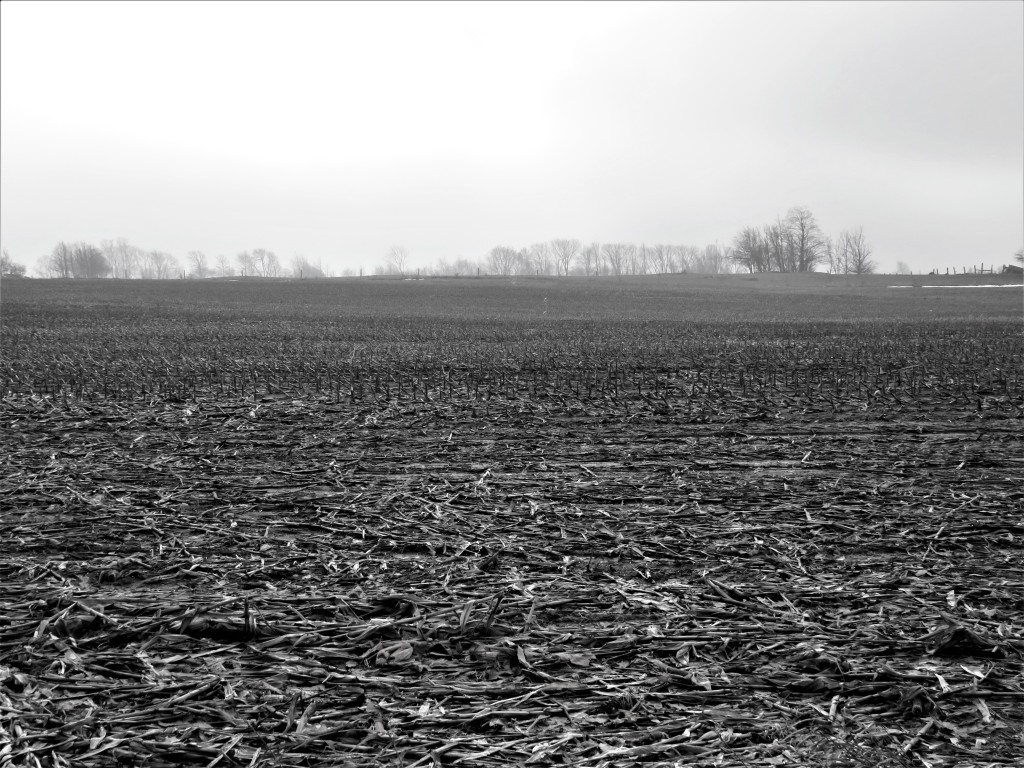 549. This might be a scene from one of the World War I Battles of Ypres, but actually its a field of corn that has recently been harvested …

550 … and because it provides a dash of yellow among the prevailing neutral tones, here’s a cob at the edge of the field that the harvester has missed.

551. The upgraded zoom lens captures Grey County Road 7 as it heads north towards Meaford on Georgian Bay. The brown sign to the right of the road reads “Griersville,” and the road joining GR 7 on the right just beyond it is the western end of the last surviving paved section of the Old Mail Road. 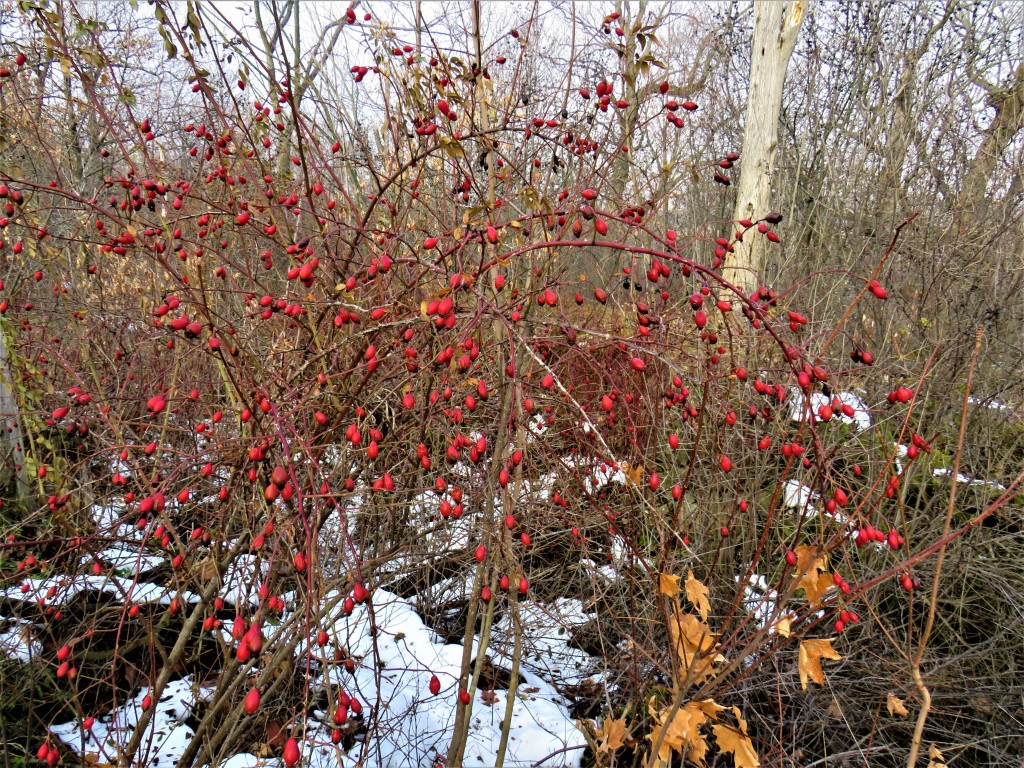 552. Rose hips add a touch of vibrant colour to the Trailside. Back in the day in England, babies and small children were given daily spoonfuls of rose hip syrup to ward off colds. Rose hips are high in vitamin C and during World War II foods containing this essential nutrient were hard to come by. Older children were paid threepence (a pittance) per pound to gather wild rose hips. A recipe for homemade syrup from the 1950s asked for 2 lbs of rose hips, 1.5 pints of water … and 1.5 lbs of sugar! Of course the oversweet syrup rapidly eroded the enamel of postwar British teeth. 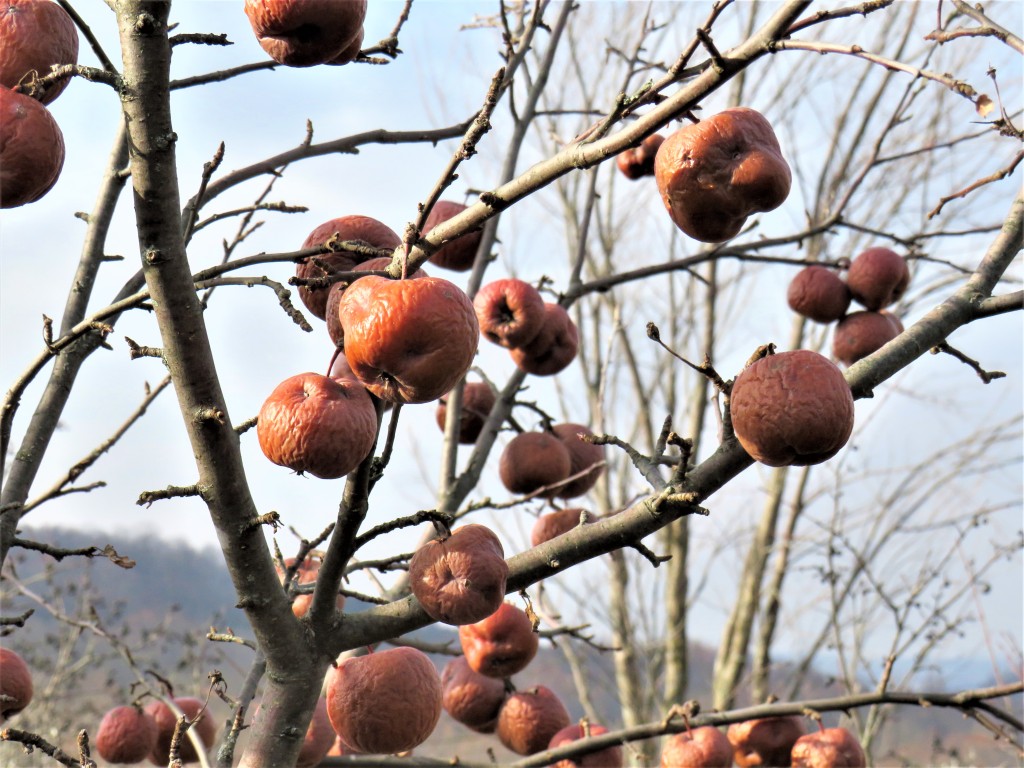 553. There are still apples on the tree around here, though after a few frosts they are rather the worse for wear.

554. The camera’s zoom captures late harvesting on the summit of a distant hillock, too far away for the sound to carry. 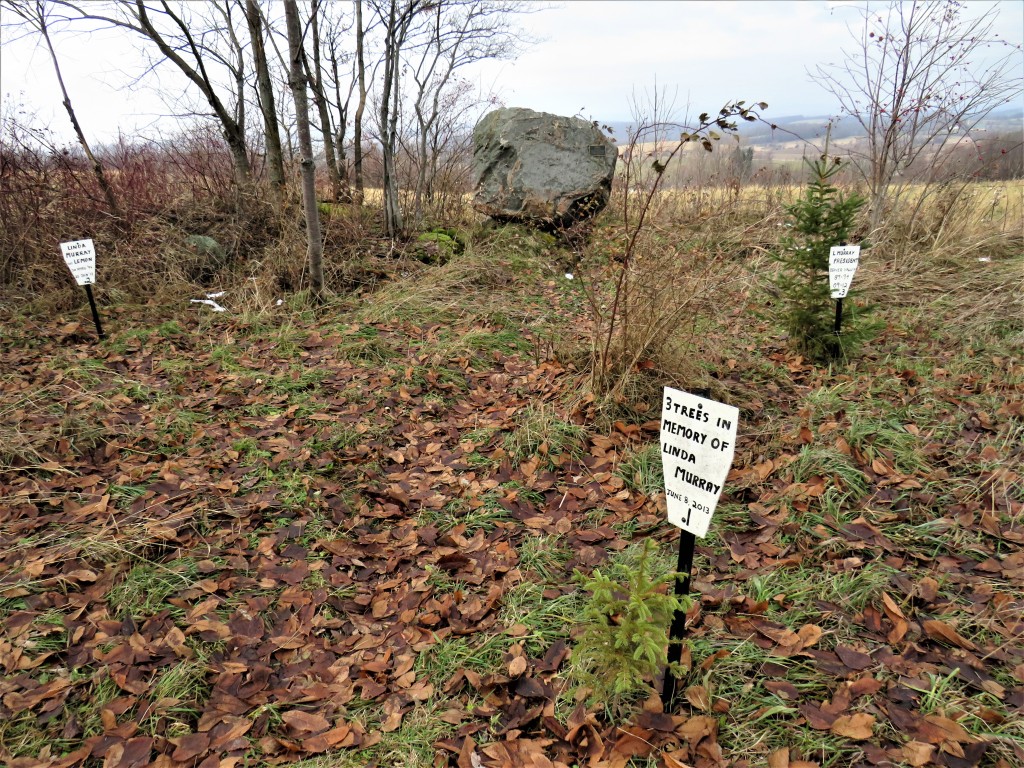 555. Linda Murray (1946-2013) was a President of the Beaver Valley Bruce Trail Club. There’s a formal plaque commemorating her on that boulder.

556. The Trail passes by a place where water gushes out of the rock itself. The scene puts me in mind of the first lines of a fine poem, W.H. Auden’s “In Praise of Limestone” (1948):
“If it form the one landscape that we, the inconstant ones,
Are consistently homesick for, this is chiefly
Because it dissolves in water. Mark these rounded slopes
With their surface fragrance of thyme and, beneath,
A secret system of caves and conduits; hear the springs
That spurt out everywhere with a chuckle,
Each filling a private pool for its fish and carving
Its own little ravine whose cliffs entertain
The butterfly and the lizard….”

557. Here’s another good reason why winter hiking on the Bruce should not be done alone and without icers or cleats. In limestone territory at this time of year the icy Trail skirts black holes like this one. One slip and you’re in Tartarus with no cell phone reception or illuminated exit sign.

558A & B. A touching memorial. Anthea’s Waterfall is a little falls near the end of today’s hike. It’s named for the daughter of Dr. Tom East (1922-2012), one of the founders of the Bruce Trail: he laid out much of the Caledon Hills Club Section in the 1960s. Anthea was killed in a cycling accident in France in 1971. 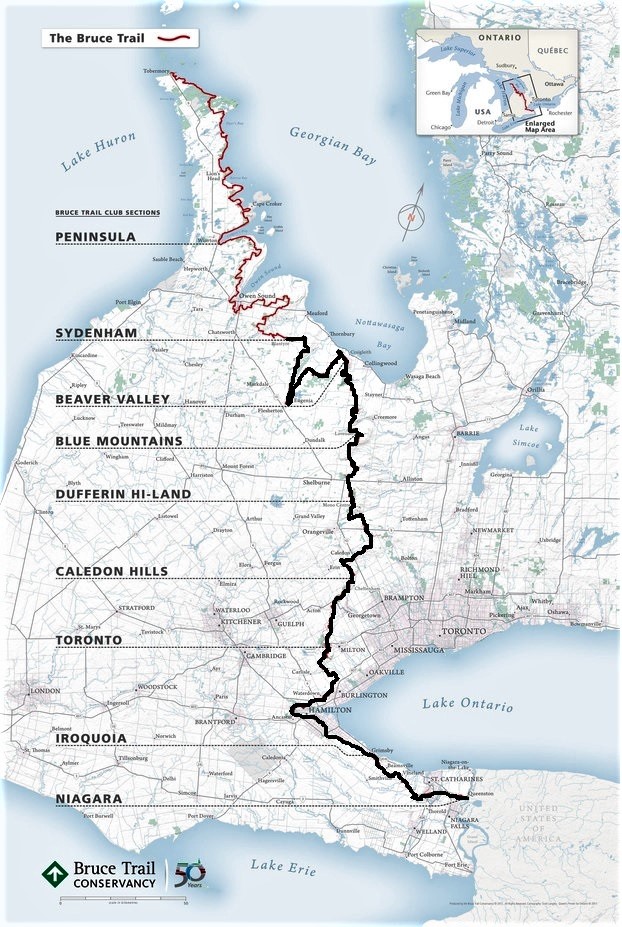 559. Our last hike of 2019 comes to an end at Blantyre. We’ve reached the boundary between the Beaver Valley and Sydenham Club Sections of the Trail. As there is nothing particularly interesting on the ground to mark our completion of the seventh northbound of nine club sections, let’s see how we’re doing in the big picture. The black line on the map above marks the Trail we’ve completed; the red line is what remains to be done. According to the Trail Guide edition 29, we have completed 559.8 km since Queenston, or 62% of the Trail, and have another 338.8 km, or just over one third of the Trail, to go. The Guide’s figure doesn’t quite tally with my own, but with only 1.1 km difference it’s close enough, and the length of the Trail is perpetually changing. As it happens, we have certainly hiked farther than my tally and the Guide’s, as several recent reroutes which I haven’t counted have added length to the Trail. Thanks for accompanying us this far. We’ll be back in the New Year as soon as the weather allows.