594. The view eastward of the Bighead River Valley from a gap in the foliage on the edge of the Escarpment near the Main Trail’s junction with the Waisberg Side Trail. This point is about 350 m above sea level.

595A &B. Has some conceptual artist gone around attaching toilet lids to trees to make a point about ecologically sustainable waste? No, the light blue plastic buckets scattered nearby suggest that there is a seasonal maple sugar tapping operation here.

596. The Trail crosses Grey Road 26 at Woodford Crescent. It’s only about a ten-minute drive from here east into Meaford, the local capital of cottage country on Georgian Bay.

597. In 1603, the Globe Theatre in London, England had to close because of a major outbreak of bubonic plague. 30,000 Londoners, about 15% of the population, died from it that year. The plague mainly afflicted those under thirty years old, whom it killed quickly and agonizingly. The Globe was Shakespeare’s theatre, and the playwright was then in top form. But between 1603 and 1613, the Globe and the other London theatres were shut by plague for a total of 78 months, or 60% of the time. Even then, officials knew that one certain way of reducing the plague’s ability to spread was to stop people from gathering indoors in large groups. Shakespeare’s greatest and darkest tragedy, King Lear, first performed in December 1606, comes from this period: Lear curses his nasty daughter Goneril, “thou art a boil, a plague sore, an embossed carbuncle in my corrupted blood.” He’s calling her a bubo, a swelling on the skin, whose appearance heralds an appalling death. No one at the time would have missed how terrible their relationship must be if a parent could say such a thing to his child.
In October 2019 the Meaford Theatre Company signed a two-year lease with the Municipality of Meaford to use the community centre here in the hamlet of Woodford to stage their annual productions and house their theatrical equipment. They could not know that their new theatre would stay dark for the foreseeable future. Those involved in the performance arts in Meaford, and everywhere else, continue to suffer more anxiety than most during the Covid-19 pandemic, and the future for live theatre in particular seems bleak. But history tells us that if people keep their distance the plague will abate and theatre can return, perhaps more strongly than ever. One hopes that in the meantime government assistance to the performing arts will be generous, and creative ways of mounting safe performances will be developed. 598. Yellow mossy stonecrop (Sedum acre) growing on a rock in Woodford hamlet. Stonecrop can grow in very dry conditions (e.g., directly on the surface of this rock in midsummer) because its fleshy leaves are excellent at retaining water. 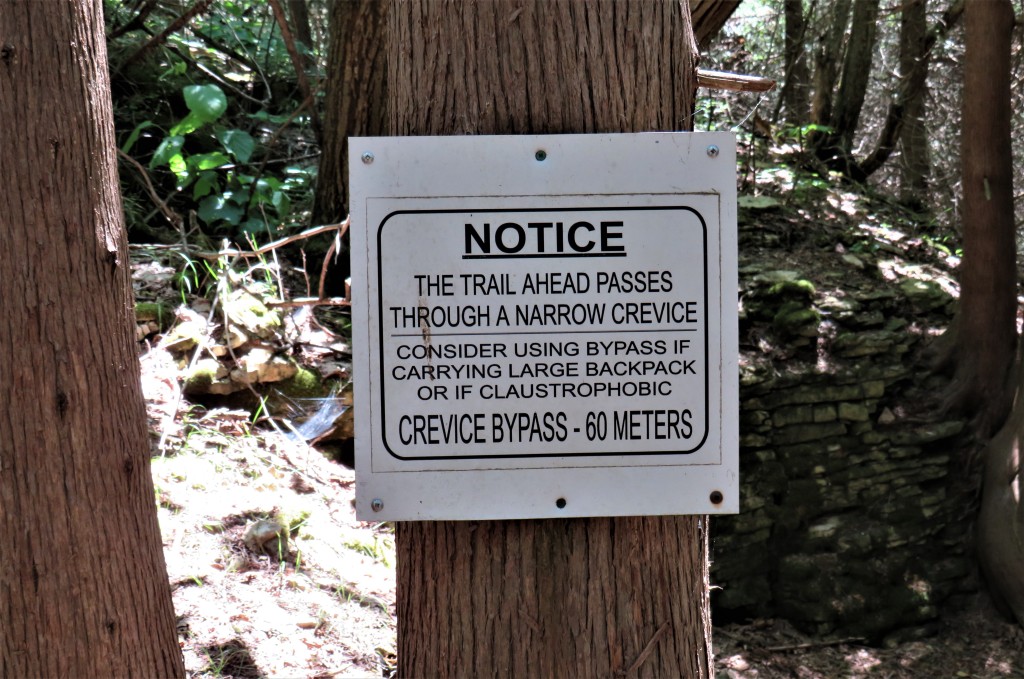 600A &B. … this is definitely the tightest crevice we’ve yet encountered on the Trail. Fortunately our backbacks are modest in size and neither of us is claustrophobic. And once out the other side, we can celebrate: we have reached the 600 km mark, and thus have completed two-thirds of the Trail! 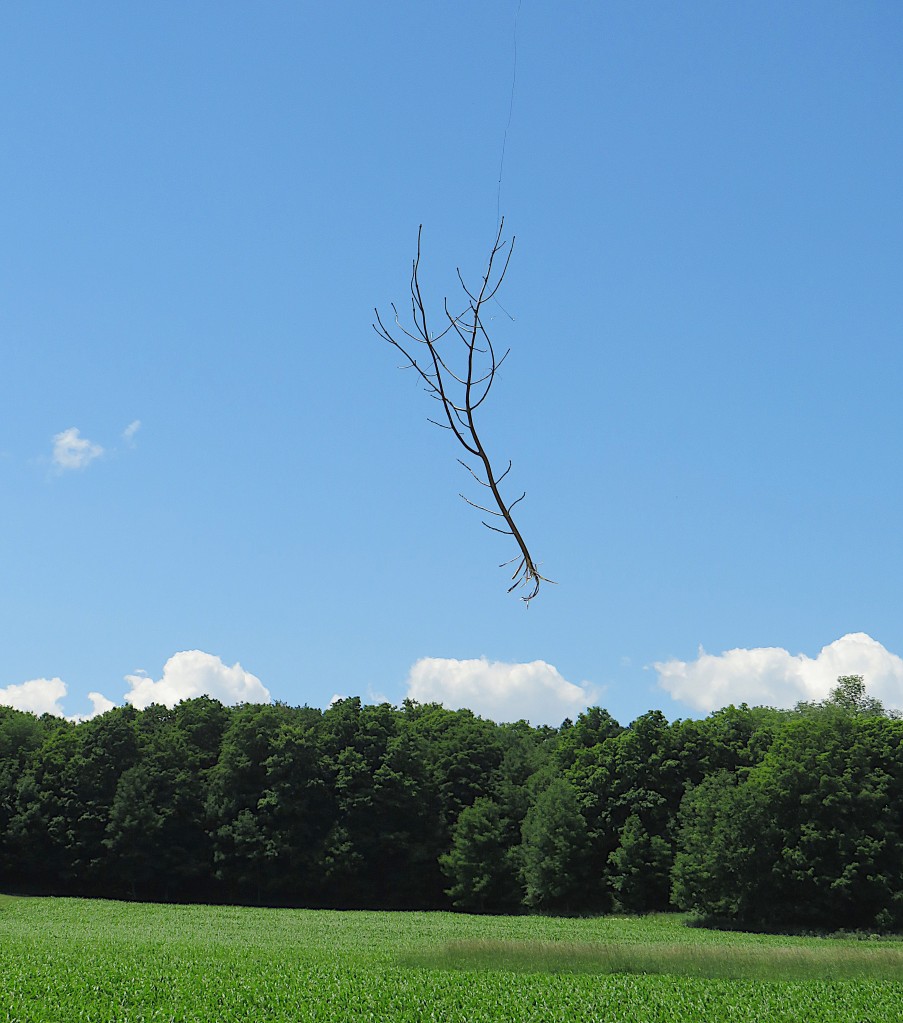 601. A day of mysteries. How did the River Kwai Side Trail get its name? What accounts for the disappearing waterfall at Woodford? And how can this branch be floating in midair above the St. Vincent-Sydenham Townline? There is at least a partial answer to this last mystery: the branch is hanging from almost invisible fishing line wrapped around a power line, though this doesn’t explain why anyone would want to do such a thing in the first place.

602. A little farther up the Townline, we come across this machine slumped like a dinosaur after an asteroid strike. It’s a Volvo wheeled excavator in resting mode with stabilizers in place and its rear dozer blade down. Made in Germany, with a total reach of over 10 m, this is an expensive piece of equipment: a newish one is on sale online for $273,000, though you can pick up used ones for about $70,000. Wheeled excavators are more expensive than tracked ones, as they can be driven from place to place at up to 30 km/h, while crawler excavators have to be trucked around because their tracks damage road surfaces. The two-piece hydraulic boom of this model can be retracted to allow full visibility when it’s being driven. We ignorantly assume that the machine has broken down and are making sarcastic comments about the supposed reliability of Volvos when we realize that the driver is sitting quietly in his cab having lunch and overhearing everything we are saying.

603. A female Eastern bluebird (thanks, George, for confirming identification), a member of the thrush family. The female doesn’t have the male’s predominantly bright blue plumage, but she does have patches of that same blue on her wings and tail. Hard to see what she’s got in her mouth, but it’s probably a large insect. She will have built a nest in a tree cavity and laid three to seven light blue eggs. Her mate will have helped feed insects to their chicks. Bluebird existence is quite precarious: their eggs and nestlings are eaten by chipmunks, ants, and squirrels, while falcons, hawks, owls, and domestic cats prey on the adults. More numerous introduced species like starlings and house sparrows compete for nesting space. However, nesting boxes built specifically for bluebirds have helped to stabilize what was a declining population. 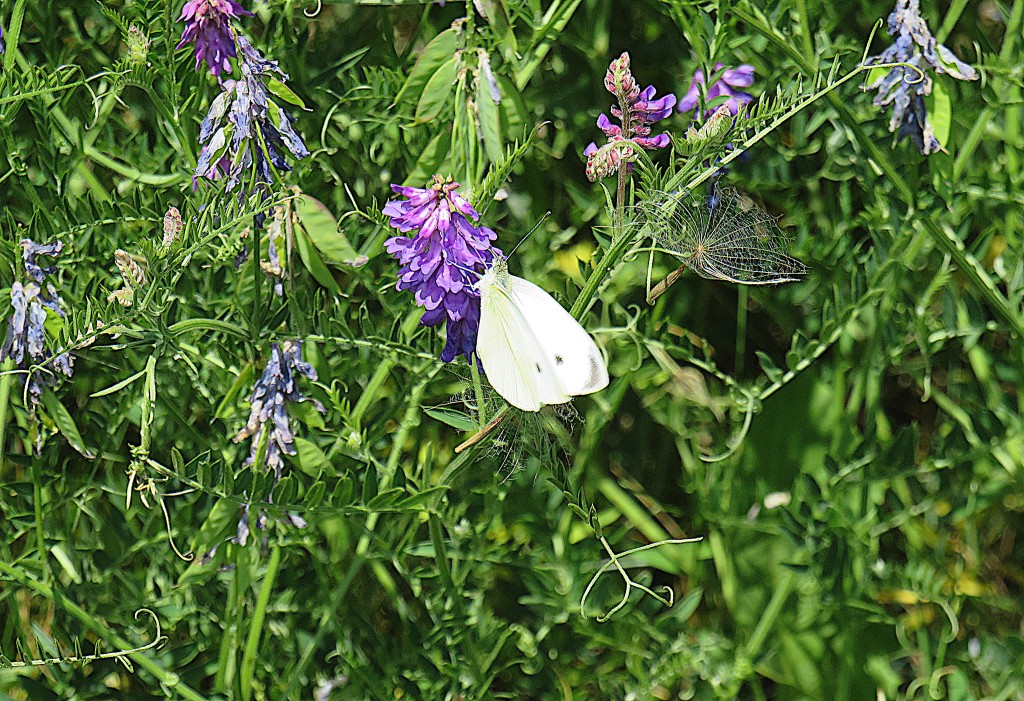 604. A cabbage white butterfly on purple cow vetch (Vicia cracca). The cabbage white, with its lightly dotted wings, was accidentally introduced to Québec from Europe around 1860 and has spread throughout North America. Cow vetch, aside from being popular with butterflies, is also used as cattle forage.

We finish our hike at the Main Trail’s intersection with the Tom Thomson Trail (more about this Trail next time) and walk about 1 km east to where we parked our end car. It isn’t there! But wait, the parking lot at 22 Side Road seems unfamiliar. We soon realize that we must have parked the car in the wrong place: we are at 22 SR at 11th Line, but we left the car a whole long block to the east at 22 SR and 9th Line. What failed to alert us to our mistake when we parked our end car was that at both the right and wrong places, 22 SR has a similar configuration: as a roadway, it terminates at a north-south T-junction, and continues westward only as an unopened road allowance (a rough footpath, in ordinary parlance). Moreover, the Bruce Trail and the Tom Thomson Trail ignore one another’s existence on their maps, or we might have figured out our mistake earlier. However, the majority of blame lies with us: we were not paying sufficient attention, and our punishment was an extra 3.5 km hike along 22 SR eastwards in the heat of the afternoon. To complete today’s hike of 11.0 km, we actually walked 16.5 km. Duh!