618. We admire this contemporary variant on the raised log cabin framed by forest on Sideroad 22. 619. A field of young grain is like a blanket spread on the earth, revealing the gentle contours beneath. 620. A hay bale looms on the crest of a ridge under a foreboding sky. The weight of such a bale depends on its composition, size, density, moisture content, and the efficiency of the baling machine, to name only the major variables. But you can be sure that such a bale is heavy … probably at least 500 kg and too cumbersome to weigh accurately, if you believe farmers’ online discussions. 621A & B. The striking façade of a stone house on Irish Block Road, Annan. 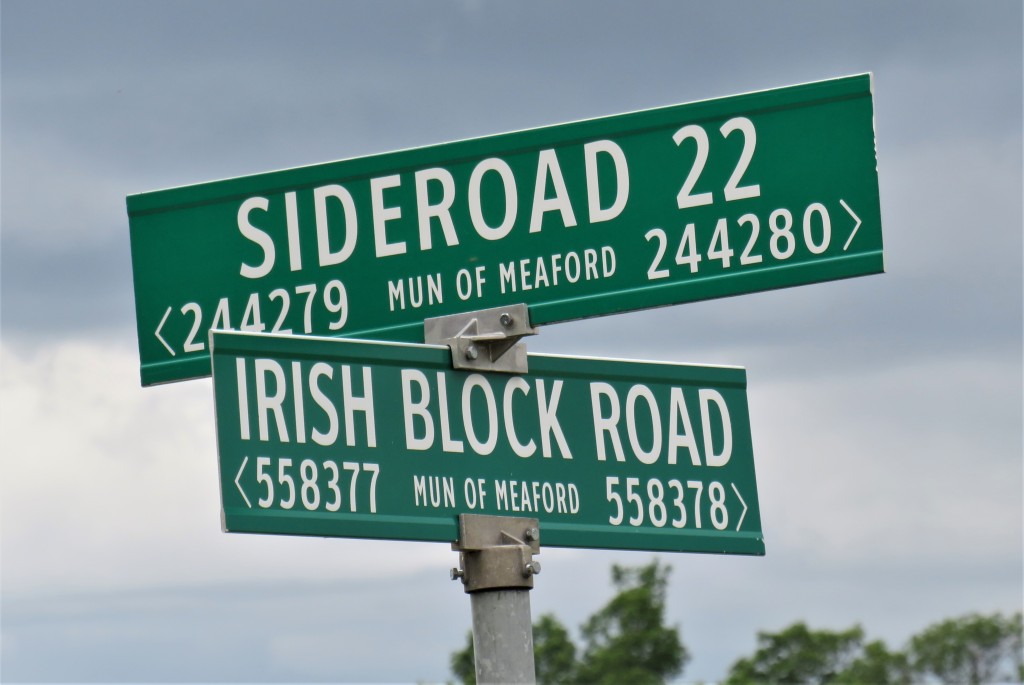 622. “Irish Block Road”? Beginning in 1845, there was a devastating blight on the potato crop in Ireland caused by Phytophthora infestans, a fungus-like microorganism. The infestation caused widespread starvation in Ireland as a result of single-crop dependency and British colonial misrule that exacerbated a bad situation. In 1846, 41 Irish Catholic families managed to escape their stricken homeland and settled to farm land in what was the former Township of Sydenham near Annan. They built a church, St. Michael’s, and their community also boasted a school and post office. The church was demolished in 1977, and all that remains now of their settlement is a church bell mounted on a cairn, a grotto, and a cemetery. 623. The corn is now in its late vegetative stage before it starts tasselling, the sign that its reproductive phase has begun. The tassel, the male flower that produces pollen, will soon appear on the top of the plant. 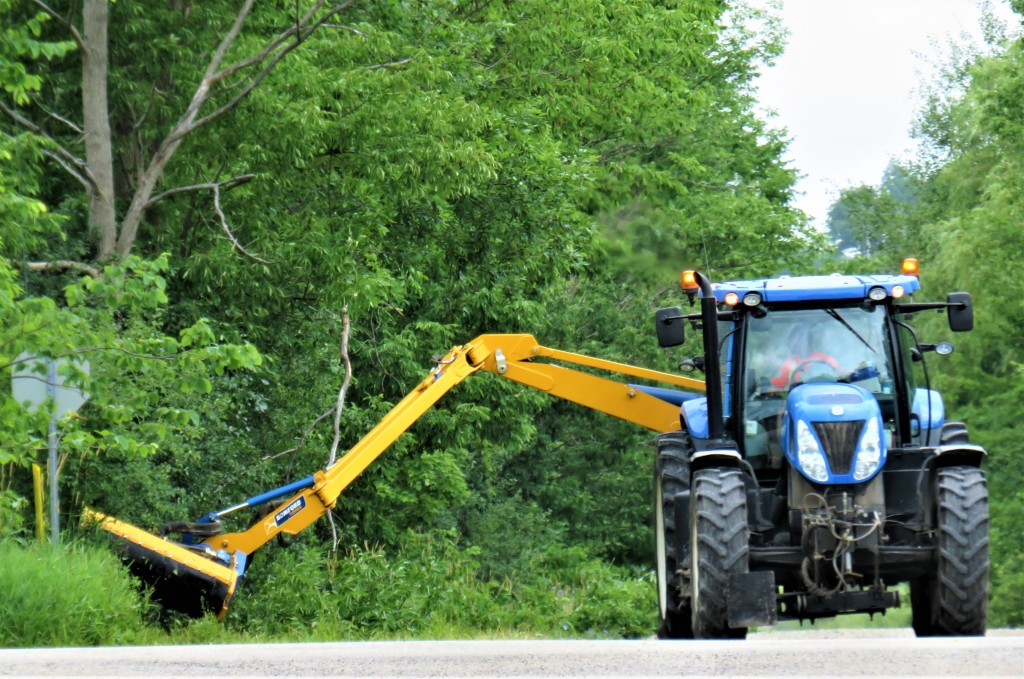 625. The Trail itself through Sydenham Forest is pitted with deep crevices that demand our full attention on where we put our feet. One of our vacuum-insulated steel water bottles slips down one of these black holes, far beyond our capacity to rescue it. It will no doubt remain there until rediscovered in perfect condition thousands of years hence by alien colonizers of Earth, the water in it having stayed as cool and fresh as when it was poured. 626. A precarious natural bridge, one of the elaborate karst formations found at the edge of the Escarpment here in Sydenham Forest. 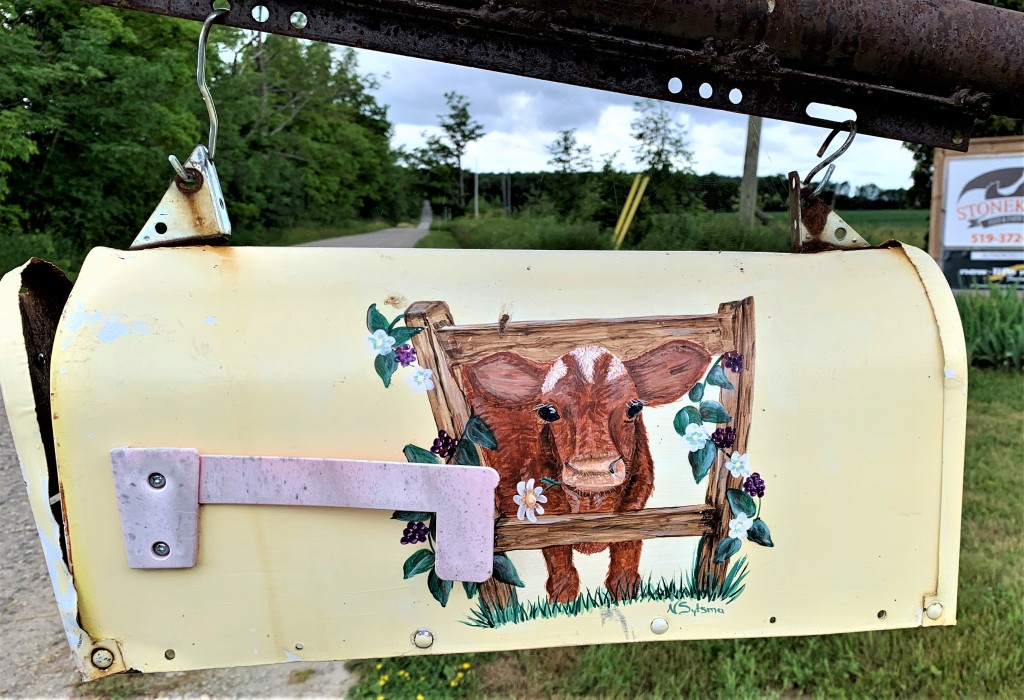 627. A hand-painted mailbox belonging to a dairy farm on Sideroad 22. 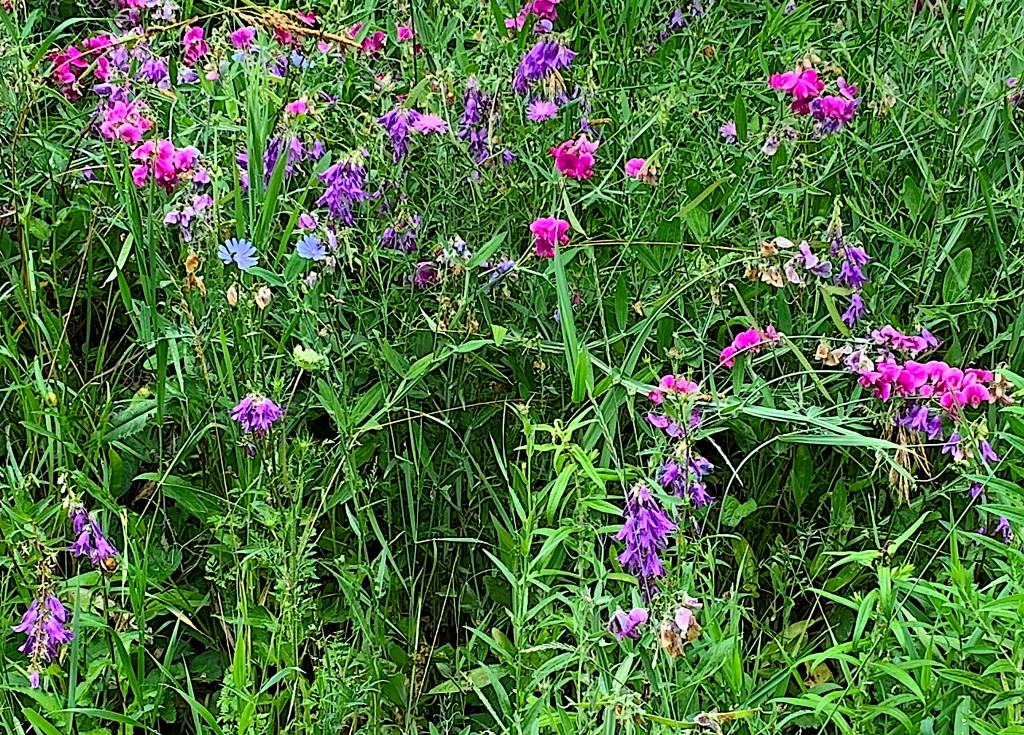 629. An overgrown boardwalk across marshland west of Sydenham Forest. 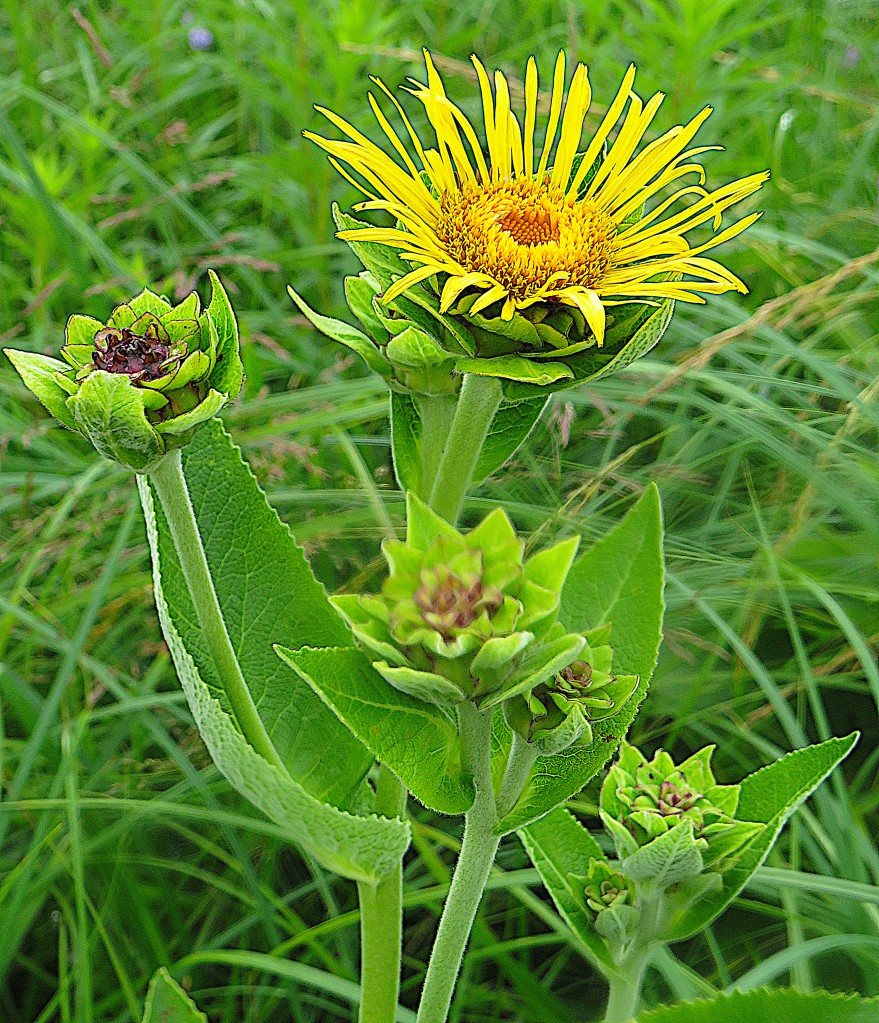 630. What looks like a small sunflower is elecampane (Inula helenium), also called horse-heal, an import from the Old World. Its strange English name derives from Medieval Latin enula compana: compana simply means “of the countryside,” while enula may be a corruption of Helena, as there was an ancient Greek legend that the plant originally sprang up where Helen of Troy’s tears fell as Paris abducted her to Phrygia. Medieval Europeans ate candied elecampane roots as sweetmeats, and drank elecampane wine, an infusion of the root with sugar and currants in white port. Maud Grieve in A Modern Herbal (1931) noted, “Some fifty years ago, [elecampane] candy was sold commonly in London as flat, round cakes being composed largely of sugar and coloured with cochineal. A piece was eaten each night and morning for asthmatical complaints, whilst it was customary when travelling by a river, to suck a bit of the root against poisonous exalations and bad air. The candy may still be had from our confectioners, but now containing no more of the plant Elecampane than there is of barley in Barley Sugar.”