Go back to Part 1

Leaving Hamilton, the Rail Trail now enters the Dundas Valley. You can find a detailed map of this section at the Hamilton Conservation Authority website.

The Dundas Valley is about 10 km long, about 2-3 km wide, and lies at the very western tip of Lake Ontario. It’s formed by a tight turn in the Niagara Escarpment, which from above looks like a U lying on its side with its open end toward the Lake. The Valley offers a beautifully varied post-glacial landscape, one of the finest in Ontario. The Rail Trail bisects the U, gently climbing in a more or less straight line as far as Sulphur Springs Road, then ascending the head of the Valley in two great half-loops.

It’s late April after a long winter in a suburban area of Dundas. The post on the right indicates that we are at kilometer 1 of the Rail Trail. Large single-family dwellings line the Trail on both sides. This part of the Trail is well-used, as it allows pedestrians and cyclists access to Dundas’s only shopping mall. And it’s a nice place to walk the dog.

These wayside blue flowers are one of the earliest signs in this area that spring is on its way. They are Chionodoxa forbesii or glory-of-the-snow. Their poetic name derives from their ability to bloom through melting snow. Apparently they derive from southwest Turkey, but they look quite at home here in Dundas.

Some Dundas homeowners don’t seem happy that a public trail runs behind their property. But even attack dogs need exercise, and surely a quiet Trail is more fit for that purpose than a railroad line! 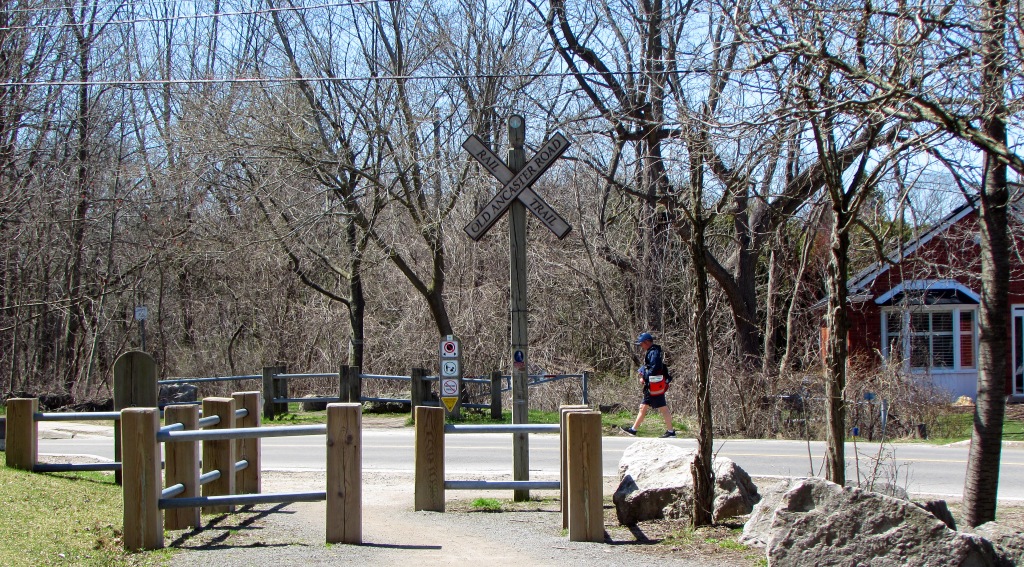 A letter carrier does his rounds as the Trail crosses Old Ancaster Road. This scenic, twisty road connects Dundas and Ancaster, two of the oldest settlements in what was once Upper Canada, then became Canada West, and is now Ontario. Since 2001, both Dundas and Ancaster have been part of the amalgamated city of Hamilton. 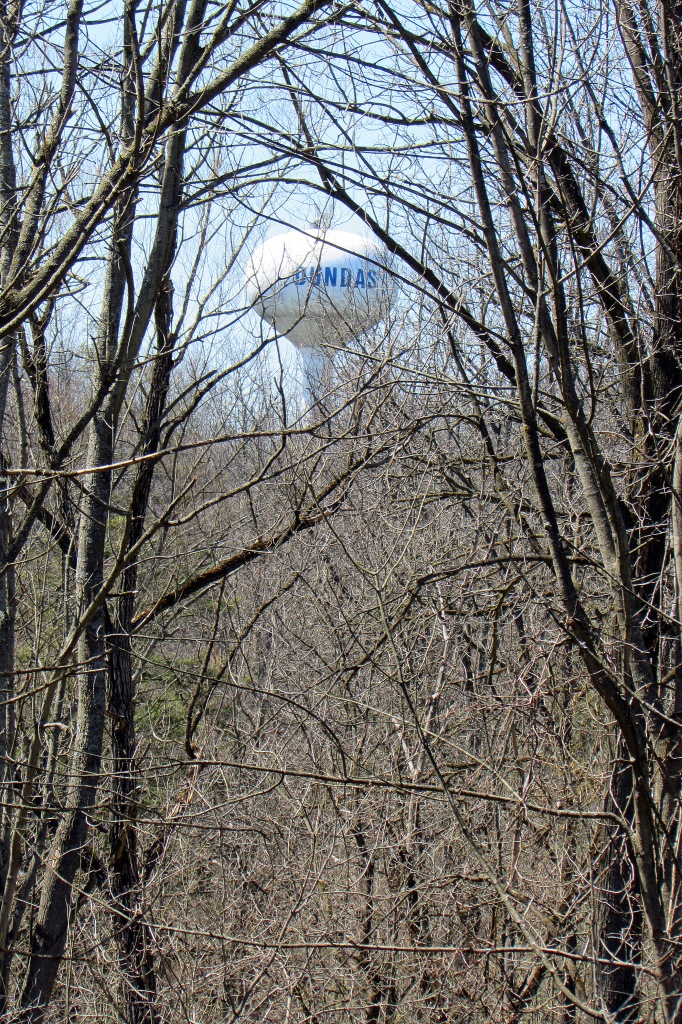 Around the 3 km mark, the Dundas water tower looms to the right through still leafless foliage. Hidden by this tangle, the beautiful Spring Creek Trail, following the irregular course of the creek toward central Dundas, runs alongside the Rail Trail.

Suburban encroachment is a fact of life in the Dundas Valley. McMansions tower over the south side of the trail here, requiring elaborate retaining walls to stop them from slipping into the steep Spring Creek valley. The wealthy will pay a premium to have an elevated view over the Dundas Valley, regardless of how their property affects the view from the Valley.

At the 4 km mark, we enter Conservation Lands. Now there are dense woods on both sides of the Trail. The Rail Trail is perhaps the least spectacular of the 40 km of trails in the Dundas Valley, but unlike the others it can be enjoyed in almost all weathers.

By the 5 km mark, we have left most suburban pedestrian traffic behind. Now we are in a realm ruled by cyclists, who like the firm surface of this well-drained trail, largely uninterrupted by busy roads. A reasonably fit cyclist in good weather can easily cover the 64 km from Hamilton to Brantford and back in one day. 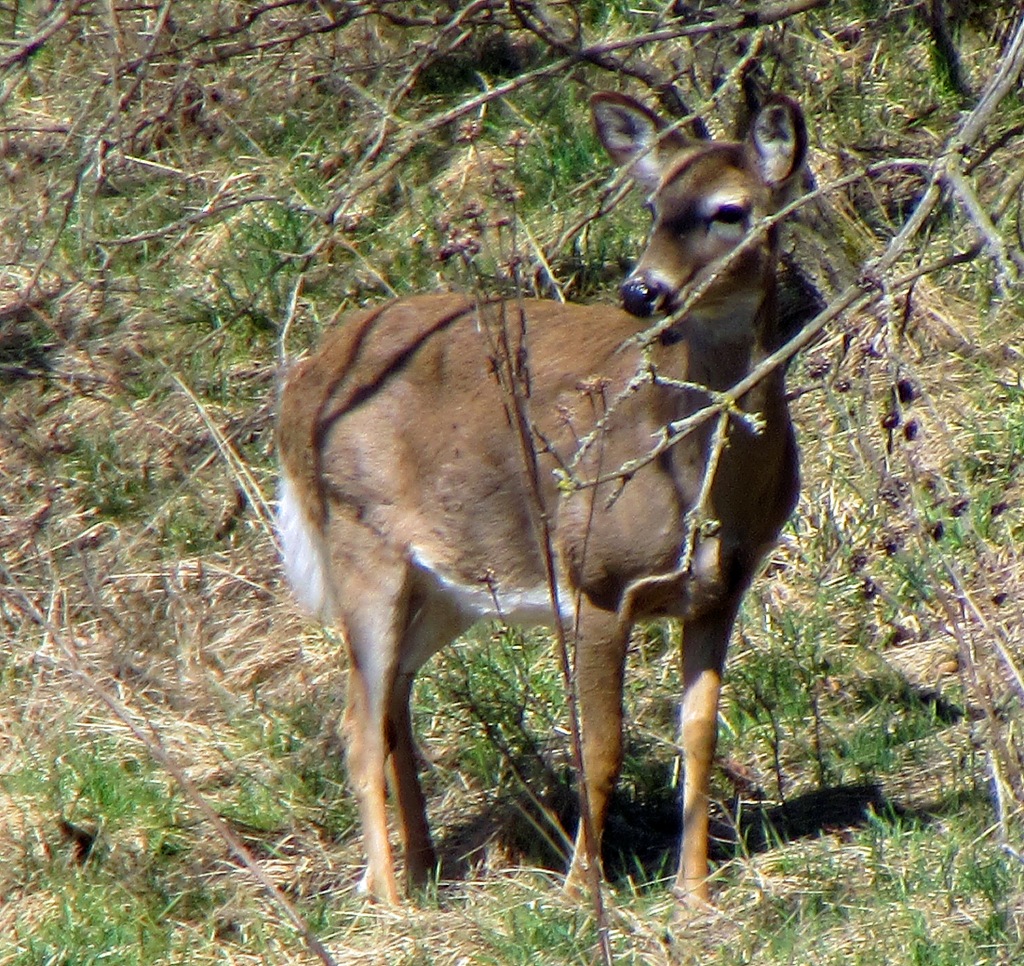 Though most of Spring Creek Valley is densely wooded, there are a couple of open meadows to the right of the Trail, where if you’re lucky you’ll spot one …

… or more of the white-tailed deer that frequent the area.

Another 700 m … and out of nowhere, railroad tracks suddenly begin! Is that a train ahead?

No, just a couple of refurbished old rail cars. The purple “Manitoba” executive coach was built in 1929 for Canadian Pacific Railway. The green baggage car was built in Hamilton in 1931 and donated by Canadian National Railway. Steps on the other side allow you to peer inside the cars.

And there’s a train station too! Except it isn’t really a station, nor was it ever one. It’s the Dundas Valley Trail Centre, constructed in 1977 in the style of a small Victorian train station. The “station” contains a small natural history museum, a snack bar, and restroom facilities. The building is popular with film companies seeking period locations. 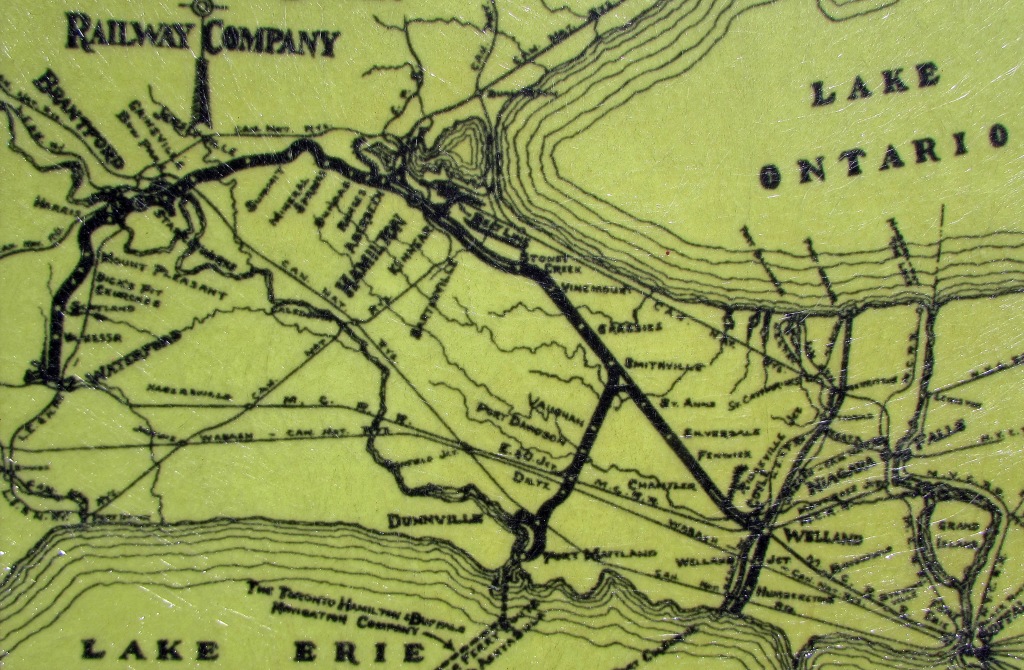 While we’re on the subject of trains, the abandoned railroad whose course we’re following was part of the Toronto, Hamilton and Buffalo (TH & B) Railway, a road (1892-1987) which, in spite of its name, never reached either Toronto or Buffalo! Wits claimed that TH & B stood for “To Hell and Back.” A TH & B Historical Society preserves the memory of this railway. The 1954 map above shows the TH & B network confined chiefly to Hamilton, Brantford, and the Niagara Peninsula. Some of the lines are still in use, but the section between Hamilton and Brantford was abandoned after flooding on the Grand River washed out the track. Soon after, the process of converting it to an interurban multi-use trail began. Information boards about TH & B can be found by the Trail Centre.