135. This fine rural scene greets us as we start from Governors Road. Horses are grazing on the hillcrest, and a well-kept, classic barn occupies the middle ground. The traditional rusty red colour of North American barns predates commercial paint. It comes from the time when barns were coated with a mixture of linseed oil and actual rust (red iron oxide), to keep at bay mildew and other fungi that cause wood to rot.

136. The absolutely still surface of McCormack’s Pond, just off the McCormack Trail, allows hikers a pause for reflection. (The McCormack is one of the Dundas Valley Conservation Area Trails that the Bruce shares.)

137. We emerge from the woods at the edge of Dundas Valley Golf and Curling Club and soon find ourselves at the west end of King Street, Dundas’s main drag. The Bruce Trail Conservancy Headquarters is only a few hundred metres from here, down a short side trail into an industrial area. Some of the many attractions of the town of Dundas include art and craft galleries, fine examples of 19th-century domestic architecture, and well-kept gardens, lush thanks to the protective embrace of the Valley. The Picture Perfect Cake and Art Gallery (yes, they sell custom-made cakes as well as artworks) ticks all those boxes. 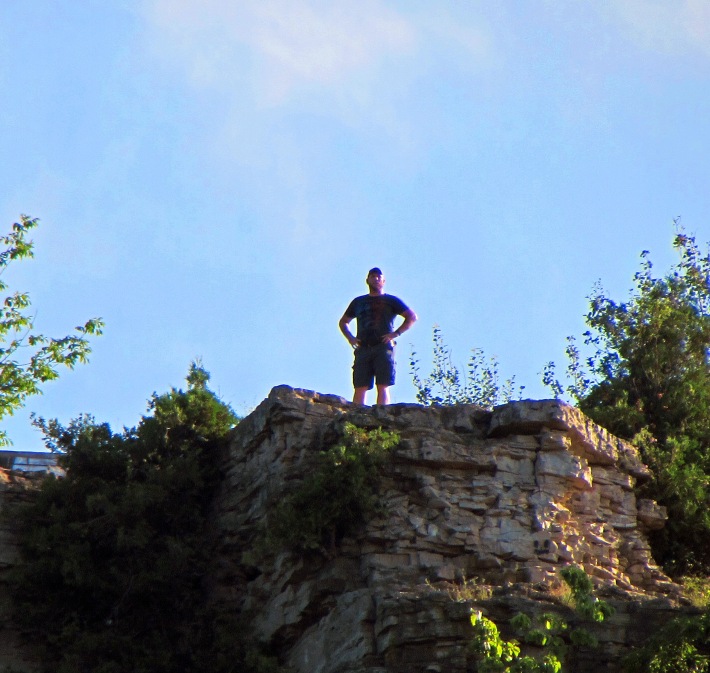 138. The Dundas Peak looms over the far west end of town. From the scene at left, the camera’s zoom picks out this solitary figure standing on the edge and surveying the panorama. At 110 metres, twice the height of Niagara Falls, the Peak is one of the highest local points on the Escarpment. It offers spectacular views over the Valley, and it’s a favourite selfie spot (and a very dangerous one) for those who like to dangle parts of their bodies over the edge and then record their “Peak Moment” on social media. At weekends in summer the unfenced summit swarms with day-trippers, who reach it by a Bruce side trail from a parking lot on top of the Escarpment.

139. The Bruce’s route through this part of the Dundas Valley is chiefly through the town itself. This may seem like a lost opportunity, as the stretch of Escarpment that overshadows Dundas to the north includes not only the Peak and the adjacent spectacular Spencer Gorge but also two of the finest local waterfalls. But this part of Dundas is very attractive, and there will soon be panoramas aplenty. Here the Bruce runs along quiet, residential Melville Street. The name alludes yet again to Henry Dundas, 1st Viscount Melville, who may be the most excessively over-memorialized historical figure in southern Ontario. Not only did he never visit these shores, but he fiercely opposed the abolition of slavery, and was impeached for misappropriation of public funds. (He was acquitted, but never held office again.) 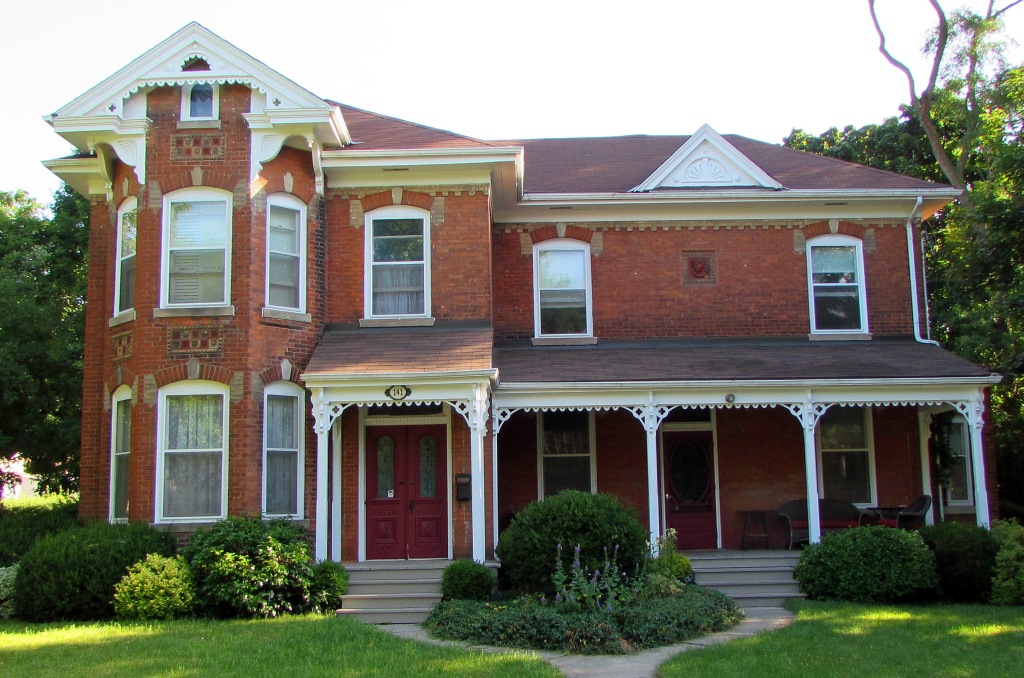 140. It’s doubtful that the good citizens of Dundas today care about their association with a dodgy 18th-century Scottish political fixer. This imposing brick house on Melville Street represents one of many excellent examples of Ontario domestic architecture of the late 19th century in this part of Dundas. Note the fine decorative bargeboard and trim. 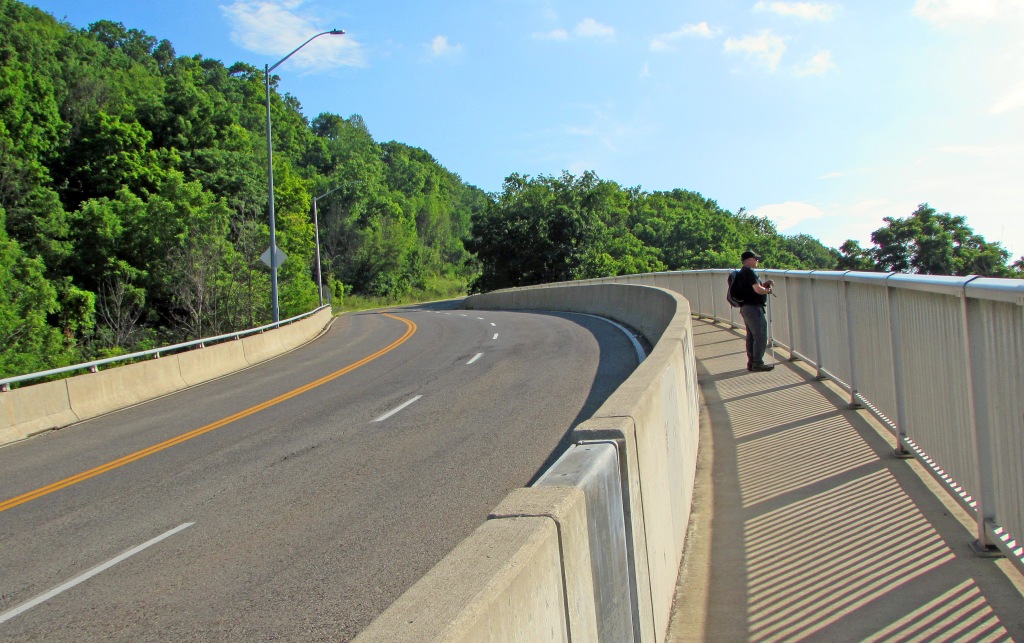 141. We are starting to climb steep Sydenham Road, one of only three roads out of Dundas to the north. This one attains the full height of the Escarpment in one kilometre. Mike gazes at the view of the Dundas Valley to the south …

142. … and the towers of downtown Hamilton far to the southeast. The edge of the Mountain can be seen near the centre of the image, as can its flat top stretching all the way to the right edge. Two hikes ago, we went from left to right all the way along that ridge. Now we’re standing high on the bottom arm of a valley shaped like a U lying on its left side, looking at the top arm about 5 km away, with the town of Dundas nestled between the arms and Cootes Paradise at the mouth. 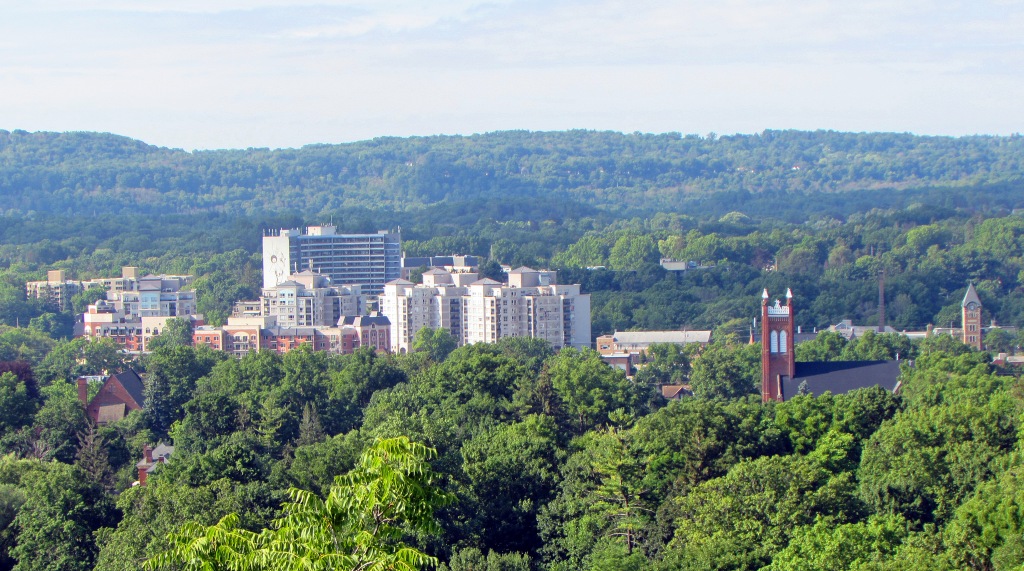 143. From here, Dundas seems almost engulfed in trees. The brick tower of St. Augustine’s Roman Catholic church pokes up at near right, and to the right of that is the slender Venetian-style stone tower of Dundas’s old post office. The modern high-rise apartment buildings indicate the recent suburbanization of the town. And indeed Dundas, though the older settlement and still geographically distinct, has been part of the much larger amalgamated City of Hamilton since 2000. 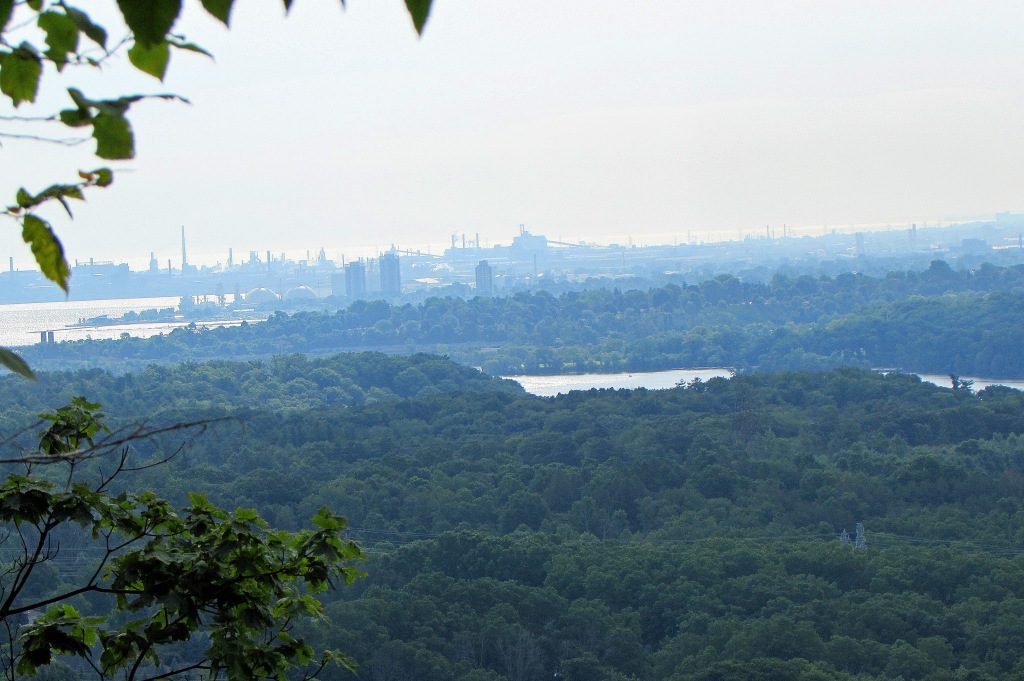 144. As we climb higher, the view to the southeast expands. That stretch of water at centre right is Cootes Paradise, a shallow lake that forms the extreme western tip of Lake Ontario, though it’s separated from the main Lake by gravel-and-sand bars at both ends of Hamilton Harbour. The Harbour can be seen to the left, lined by heavy industry, including the steel plants that once formed the basis of Hamilton’s economy.

145. Even its Latin name, Toxicodendron radicans, sounds alarming! There are signs posted here at Rock Chapel warning hikers of its presence, as there should be. For this three-leaved menace looks so innocuous. It is of course poison ivy, and the active agent is urushiol, an oily substance that causes severe allergic reactions in most people on contact. To avoid painful rashes and blisters, it’s important to remove traces of this oil with soap and water immediately after contact. Better still, don’t touch the stuff! 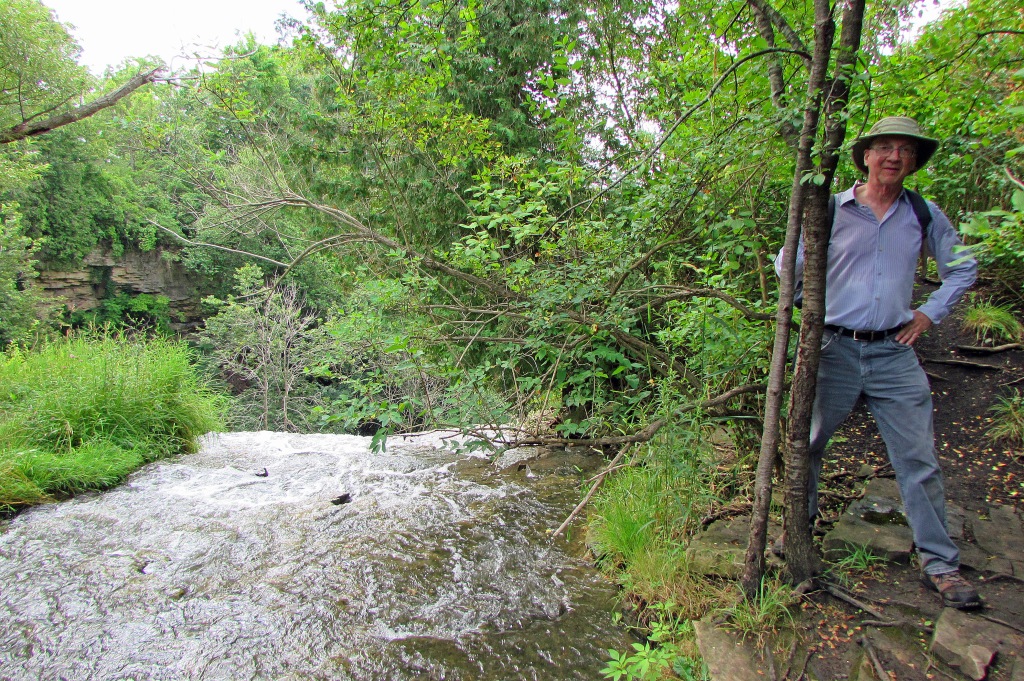 146. Nick poses by the lip of Borer’s Falls. This is a narrow, 15 metre high waterfall where Borer’s Creek plunges off the top of the Escarpment and heads downhill to drain into Cootes Paradise. (The Borer family once ran a sawmill here.) This area is the property of the Royal Botanical Gardens of Ontario. The RBG maintains a large swath of publicly accessible forested land around Cootes Paradise, as well as several formal gardens a short distance away on the border between Hamilton and Burlington. The RBG are careful custodians of this Greenbelt land.

147. Queen Anne’s lace is prominent by the wayside as we come to the end of today’s hike. The plant’s beautiful (and very suitable) name obscures the fact that it is actually the wild carrot (Daucus carota), of which the domestic vegetable is a cultivar. Arguments persist about which Queen Anne the flower is named after, and whether it should be considered an invasive weed. I prefer to recall “Queen-Anne’s-Lace” (1921) by William Carlos Williams, a love poem alluding to the overlooked qualities of this all-too-common plant. It begins:

Her body is not so white as
anemone petals nor so smooth – nor
so remote a thing. It is a field
of the wild carrot taking
the field by force; the grass
does not raise above it.

And that’s a good place to end today’s hike.