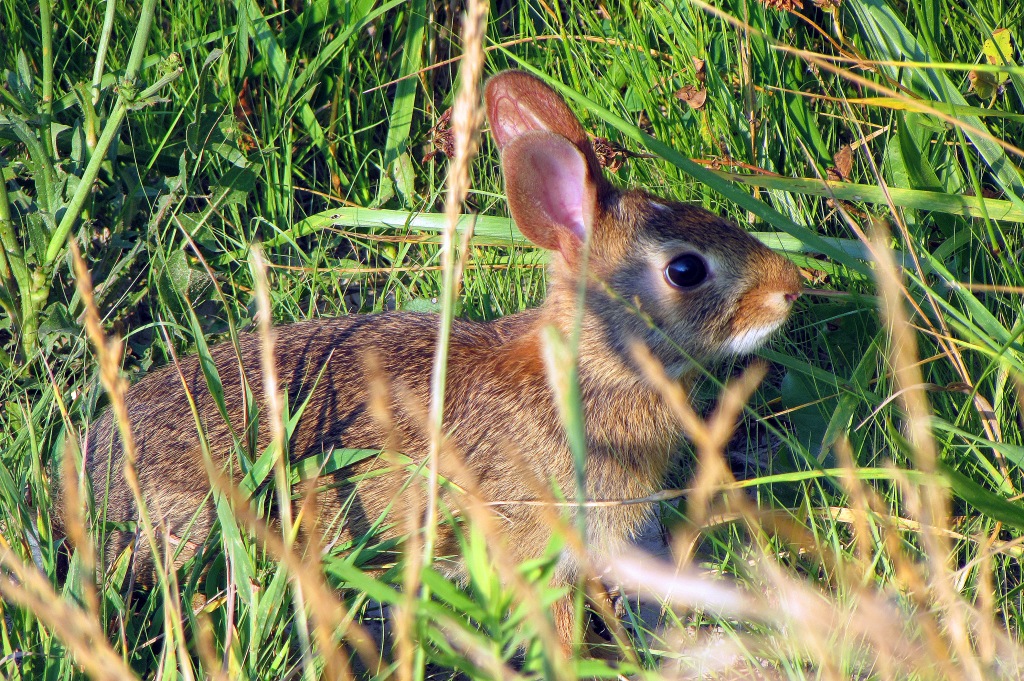 122. I’ve always thought that it’s good luck to see a rabbit at the start of a hike. This may or may not be true for me, but a rabbit is definitely a good omen in general. The experts tell us that the presence of rabbits (and deer, and field mice) in particular indicates that an area can support a rich and varied fauna. 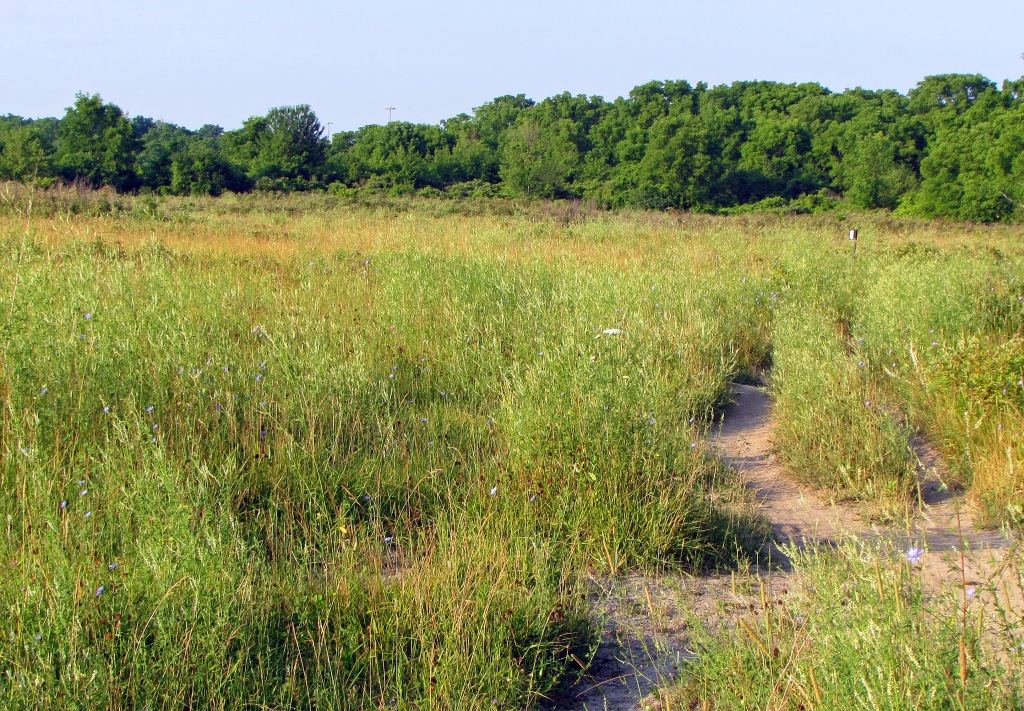 123. We’re now going through Iroquoia Heights Conservation Area in Ancaster. This area is known for its large population of white-tailed deer, and indeed we surprise one (or she surprises us) in the long grass by the Trail. But she lopes away too quickly to be photographed. Like the name of our local Bruce Trail Club, Iroquoia takes its name only indirectly from the Confederacy of six First Nations now known as the Haudenosaunee. Rather, it refers to Lake Iroquois, the glacial lake, somewhat larger than the current Lake Ontario, whose shoreline reached up here (the top of the Escarpment) during the last Ice Age.

124. Smug retirees, we watch from the Bruce Trail footbridge as early morning commuter traffic pours northeast along Highway 403 towards Hamilton and Toronto. This highway descends the Escarpment steeply then slaloms around the end of Cootes Paradise. The 403 also serves as the western part of the Hamilton ring road, and like all the main highways in the area, is frequently congested. Widening these roads does little to ease the pressure of traffic, thanks to rapid low-density suburbanization and poor public transit. A single bad accident or ill-timed construction can tie up vehicles for hours.

125. It’s a good year for blackberries, though you have to act fast to beat the birds. If the berries shrivel on the vine, it’s more likely caused by a fungal infection than by the hot sun.

126. We are entering the Dundas Valley, where the Niagara Escarpment makes a tight U-turn and the Bruce shifts from a westerly to a northerly course. The first highlight is Sherman Falls, a 17 metre terraced ribbon waterfall on Ancaster Creek. It’s named after the family of Clifton W. Sherman (1872-1955), the American-born founder of the Dominion Steel Castings Company in 1912. This company, later known as Dofasco, and now officially called ArcelorMittal Dofasco after the Luxembourg-based conglomerate that owns it, remains Hamilton’s leading steelmaker.

127. Sherman Falls is on private land, as the sign on this concrete overlook reminds us. We Bruce hikers are grateful to private landowners who allow us passage through their property. However, let’s not ignore a larger issue here. Setting aside who owns what, does this overlook improve or detract from the beauty of Sherman Falls? The answer is simple. The overlook improves the view of the private owner who stands on it, but for everyone else it’s an ugly excrescence marring a lovely ravine.

128. Time for a short rant. The Dundas Valley is one of the most beautiful places in southern Ontario. Its beauty is a public good, and the disfigurement of its natural vistas by inappropriate construction erodes that good. A fair portion of the Valley is protected by the Hamilton Conservation Authority, and contains over 40 kilometres of public trails. But the wealthy like to build McMansions abutting Conservation Area land – for the “unspoiled views,” of course. The sign above shows the solid red path of the main Bruce Trail through the Valley. The Trail used to go from the tip of the black arrow to Canterbury Falls and then west along what is now a looped side trail. This section was closed when a landowner refused public access, forcing the main Bruce to divert around three sides of a rectangle. The landowner acted legally. But why is there no legislation in Ontario to protect long-established public rights of way, like the Bruce Trail, through private land? Simply put, people are not so keen to build mansions on land where there is a public right of way protected by law. There should be such legislation: it may be the best way to deter encroachment on Conservation Areas – and the only way to save the Bruce Trail from being relegated to the hard shoulder of public roads in this densely populated area. Point made, rant over!

129. A red squirrel in typical pose in the Dundas Valley. These small rodents are omnivores, eating conifer seeds, mushrooms, tree sap, insects, bark, birds’ eggs, and even nestlings. Hard to see what this one’s munching, but I think it’s a piece of mushroom. The Dundas Valley contains one of the northernmost tracts of Carolinian forest in North America. You can definitely find tulip trees and sassafrass here, and the red-eyed vireo, southern flying squirrel, and Jefferson salamander are also reputed to have a toehold in the Valley. 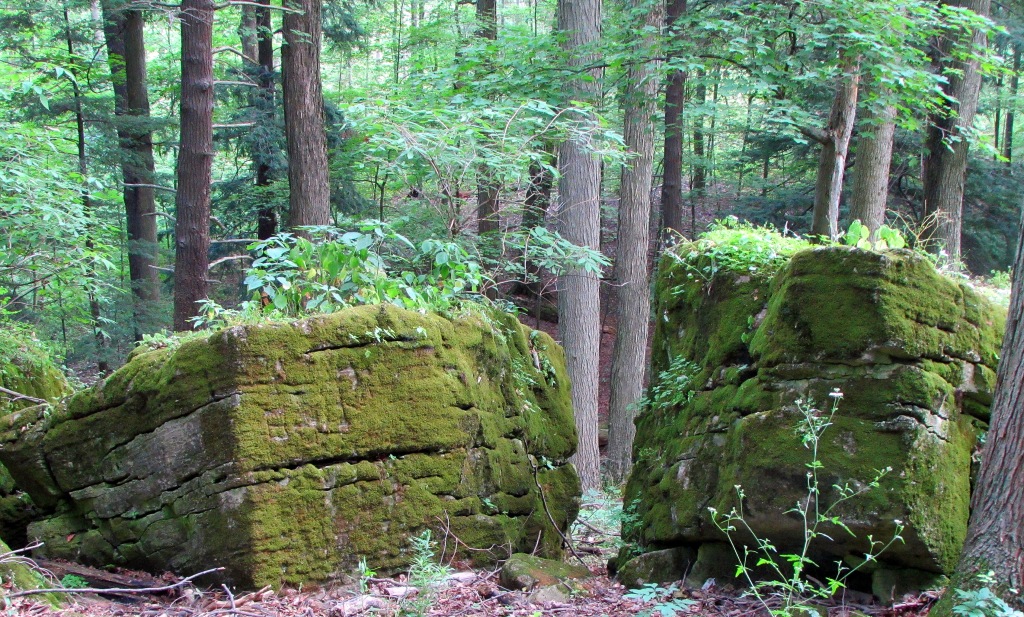 130. The Bruce Trail shares almost all of the course of the Main Loop, the central trail in the Dundas Valley Conservation Area. On this beautiful section there are several almost sculptural juxtapositions of the inanimate and organic worlds, such as this.

131. The Hermitage was a summer residence built in 1855 of local limestone by George Gordon Browne Leith, a wealthy Scottish immigrant. It was destroyed by fire in 1934. Since then it stood in ruins, but in 2016 its facade was stabilized and partially reconstructed by an expert stonemason. It now serves as a local Ancient Monument, the Stonehenge of the Dundas Valley. It’s a destination for spooky guided walks that promise encounters with the spectral coachman of Ancaster. And you can hire the Hermitage as a wedding venue, though as it lacks a roof you should probably make provision for inclement weather! 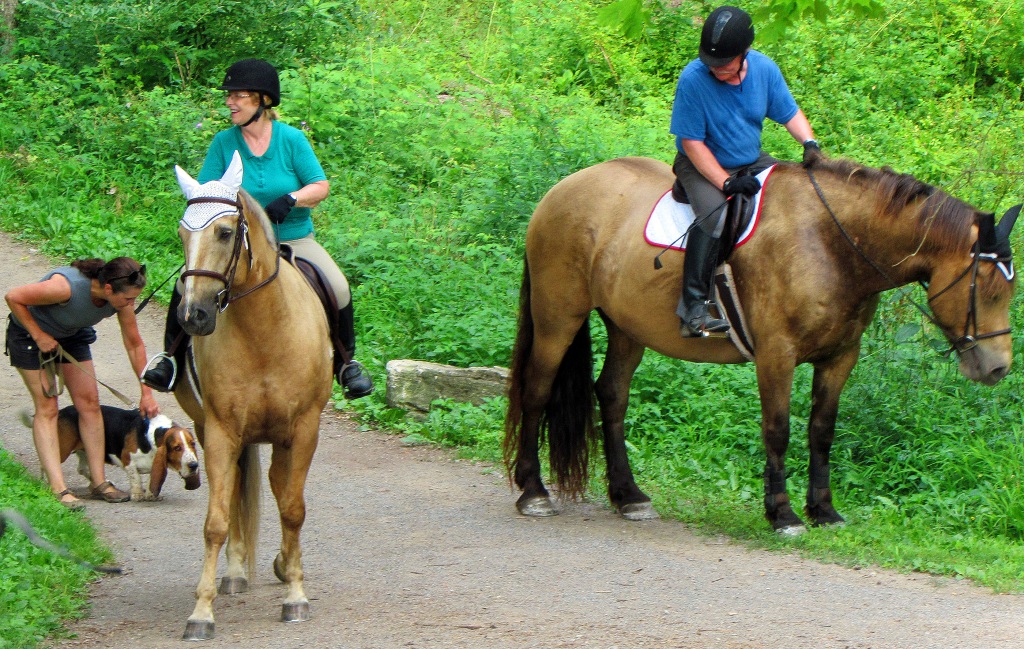 133. The Trail Centre at the Dundas Valley Conservation Area stands near the intersection of the Bruce Trail/Main Loop with the Hamilton to Brantford Rail Trail. This may just be the most important trail crossroads in the region. The building, constructed in 1977, is a simulation of a late Victorian train station; there never was a real station on this site. The Trail Centre contains a small natural history museum devoted to the Niagara Escarpment. The rail line is genuine, however: it’s a short section of the now defunct Toronto, Hamilton and Buffalo Railway that used to pass this spot. Standing permanently on the rails are two authentic old railcars used for educational purposes: a 1929 executive coach and a 1931 baggage car.

134. Our endpoint today is Governors Road on the western edge of Dundas. There seems nothing exceptional about this stretch of country road, but it is historic. This was the very first highway ever constructed in what is now Ontario. John Graves Simcoe (1752-1806), first Lieutenant Governor of Upper Canada, began this road in 1793, to connect the Ontario Lakehead at Cootes Paradise to his intended capital at London. He named it “Dundas Street” after his friend, the Scottish politician Henry Dundas (who never set foot in Canada). As it grew, the settlement at Cootes Paradise took on the name of the road that began there, so the town of Dundas was born. (Most people assume Dundas Street was named for the town, but it’s the other way around!) As we know, York (later renamed Toronto), not London, became the capital of Upper Canada. So Dundas Street was extended there too, becoming one of Toronto’s major thoroughfares. But none of this explains why this section of Dundas Street is called Governors Road. Could it simply be that “Dundas Street, Dundas” sounds a bit awkward?