270. On Escarpment Side Road, just before we come to the pedestrian tunnel under Hurontario Street (Hwy 10), we spot this new house for sale. It’s advertised as a development by Shane Baghai, the Toronto luxury condo king turned Caledon organic beef farmer. The 5,000+ sq. ft house has 5 bedrooms and 5 bathrooms and sells for $3,950,000.

271. Across the road there’s another worthy addition to our Pompous Portal album. And between the wrought iron gates and the sugar maples in their fall finery … an entrance lodge! No self-respecting McMansion is complete without one of these! We advise that an armed security guard be permanently installed therein to deter Bruce Trailers bent on mischief.

272. Just across Hurontario Street, we come across this simple, charming heritage property on a grassy knoll, a brick cottage with a slightly saddle-backed roof. It’s known locally as the Maxwell-Haney House and was built in about 1850. It’s currently used by the Devil’s Pulpit Golf Association, and boasts no entrance lodge.

273. What’s left of milkweed pods in late October. The botanical term for these seed-bearing pods is follicles. The pods also contain white, silky hairs known as coma or floss. This floss is grown commercially as a hypoallergenic filling for pillows. When the follicles ripen, they split open, and the seeds, carried by the coma, are dispersed by the wind.

274. A Bruce-blaze-bearing post against a grey sky in this open, hillocky area where the Trail briefly departs from Escarpment Side Road. In the early days of the Trail, apparently, sections of white venetian blinds were nailed onto trees and posts as blazes. That’s exactly what these blazes look like! 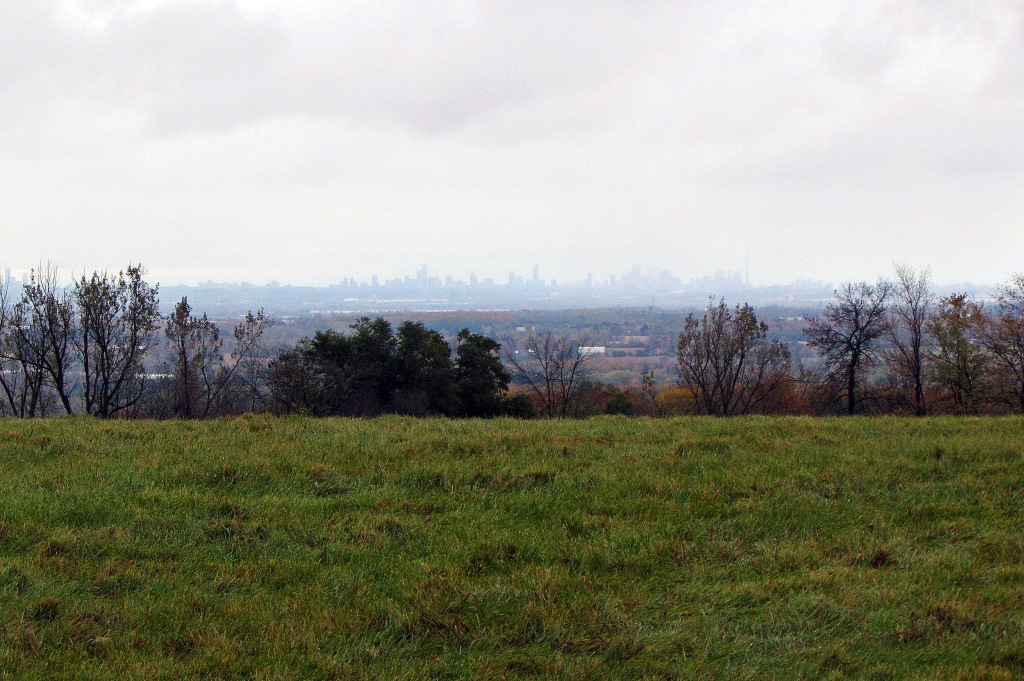 275. We feel we should have left urban civilization behind long ago, but it seems we’re not out of the orbit of the GTA quite yet. In fact, this open field even on this cloudy day gives us a distant view of the Toronto skyline, including the CN Tower almost 60 km away but just visible on the horizon at right centre.

276. This is Escarpment Side Road, which we follow for most of today’s hike. At right … 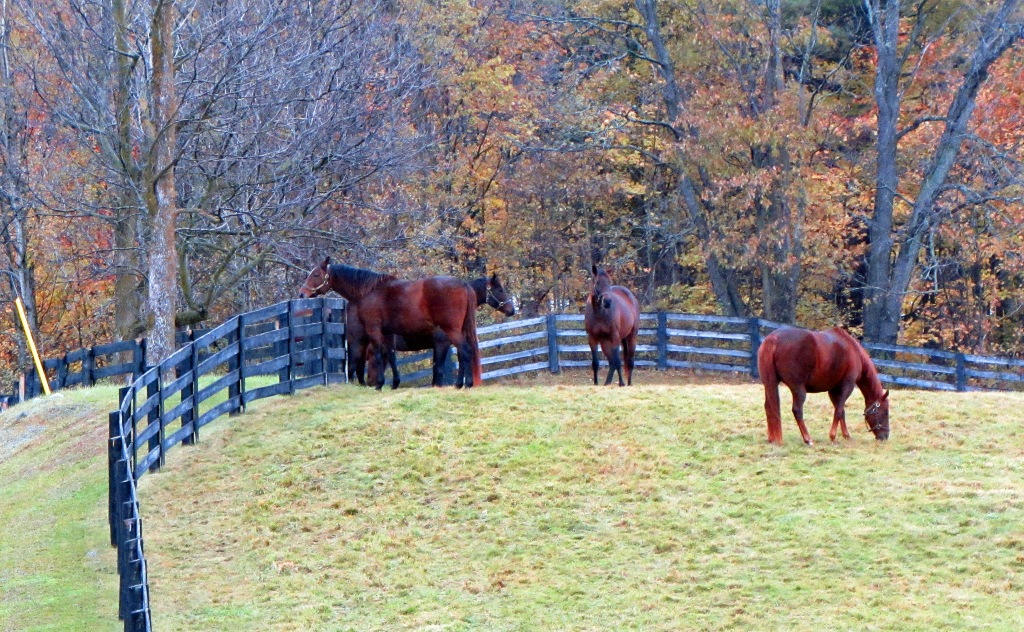 277. … are some distinguished members of Caledon’s equine community …

278. … but not too distinguished to come over and check us out.

280. A white-breasted nuthatch (Sitta carolinensis) defies gravity by clinging upside down to a telephone pole on Escarpment Side Road. These little birds run up and down tree trunks, holding on by foot power alone, and probing crevices for insects, rather like woodpeckers. They’re often seen with chickadees, and, though shyer than their fellow-travellers, have learned from them to pose cutely while soliciting humans for food. They will even feed from one’s hand when natural sustenance is scarce. This one is eagerly checking us out for sunflower seeds or suet. As we fail to provide either, its disappointment becomes evident.

281. A rustic split-rail fence demarcates this property. This is a “snaked” fence that doesn’t require posts, which Mike assures me is the traditional way to build one. The fence timber used in this part of Ontario is typically eastern cedar, plentiful and almost impervious to rot. Such zigzag fences are particularly suited to rocky ground where posthole-digging is difficult. The rails can be secured with nails or wire, easily moved to match a new property line, and easily disassembled if the wood is needed for something else.

282. St. Andrew’s Stone Church is one of the few pioneer churches remaining in the area. This part of Caledon Township was settled by Scots, for whom Andrew the Apostle is the patron saint. The first church here was a small log building built in 1830. This, the second church, was built of local fieldstone in 1853, its floor boards cut from local trees, its seats sections of tree trunks with boards laid across them. “Gum fanadh beannachd Dhe air Eaglais na Cloiche!” (Scottish Gaelic: “May the blessing of God rest on the stone church!”) 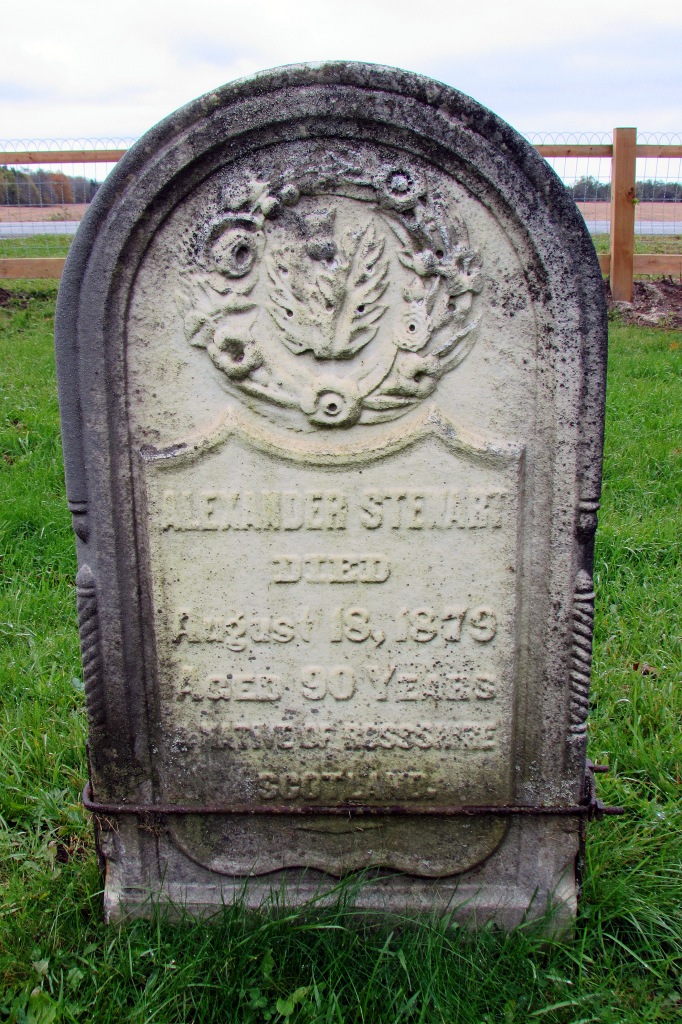 283. Sadly, the church is locked up, so we explore the surrounding cemetery. This gravestone records under a Scottish thistle that “Alexander Stewart died August 18, 1879 aged 90 years, a native of Ross-shire, Scotland.” Mr. Stewart was therefore probably born in 1789, the year of the Storming of the Bastille that marked the beginning of the French Revolution. George Washington had been elected first President of the United States earlier that same year.

284. This unlikely sight greets us as we walk northwards along the shoulder of Airport Road (Hwy 7). It’s the Wat Lao Veluwanaram of Ontario, a Theravāda Buddhist Temple constructed by the Laotian community. The adherents of the faith migrated from Laos to Ontario from 1975 on to avoid persecution in their home country. The lot on which the Temple stands was purchased in 1997 and the Temple completed in 2006. It was the first in North America built to traditional Laotian standards.

285. Three statues in the peaceful Temple garden. On the far left, a reclining Buddha about to enter Nirvana. In the middle, a seated Buddha in a state of meditation. And at right, the laughing monk Budai, representing contentment and abundance. What a delightful and unexpected end to today’s hike!