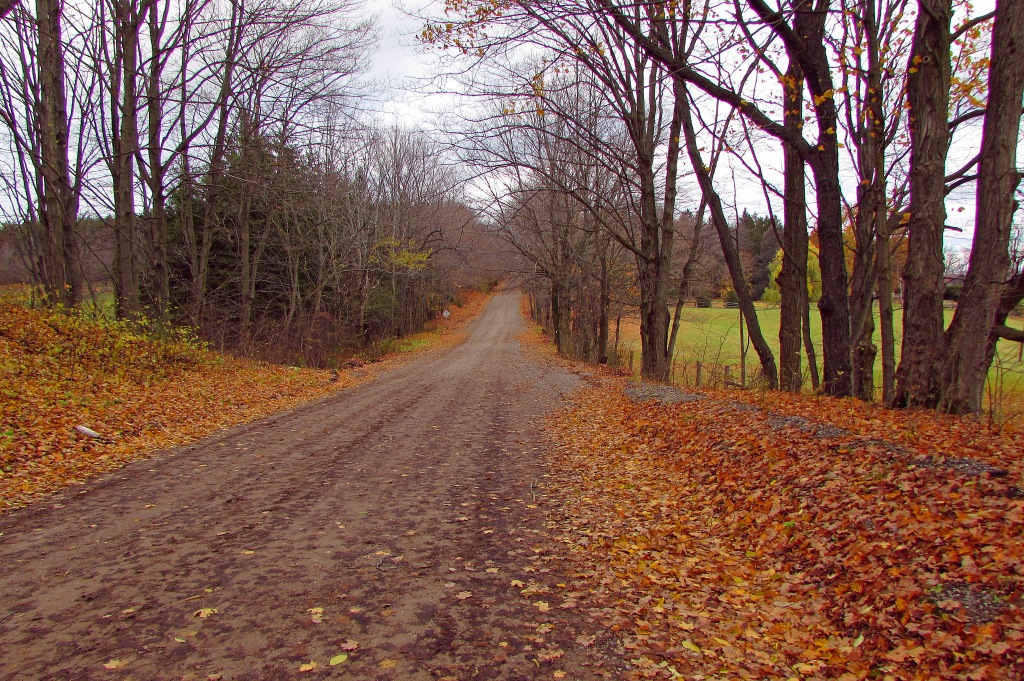 286. A cool day in early November as we set out northwest on Innis Lake Road. The weather is cool (3C) and cloudy with occasional flurries, but there’s no snow on the ground. 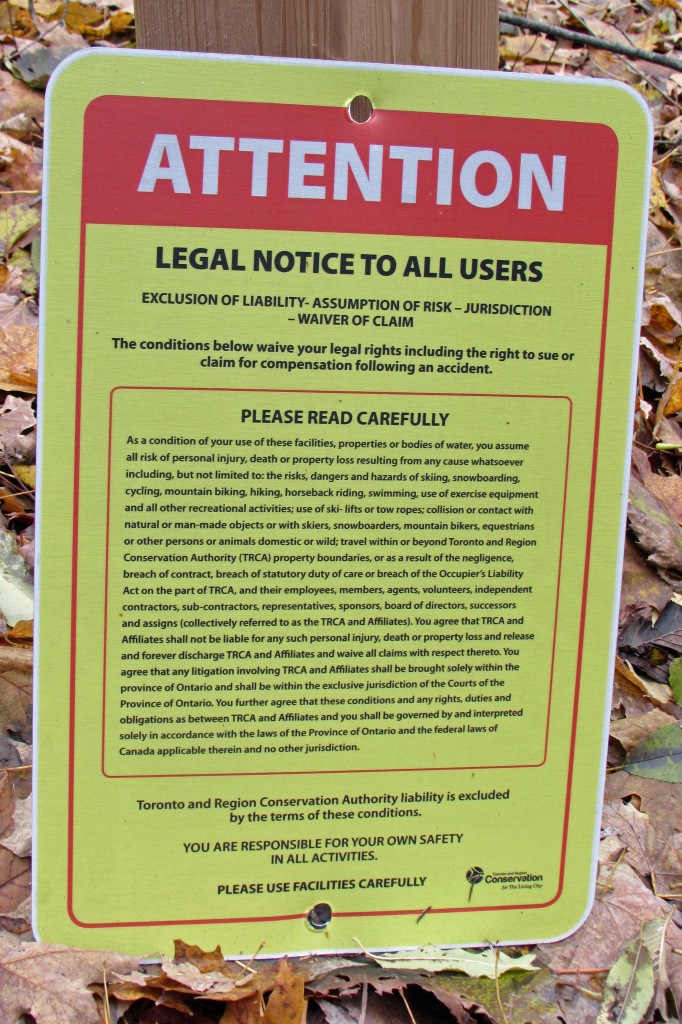 287. As we enter the unopened road allowance, dear me! Liability-denying small print has reached the Bruce Trail! And not only that, there’s also a hollow wooden post next to this sign with something called a “TRAFx Trail Counter” hidden within it. This device allows Toronto and Region Conservation Authority (TRCA) “to count the amount [sic] of people using the trails.” It assures us that it is not a camera and that our images are not being captured. That’s a relief, as I was contemplating suing TRAC, sorry TRCA, for capturing my image without my consent, a clear violation of my right to privacy in a public place. [Insert ironic emoji.] So, what’s the Toronto RCA doing, laying down the law in this definitely non-urban neck of the woods? (For the answer, see 289 below.) 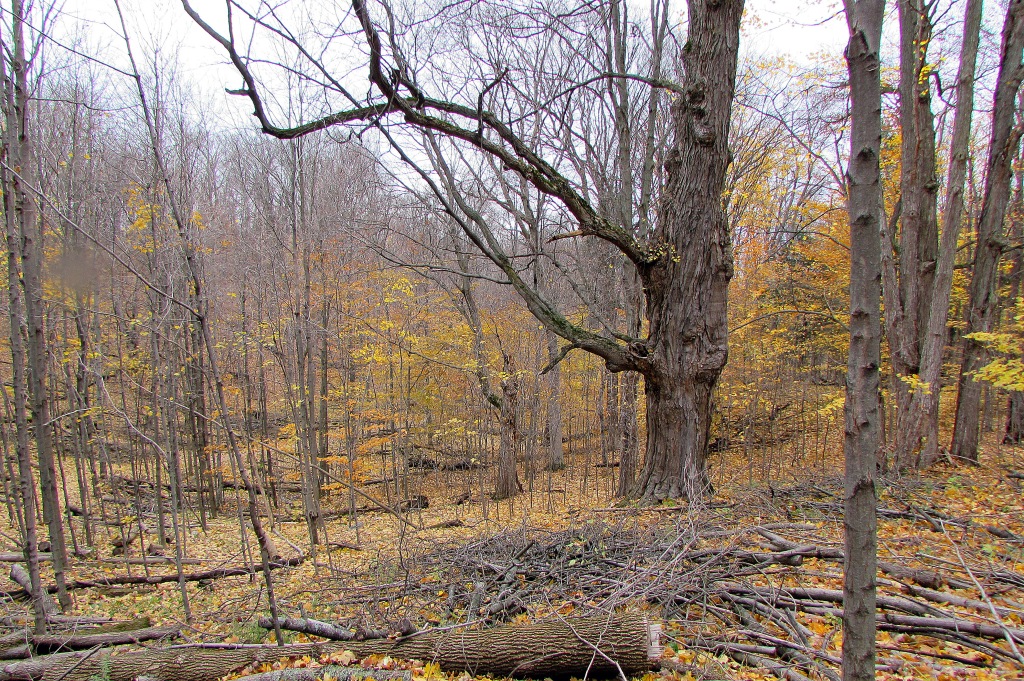 288. A moraine is rocky, gravelly debris left by a retreating glacier. A lateral moraine is formed at the side of a glacier, a terminal moraine at its snout. Oak Ridges is a lateral moraine running north of and parallel to the Greater Toronto Area and meeting the Niagara Escarpment right about here. Thanks to the long-gone river of ice, the landscape here is attractively uneven, and we descend into the Dingle, a suitably poetic name for this lovely steep narrow wooded valley.

289. At the bottom of the Dingle, we ford this shallow creek, one of the numerous headwaters of the Humber River. The Humber is the main waterway flowing into Lake Ontario through the western part of the City of Toronto. Its course was historically the main portage route between Lakes Simcoe and Ontario. Its French name before 1759, Rivière Taronto, indirectly lent muddy Fort York its current moniker. And though we seem a million miles from the megalopolis, our location in the Humber watershed accounts for why we are on TRCA land.

290. This spiky green stuff is interesting. Up close it looks like miniature bamboo, but actually it’s a kind of horsetail (Equisetum), a unique genus of plant related more closely to ferns than anything else. These examples are probably the unbranched kind of horsetail called “scouring rush” that likes damp leaf litter. Equisetum is a living fossil, directly descended from the giant tree-like horsetails of the Devonian period approximately 400 million years ago. It has no known medicinal properties, and though some people cook it like asparagus or eat it raw, it may be mildly toxic when consumed in quantity. Its rough stems were once useful to scour cookware, hence “scouring rush.” 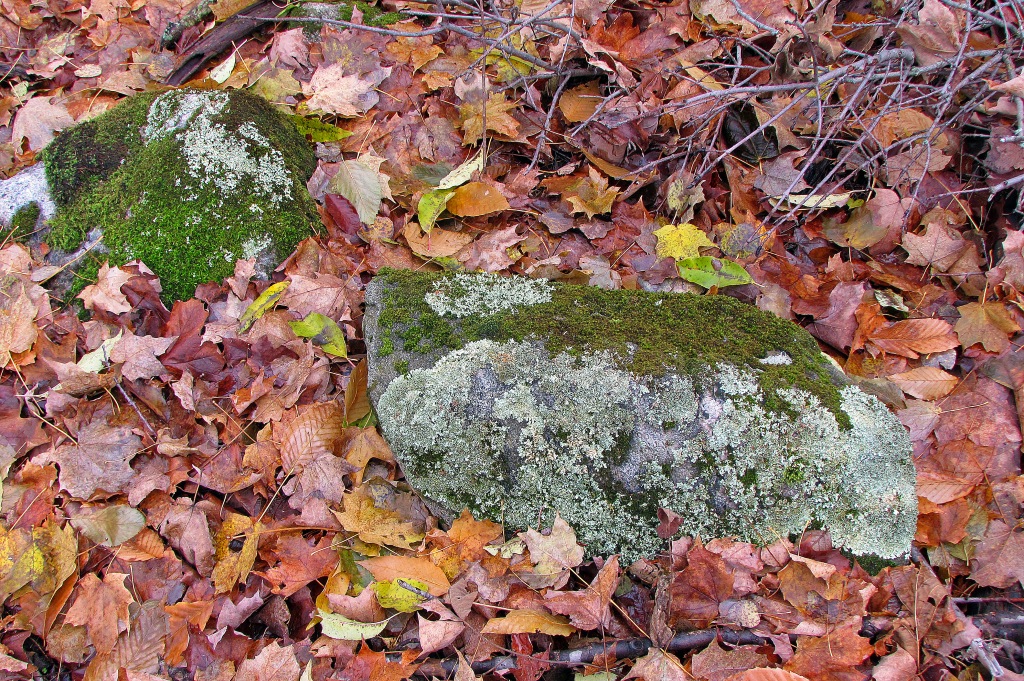 291. Dark-green moss and light-green lichen in Glen Haffy Conservation Area. These organisms, which look similar and seem to be able to share the same rock peacefully, are quite different. Moss is a simple plant, while lichen is a composite of fungi and algae.

292. This is the view southeast from Humber Heights, overlooking the headwaters of the Humber River. There’s a fine panorama despite the gloomy weather. But it’s not immediately obvious that there’s little that’s natural about this spot. We are actually standing on surplus material from a gravel pit that has been piled on the edge of the Escarpment for the better part of 200 years.

293. The gravel in the area was originally deposited over Escarpment bedrock by a glacier that melted about 13,000 years ago. Turning 180 degrees, we see the shallow bowl of the gravel pit now being reclaimed by nature. The gravel was quarried from the early 1800s through the early 1980s, and used in road building and construction. As we have seen, the quarrying industry has long been a threat to the integrity, even the existence, of the Niagara Escarpment. It has become the chief task of the Bruce Trail Conservancy to protect as much as possible of the Escarpment from further inroads and to allow its human-inflicted wounds to heal.

294. The stile leads us over to 7th Line in Mono. Mono? Ace toponymologist Alan Rayburn notes, “Much speculation surrounds the source of the name.” When “Mono” first started being used in 1821, Sir Peregrine Maitland, then Lieutenant Governor, was known to be fond of Spanish names. Mono is Spanish for “monkey,” “attractive,” and “jumpsuit” among other things. Or could “Mono” be derived from an Algonquin word meaning “Let it be!” or from a Gaelic word meaning “hilly”? The local pronunciation of the placename is “MOH-nuh.” Was it named for Mona, the (non-existent) daughter of Shawnee chief Tecumseh? Or for Mona, the Roman name for the Isle of Anglesey? No one knows. All we can conclude is that it is unlikely to have been named for an infectious disease to which teenagers are particularly susceptible. Or for a cute monkey in a jumpsuit.

295. We pass this fine barn on 7th Line. Between the two wagon wheels affixed to the upper wall are a pair of vintage double-tree horse yokes, and from the lower stone wall hang two large cart wheels and one small one. Quaint rustic decoration using objects associated with bygone forms of transportation? Certainly, but to a folklorist there’s always more to it than that.

296. I’d guess that the wheels serve as apotropaic talismans, that is, as magical symbolic objects intended to turn away bad luck from the building where the farm’s wealth is stored. Compare the Medicine Wheel of First Nations, or the ancient Daisy Wheel solar symbol found throughout Europe. These wheels on the barn are positioned like two pairs of eyes keeping watch over the public road. And the yokes? Well, I’ll leave those to a real folklorist who knows what s/he is talking about …

297. A couple pass us on 7th Line lugging a small spruce, and we wish them Merry Christmas. And as soon as we get off road, there’s the explanation. A ready-cut pile of Christmas trees, just waiting to be carried off! A bit too early and too awkward for us to take advantage of, I fear. 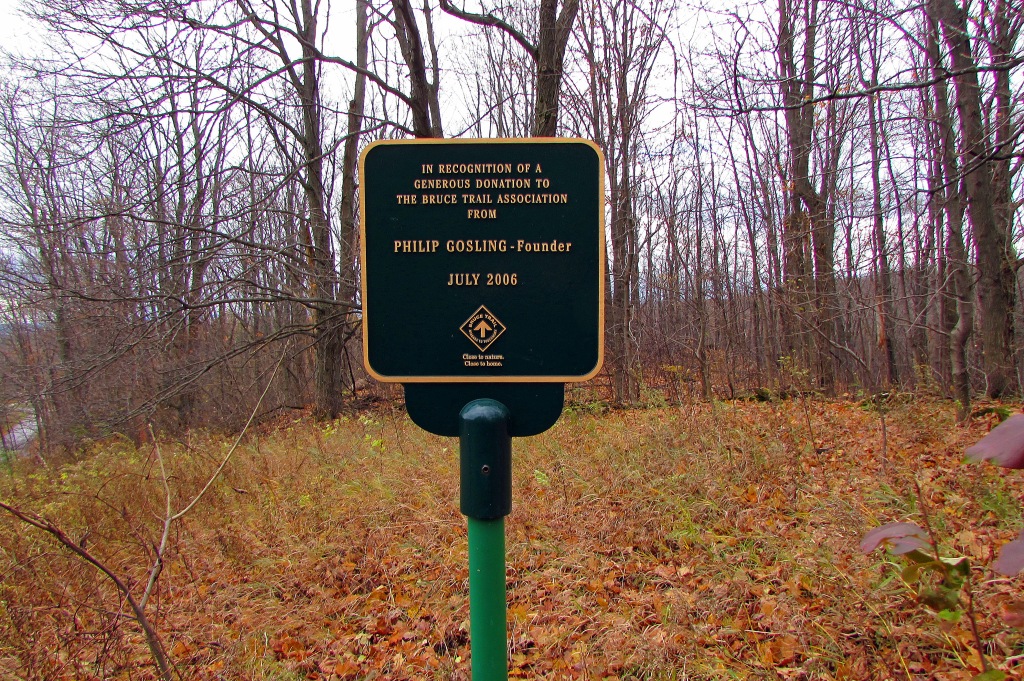 298. Near the end of today’s hike, let’s pay tribute to one of the key founders of the Bruce Trail. Philip Gosling of Guelph was the first Trail Director (May 1962-June 1963). Back then, as the Guelph Mercury put it in 2012, “some people looked at the Niagara Escarpment as just a big pile of gravel to be used to build Toronto.” The official history of the Bruce Trail says this about Gosling: “In less than a year [he] had taken the Bruce Trail from a concept to an association which included thirteen clubs and over one hundred miles of actual trail on the ground …. the Bruce Trail might never have come into existence if Philip Gosling had not volunteered to be the first Trail Director for a year.” See David E. Tyson, Trail to the Bruce (2017), p. 43. And, we might add, much of the Escarpment today might have vanished, having been spread thinly over GTA suburbia. For more information about the redoubtable Mr. G., visit his Foundation’s website.