324. The scene from the top of that hill just beyond where our car was parked in image 323. That’s 1st Line EHS snaking north toward the horizon. Quite a lot of snow has melted off since our last outing a week ago, so we assume, quite wrongly, that hiking conditions will consequently be easier.

325. Not a bad day as far as temperature is concerned: on or just above freezing, with a fair amount of sun. The snow has more or less melted off in more exposed parts of the Trail, but where it has drifted, as against this split-rail fence, it still lies fairly deep. And apparently untrodden. Can we really be the first to walk this section of Trail this year? 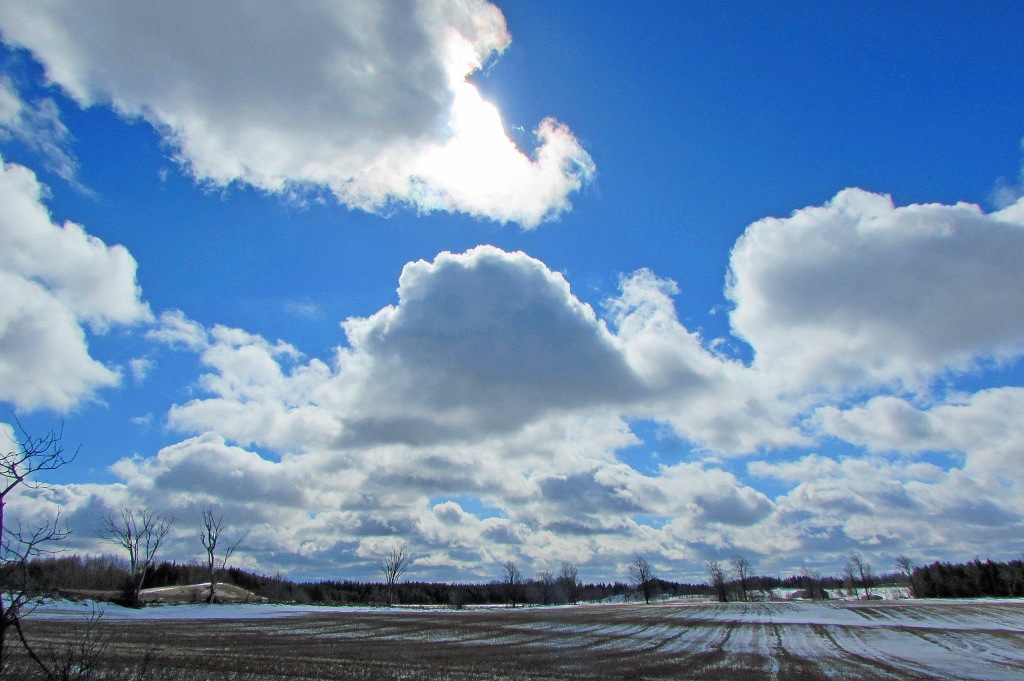 326. “Sunny with patchy cloud” doesn’t do the scene justice. The sky is totally upstaging the land.

327. There’s an application in the works to develop an open pit aggregate mine on 1.6 sq km (410 acres) of land between 3rd and 4th Line EHS south of Highway 89, currently prime farmland zoned rural residential. Though this would not directly affect the current course of the Trail, it will certainly impact the Niagara Escarpment, not to mention the quality of life of the current local residents. And as we have seen in previous episodes of this blog, the interests of the quarrying industry are completely incompatible with the necessity of preserving the ecological integrity of the Escarpment. You can read more about the issues on the excellent Protect Mono website.

328. This farmyard boasts an enormous pile of manure that has melted off the snow with its own heat. 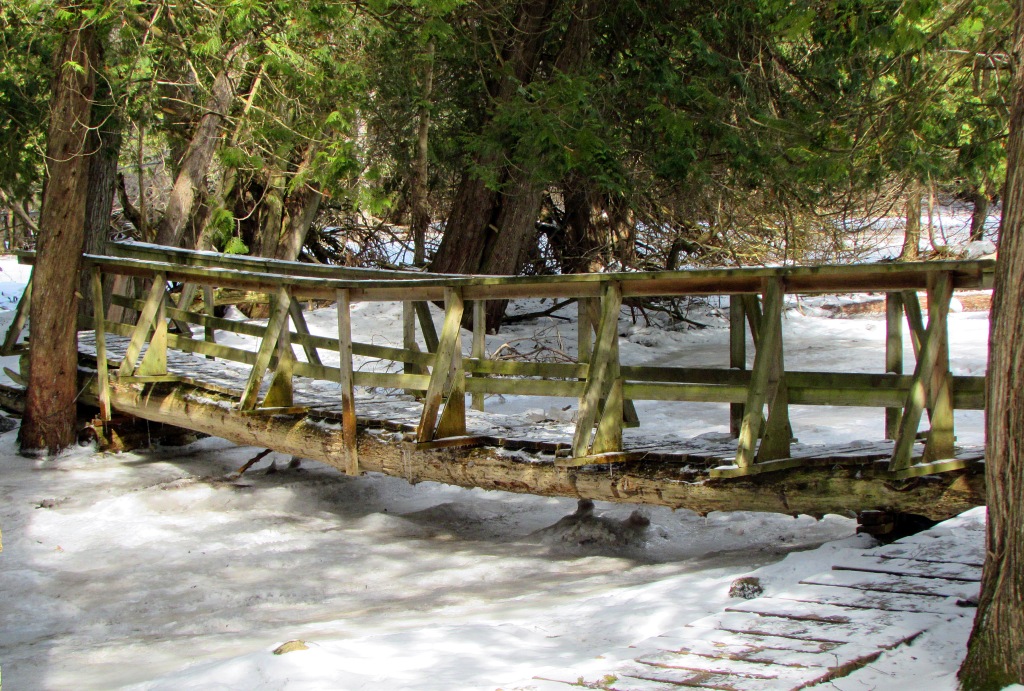 329. Across Highway 89, and we’re in the Boyne Valley Provincial Park. Here a rickety bridge crosses the Boyne River, flowing vigorously under its partly frozen surface. The river is a tributary of the Nottawasaga, and is named after the stream that was the scene of the battle in 1690 that, for good or ill, determined the course of Irish history. Many of the original settlers of Mulmur Township (for this is where we now are, having left Mono) were Ulster Protestants.

330. Murphy’s Pinnacle, a sand and gravel kame (a.k.a. esker) looms at the northern limit of the Park. A kame (the term derives from an old Scots word meaning “comb” or “ridge”) is a usually solitary hillock formed by meltwater from a retreating glacier. Although they look alike, kames should not be confused with drumlins, which are formed by the movement of ice in a glacier and usually appear in groups. However, there seems to be little agreement among geologists about exactly how glaciers fashioned these cute little hills. In my considered opinion, kames were made by kelpies and drumlins by goblins.

331. We now arrive at the most difficult stretch of Trail we have yet encountered. The Trail itself, weaving down a narrow valley with little exposure to the sun, has been totally covered by refrozen runoff. Not even our daggerlike cleats can handle this surface properly, given the smoothness and dampness of the ice and the steepness of the terrain. 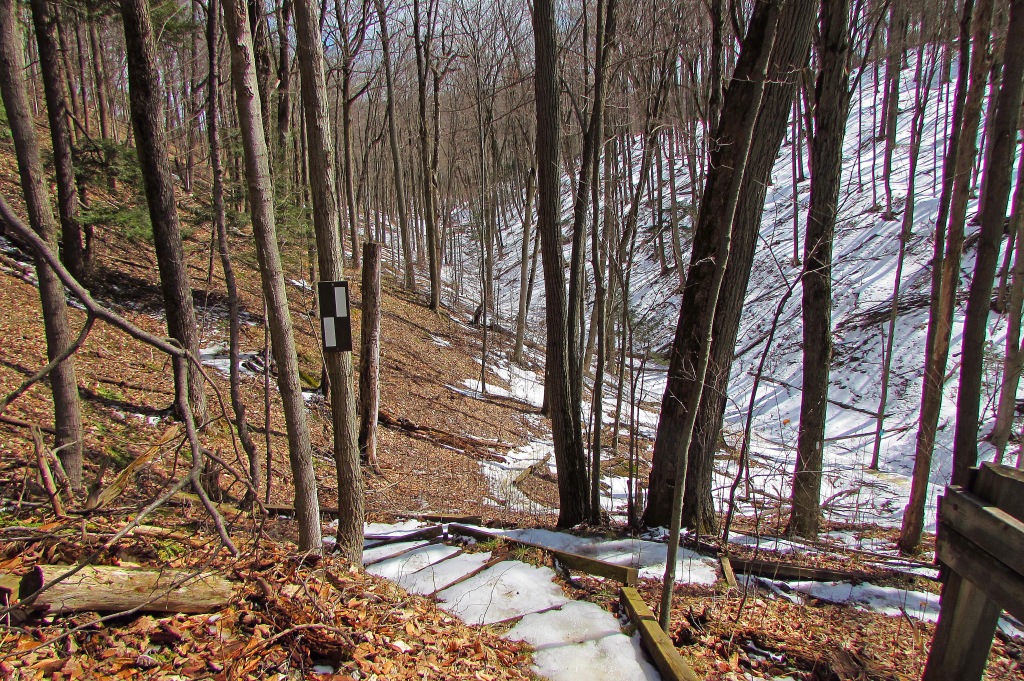 332. In some places there is no room to sidestep the Trail safely, as here going down these ice-covered switchbacked steps. I confess that at certain points on this descent, I resorted to that downhill manoeuvre seasoned Swiss Alpinists call Der Hinternrennrodel, roughly translatable as “the butt luge.”

333. Mulmur Township was named thus in 1821. Remember how little agreement there is about the origin of the name Mono (see 294)? It’s the same with Mulmur. According to Alan Rayburn, some claim Mulmur was named for the only son of the great Shawnee warrior Tecumseh, though as his name was Paukeesaa or Pugeshashenwa, it’s hard to see how that might have come about. Better options might be the ninth-century Irish bard and historian Maolmura or the hill called Maol Mhor on the Scottish island of Islay. The Township’s own historical documents say only that “the name is believed to have been given by the surveyors. Mulmur was thought to be a co-worker of Martin Luther.” But a Google search for that co-worker leads … precisely nowhere.