376. Today’s hike, 16.5 km, is our longest yet … rather longer than expected, if truth be told, as recent reroutes add more than a kilometer to our planned distance. We begin on the Mulmur-Nottawasaga Townline, the road that divides Dufferin County (south, on the left) from Simcoe County (north, on the right). In early July, the landscape is pleasingly bucolic, so let James Thomson (1700-48), master of pastoral poetry, set the scene (from “Summer,” 1727):
“From yonder fields of aether fair disclos’d,
Child of the Sun! illustrious Summer comes
In pride of youth, and felt thro’ Nature’s depth.
He comes, attended by the sultry Hours,
And ever-fanning Breezes, on his way;
While, from his ardent look, the turning Spring
Averts her blushful face; and earth, and skies,
All-smiling, to his hot dominion leaves.”

377. “Pastoral” comes from Latin pastor, a shepherd, and “bucolic” from Greek boukolos, a cowherd, but those are hay bales, not sheep or cattle, in the field. The tractor replaces the traditional ploughman. And sadly, the nymphs seem to have departed. Still, the scene’s a 21st-century version of the rural idyll dreamed of by urban folk ever since the 3rd century BC, when Theocritus of Syracuse started it all off.

378. Though no domestic animals are visible, their feed lies rolled up in the fields. A large round hay bale like this one can weigh up to a ton. These bales have to be positioned and transported carefully, thanks to their massiveness and tendency to roll. Notoriously, in 2010 Mike Edwards, a cellist with the band ELO, was killed when a hay bale weighing 590 kg rolled down a hillside and collided with his truck in Devon, England.

379. A cedar waxwing perches at the roadside near enough to have its photograph taken, but not long enough for a close-up. These birds are easily recognizable from a distance by their black masks and yellow bellies. They get their name from wax-like droplets on their wings and the fact that the small cones of the eastern red cedar make up part of their diet. But in the late summer and fall they love to gorge on berries of many kinds. If the berries have fermented the waxwings become drunk and, in urban areas, have a tendency to fly straight into window panes, stunning or even killing themselves.

380. This is a view of a farm closest to the Townline. The hanging flower basket is a nice touch. 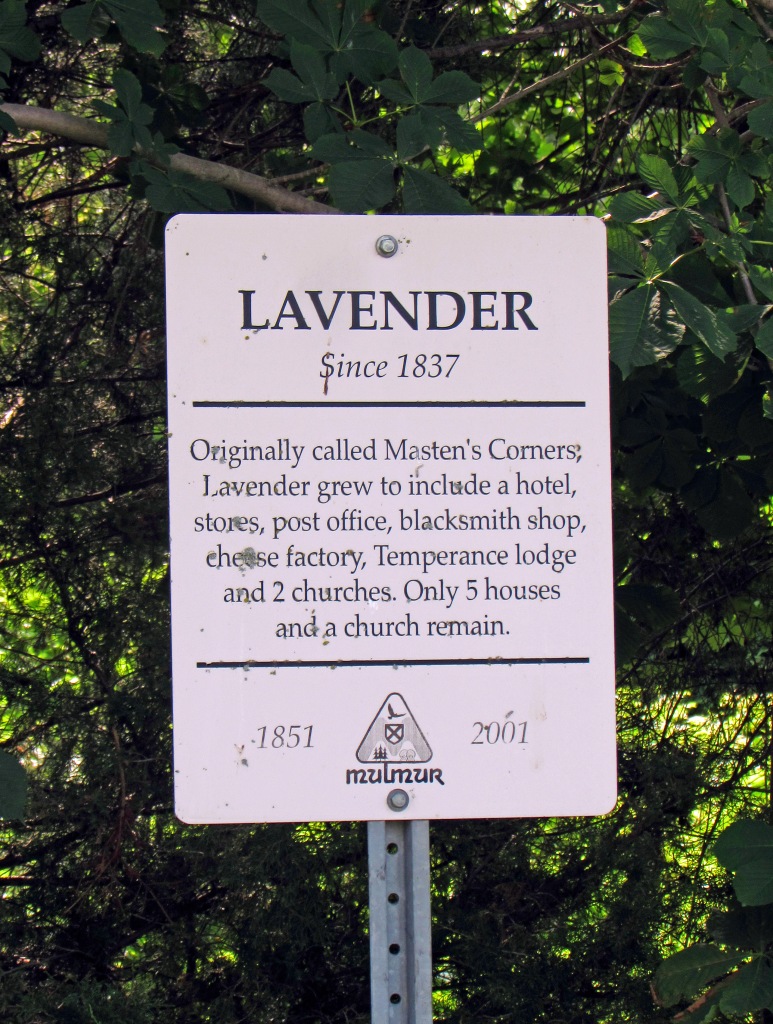 381. What could be a more pastoral, bucolic name than Lavender? This former village, which attained its maximum population of 120 in 1873, lay at the intersection of the Townline with Centre Road/Lavender Hill Road. Its history is known chiefly through its postmasters, of whom there were seven in all. The last earned a salary of $40 p.a. until 1921, when the post office closed. Lavender’s remaining inhabitants had to wait till 1946 to get electricity. Lavender may be not what is was, but it marks a milestone for us: this sign marks the boundary between the Dufferin Hi-Land and Blue Mountains Club Sections of the Bruce Trail. We have now traversed five of the nine Club Sections, completed 379.6 km (or 42%) of the Trail, and have “only” another 519.0 km to go. 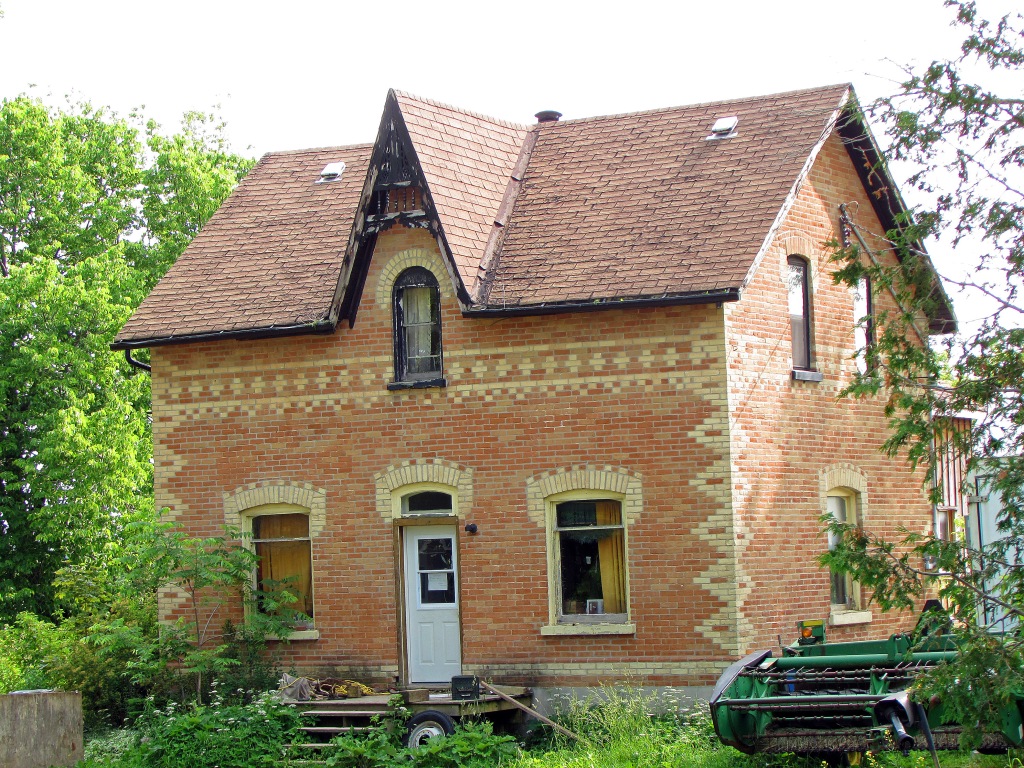 382. Lavender is now a hamlet whose living inhabitants are far outnumbered by those resting in its capacious cemetery. In spite of what the sign says, we can’t see any church. This house with its interesting brickwork will have to represent old Lavender.

383. An eastern tiger swallowtail rests on the path and contemplates a dead leaf. This seems to be a good year for butterflies, at least here in southern Ontario.

384. This property wins the award for the loveliest front garden in Lavender.

385. The Trail runs by the larger of the two artificial ponds in the Noisy River Provincial Nature Reserve …

386. … and this is the Noisy River. It’s a small headwater tributary of the Nottawasaga, very clean and clear, though not especially noisy. Nice to be in a shaded valley on this hot day, as James Thomson goes on to point out:
“Hence, let me haste into the mid-wood shade,
Where scarce a sun-beam wanders thro’ the gloom;
And on the dark-green grass, beside the brink
Of haunted stream that by the roots of oak
Rowls o’er the rocky channel, lie at large,
And sing the glories of the circling year.”

387. Canada anemones (a.k.a. crowfoot or round-leafed thimbleweed) are native perennial members of the buttercup family (and are toxic if ingested). “Anemone” is a difficult word both to spell and pronounce. It comes via French from a Greek word indicating a female offspring of the wind, anemos, so it suggests, rather poetically, that the flower is a “daughter of the wind.” Apparently anemones were once thought to bloom only when the wind blew. 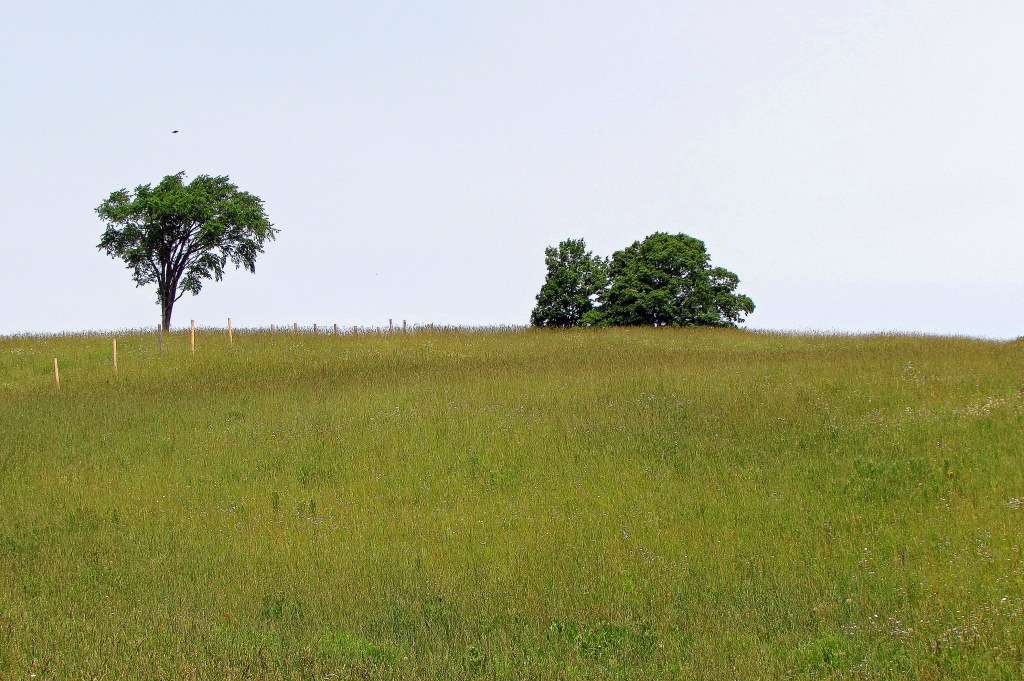 388. There’s something strangely evocative about lonely trees standing against a grassland horizon …

389. … and I wonder, as we approach high summer when the grasses in open fields are tallest, does such a sight stir ancient memories? Humanity could be said to begin with the first quintessentially human adaptation, namely, walking upright. According to recent theory, our ancestors became fully bipedal about four million years ago after they descended from the trees (their original habitat) to wander through the long grasses of the African savannah. They now needed to stand fully upright to see where they were going! However, the universal prevalence of lower back and knee pain as we get older suggests that four million years hasn’t been long enough for us to evolve a skeleton capable of resisting the downward pull of gravity for a whole lifetime.

390. A memorable memorial plaque! To love with a passion and walk with a purpose are not uncommon, especially among Bruce Trailers, but to forgive with a smile is a sign of an exceptionally strong character.

391. What looks like a classic little red schoolhouse stands at the junction between 6/7 Sideroad and Concession 10 South Nottawasaga. On the plaque under the gable on the front, the date 1880 is visible. The building is padlocked and doesn’t look inhabited.

392. This section of Trail is twinned with the 180 km Transcarioca Trail in Brazil, that runs from Barra de Guaratiba to the foot of Sugar Loaf Mountain. Carioca is the demonym of Rio de Janeiro, hence the Trail’s name: it crosses metropolitan Rio via several Brazilian national parks, allowing hikers to view the city from many unexpected angles. Instead of our blazes, the Transcarioca uses painted stencils of the sole of a hiking boot as waymarking. You can visit its website (in Portuguese) here.