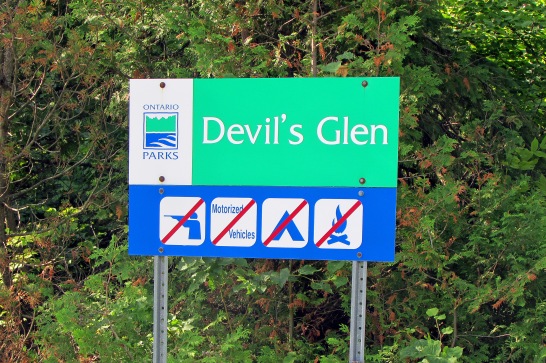 393A & B. This section of the Bruce has a slightly intimidating name. We decide that we will tackle it in the cool of the early morning, which means reversing our usual direction: for the first time we’ll hike from north to south. 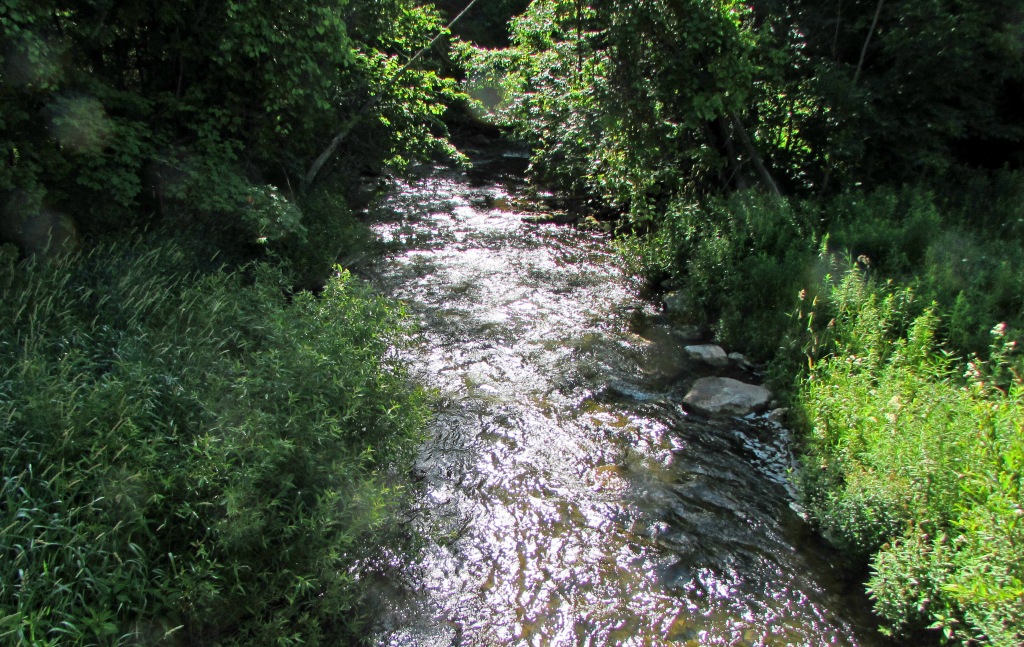 394. The Mad River, a tributary of the Nottawasaga, has carved out Devil’s Glen. According to Alan Rayburn’s Place Names of Ontario it “tumbles with great ferocity down the Niagara Escarpment,” though I have to say it looks perfectly sane at this particular crossing point.

395. We find ourselves at the foot of a ski slope. This one has a vertical drop of 90 m, and, in wintertime, there are five ski lifts to take you to the top. We have to climb it.

396. This confusing clutter of signage greets us as the Bruce begins its climb up the ski hill. The wooden things with four legs are ski racks. The Switch Back Cross-Country Ski Trail is marked with a black diamond, indicating that it’s rated “difficult.” That’s the route the Bruce takes, needless to say. Of course there’s also the usual sign in small print disclaiming liability that we have seen often on the Trail when it shares the way with snowmobilers, BMX bikers, et al.

397. Very rarely in these parts do we encounter fellow hikers on the Trail. So when we meet this family group and their border collie on the top of the ski hill, we stop to chat. 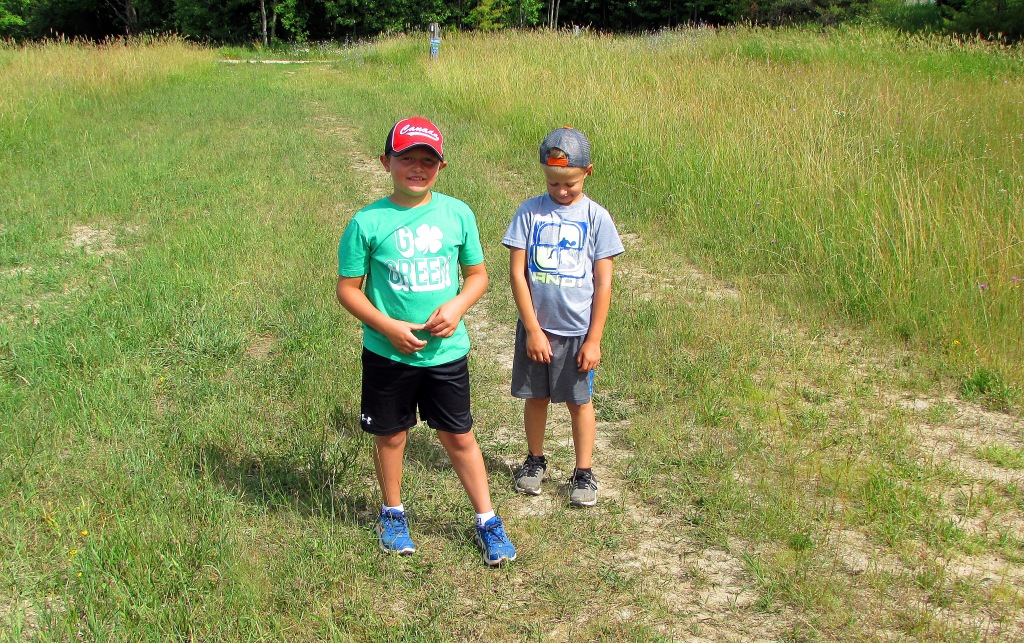 398. Mike notices that the older brother sports a Saskatchewan Roughriders T-shirt. In Regina, where both Mike and I lived for many years, that Canadian Football League team, with its all-green merch, was the major sporting draw in town. When we explain to the boys that we now live in the Hamilton area, they tell us that their name is Hamilton, but they live in Glen Huron, a small village in the vicinity.

399. A little further on, and we come to this Side Trail sign. Well, it turns out those boys we just met were the sixth generation of the Hamilton Brothers of Glen Huron! Cheers to the Hamilton family for their long support of the Bruce Trail.

400. At some point on today’s hike we complete 400 km. Let this close-up of a wheatfield represent this milestone on our progress. Wheat reminds us of Saskatchewan, except the Prairie soil for the most part cannot support crops at anything like this density. 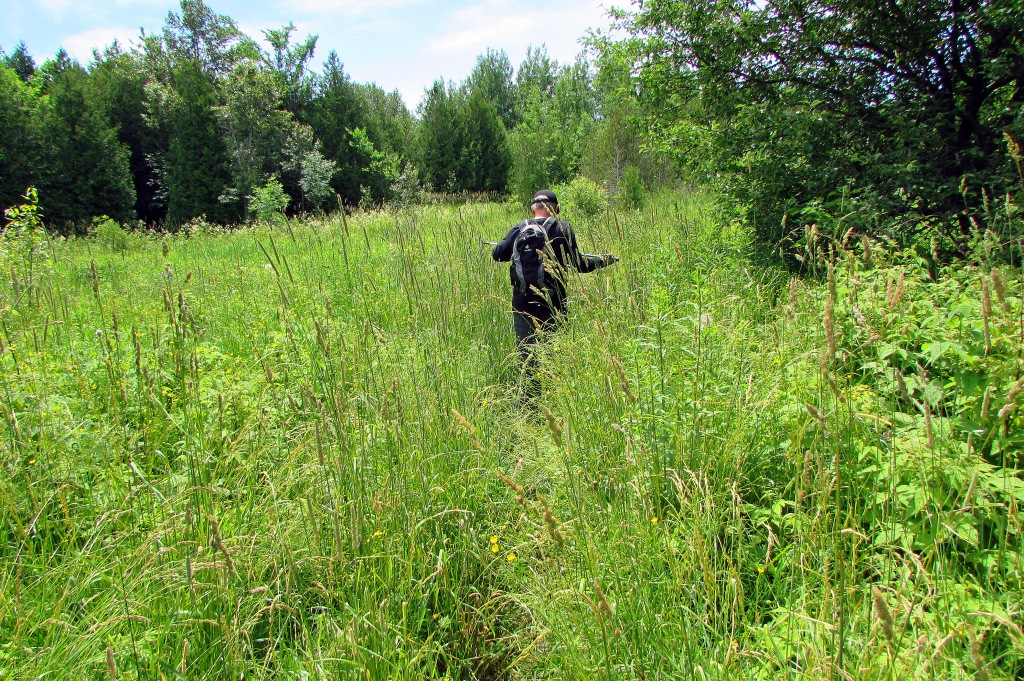 401. We pick our way carefully through this overgrown path. A blaze or two wouldn’t go amiss!

402. This is milkweed in mid-July. Its Latin name, given by Carl Linnaeus himself in 1753, is Asclepias, for Asklepios, the Greek god of medicine. Two of his daughters were Hygieia and Panacea, while his staff, entwined with a serpent, is a symbol of medicine even today. But Linnaeus’s association of milkweed with healing is odd, as the plant is quite toxic to humans! However, milkweed provides essential nutrition for monarch butterfly larvae, and the general awareness raised by the campaign to protect these beautiful migratory insects has meant that rural milkweed is now often left undisturbed where it grows, while in cities it is increasingly cultivated as a garden plant. 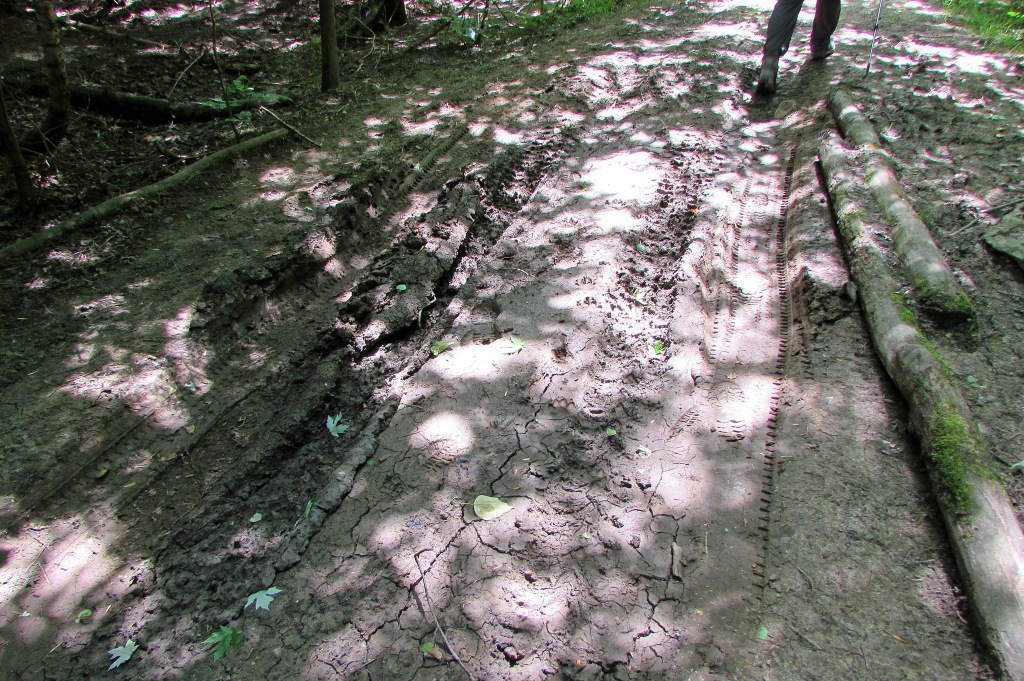 403. This unholy mess on the Trail along the unopened road allowance leading south to 12/13 Side Road was made by one or more ATVs. This is private land, so I doubt that anyone can do much to enforce the Trail’s no-motorized-vehicles policy.

404A. Good gracious, what’s that in the sky? Apollo’s multicoloured chariot? The reflecting metallic side of an alien starship? A sign the Almighty is rethinking his covenant with Noah? 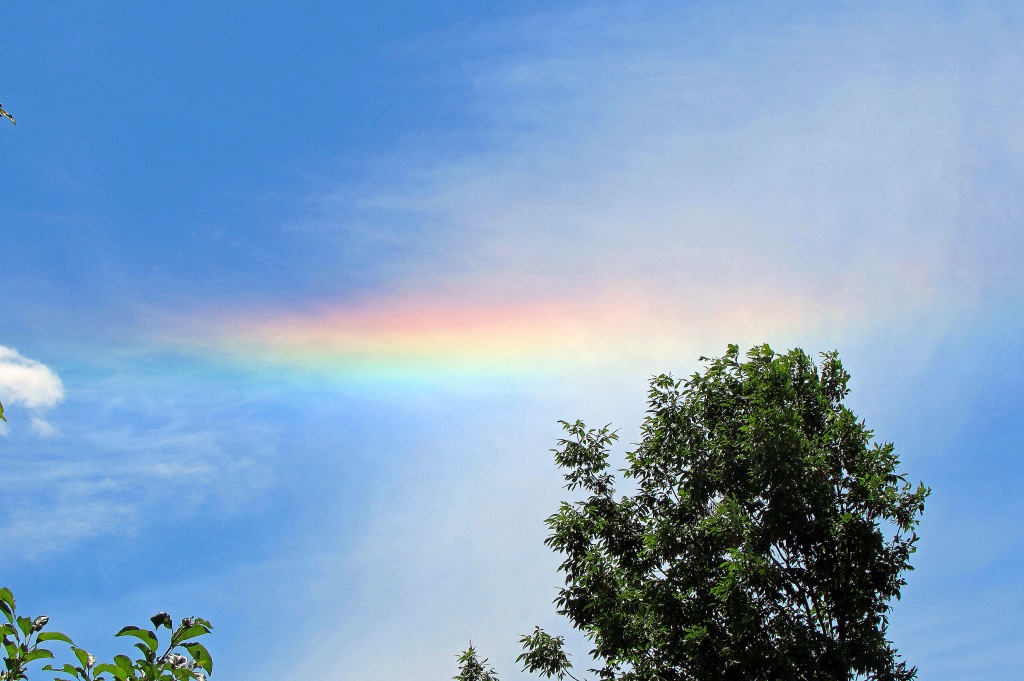 404B. It’s a rainbow, except it’s not raining nor is it a bow. This phenomenon resembles the sundogs you see on very cold sunny days on the Prairies, when sunlight is refracted by ice crystals in the air. But this is a very warm day in July, so it must be what’s known as an iridescent cloud. In other words, there’s a translucent cloud of tiny water droplets up there that is splitting sunlight into prismatic colours. As such it’s a rare, but not unprecedented, sight. Amazing! 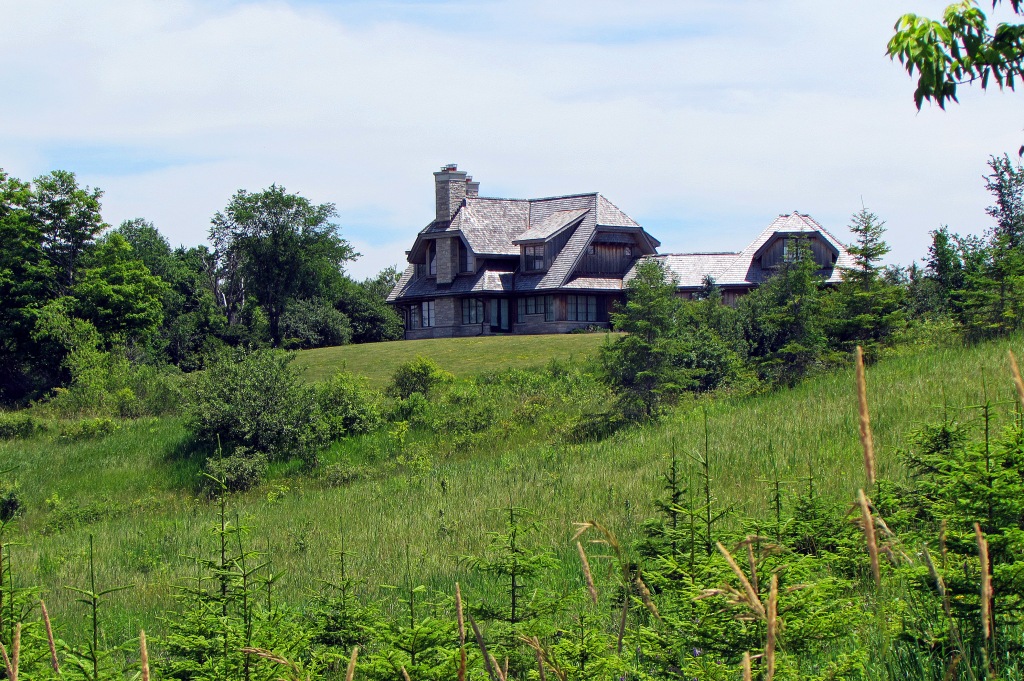 405. For some reason, this house on a bluff overlooking Concession 10 puts me in mind of the lair of a Bond villain. Perhaps it’s the resemblance of the roofline to Darth Vader’s helmet …

406. The Loneliness of the Long Distance Runner.

407. The Blue Mountains Bruce Trail Club was the second to be formed, meeting first on 5 July 1962. The origin of its rather fanciful name is complicated, but begins in 1941. In that year Jozo Weider, a Czech immigrant with dreams of starting a winter sports centre to rival those in Europe, built Blue Mountain Lodge. By 1960 this had developed into Blue Mountain Resort, now the largest ski resort in Ontario, attracting 750,000 skiers a season. The Bruce Trail Club must have wanted to associate itself with this successful enterprise. It doesn’t stop there: “The Blue Mountains” is now the name of a town formed in 2001 and incorporating Thornbury and Collingwood. The name, in other words, has proved very appealing to the winter sports enthusiasts upon which the economy of the area depends. And not just to skiers: the Whitby Formation, i.e., the blue-grey shale that is a geological feature of the area, has now become known as the Blue Mountain Formation. The truth is that there is not a single mountain, blue or otherwise, in the area. However, the highest point in southern Ontario (between 526 and 578 m, depending on whom you ask) is in this region. That’s considerably higher than the 100 m Niagara Escarpment that looms over Hamilton, which residents refer to without irony as the Mountain. 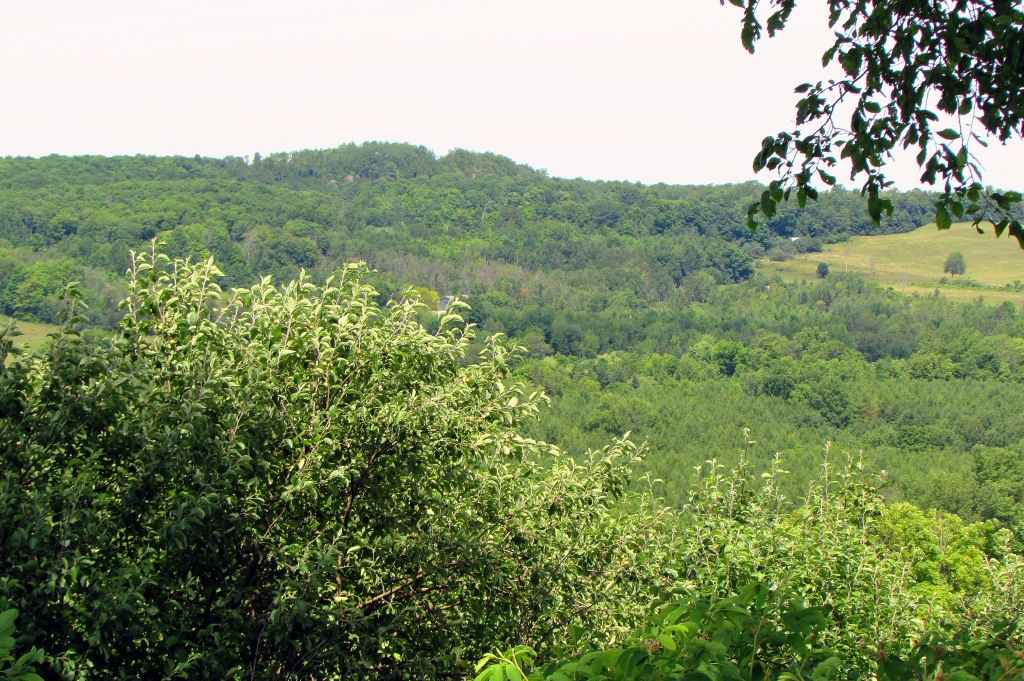 408. However, though the land around here reaches heights greater than anywhere else in southern Ontario, the Niagara Escarpment itself is buried under glacial silt, so you don’t get the dramatic cliff edges that we’ve seen south of here. 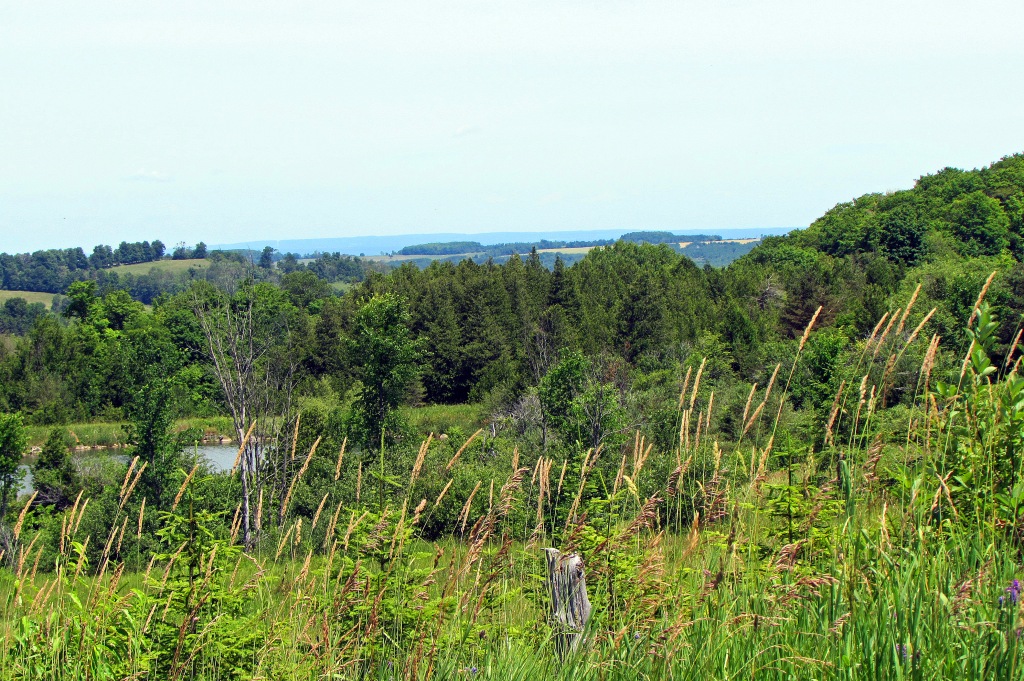 409. Looking over our left shoulders to the north, we see that we have almost reached another milestone. That blue line on the horizon is Nottawasaga Bay, itself the southernmost part of Georgian Bay, that huge eastern lobe of Lake Huron. We are glimpsing the Great Lake on whose shore our trip will eventually terminate. In short, we have made it from Lake Ontario to within sight of Lake Huron, a distance that can just about be discerned on a wall map of the World. And today’s hike is another record: it’s our longest so far, at 17.5 km. As we stagger towards our vehicle, we’re glad that we didn’t leave it till now, the hottest part of the day, to struggle up the Devil’s Glen.