410. A wood lily (Lilium philadelphicum) with a red, rather than the more usual orange, terminal flower, blooms at our starting point in the Devil’s Glen parking lot. This lily’s bulbs are edible by humans and by rodents such as voles, who store them in their burrows. The wood lily is native to eastern North America, and is now found across Canada from Québec to BC.

411. The early morning’s shaping up to be the prelude to a beautiful day. We’re walking along the edge of a wheatfield under a clear blue sky. Enough said. 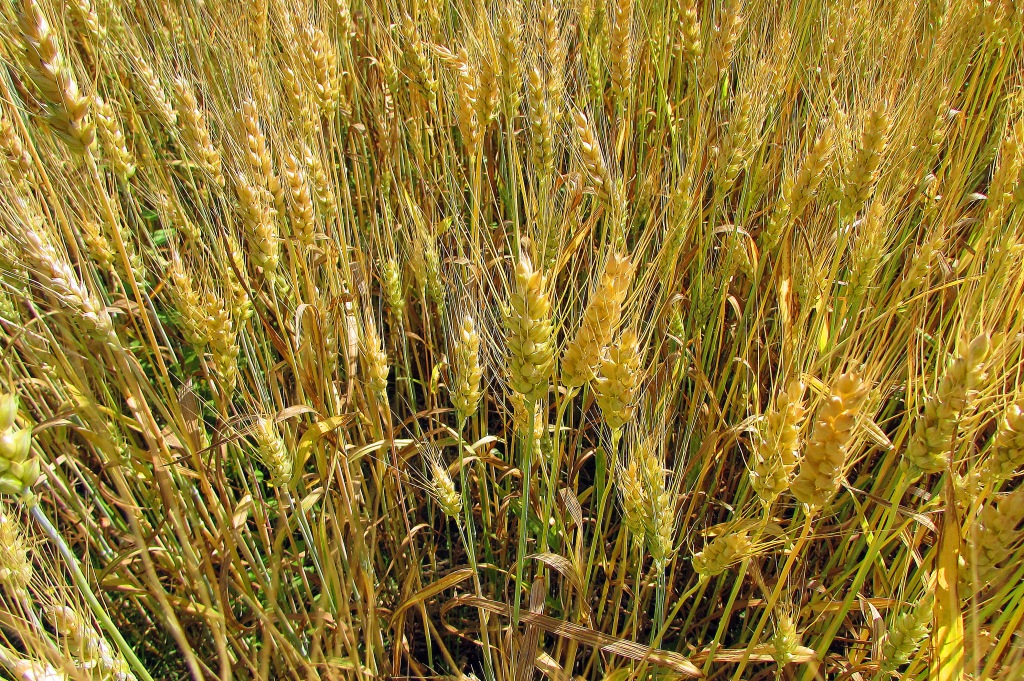 412. Nine days after our last hike, the wheat has ripened considerably (compare image 400 in Part 33). The weather this summer so far has been consistently very warm with plenty of precipitation, making for an excellent growing season.

413. From this elevated viewpoint, Concession 10 North seems to plunge straight into Nottawasaga Bay. This image obviously wants to be a metaphor for something, though I’m not sure what. Life itself, perhaps?

414. That’s Nick, trying to figure out what the scene is a metaphor for.

415. This lovely little stone chapel on the left of Concession 10 just north of the Duntroon Highlands Golf Course has been converted into a dwelling.

416. A little farther up Concession 10 is another interesting conversion. The window boxes indicate that someone’s living on the ground floor of these two old barns intersecting at right angles.

417A & B. This is the lone maple “Wedding Tree” mentioned in the faded sign. No one seems to know how the tree got its name, though presumably someone got married under it at some point. The field has not been cultivated this year and the Trail through the weeds is clear enough.

418. As we walk north up the Blue Mountains-Clearview Townline, we encounter this multiple sign at a crossroads. What does it mean? Well, our road is being crossed at right angles by another road, the west section of which is the Osprey-Blue Mountains Townline, while the east section is the Nottawasaga 30/31 Side Road. In other words, we’re at the point where three different Ontario administrative units meet. Clearview Township in Simcoe County, where we have been following the Trail until now, is on our right. The separate townships of Grey Highlands and The Blue Mountains in Grey County are divided by the road on the left. Henceforth the Trail will be spending a long time winding through Grey County, whose seat is Owen Sound. The county is named for Charles, second Earl Grey, British Whig prime minister from 1830-34. The double distinction of Grey’s administration was to ensure the passage of both the Great Reform Act of 1832 that expanded the franchise and the Act of 1833 that abolished slavery in the British Empire. Earl Grey tea is named after Charles, though there’s no evidence that he liked his cuppa flavoured with bergamot. 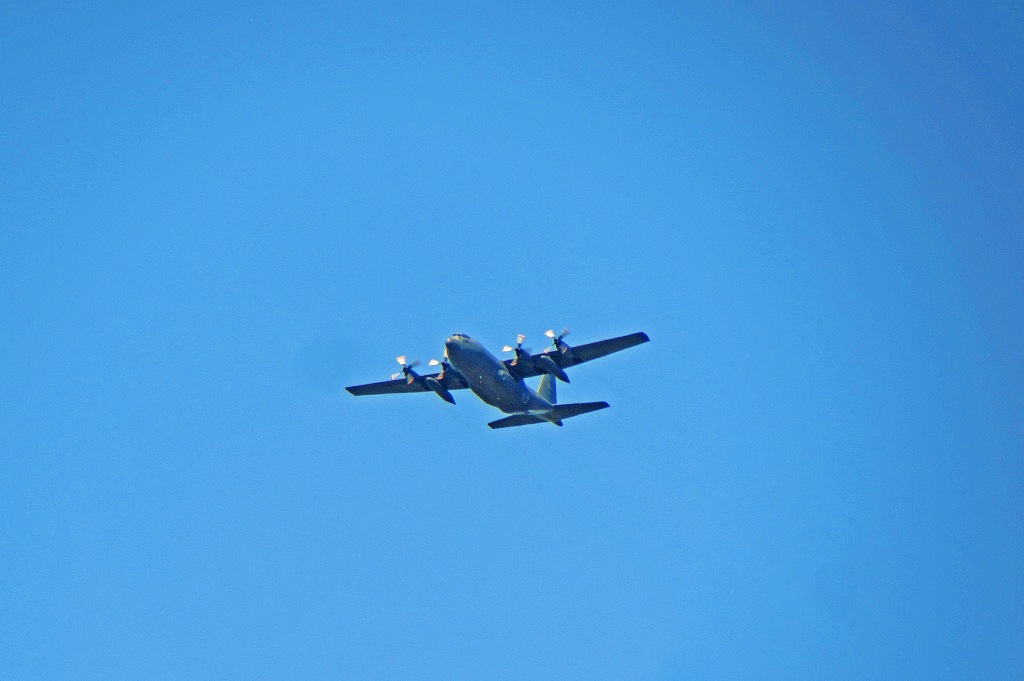 419. A Lockheed CC-130 Hercules four-engined fixed wing turboprop plane of the Canadian Armed Forces flies overhead. It’s primarily a troop transporter, and if this is one of the newer CC-130J “Hercs,” then it can carry 92 combat paratroopers and is based at 8 Wing in Trenton, Ontario.

420. Creeping harebell or bellflower (Campanula rapunculoides) is described as a “very persistent weed” originally imported from Europe as a garden flower. In the Old World it was cultivated for culinary purposes: its leaves, shoots and roots are edible. It is this flower (known in England as rampion), or a close relative, that gave its name to one of the best-known fairy tales. Rapunzel is the German word for the plant that the husband stole from a witch’s garden to satisfy his pregnant wife’s craving in the Grimm version of the tale. Rapunzel is also the name of the girl subsequently born to the couple but brought up by the witch. In the folk tradition, this tale counselled mothers to offer sex advice to their daughters at puberty rather than lock them up in the false belief that imprisonment would guard against unwanted pregnancy. The prince, you’ll remember, gains access to the beautiful Rapunzel in the tower with the help of her hair. The consequences are predictable.

421. The view north along the Blue Mountains-Clearview Townline. That peak on the left is near the highest point on the entire Bruce Trail system, namely 540 m (1,772 ft) on the John Haigh Side Trail.

422. The Trail then turns left and goes through a gothic forest full of creepers attached to cedars.

423. Through this shady valley runs the Pretty River. It is pretty, too: it’s really delightful to walk by its bank on this hot day. According to the Blue Mountain Watershed Trust, “The Pretty River and its tributaries have an abundance of gravel beds and large deep pools which provide habitat and spawning grounds for Rainbow Trout, Chinook Salmon, Speckled Trout and Brown Trout, among other species.” The Pretty drains into Nottawasaga Bay east of Collingwood. But as with many other watercourses near the Escarpment, the purity of the Pretty River is currently threatened by the pressure to expand the local quarrying industry.

424. Near the Trail by the Pretty River, the home-made grave of a short-lived pet named Rufus.