449. We have just arrived at another milestone. As this blog has one entry per kilometer hiked, and as the latest, 29th edition of the Bruce Trail Reference Guide says the Trail is 898 km long, and as this is entry #449, we are now halfway to our goal! However, the situation isn’t really that clear cut. The 29th edition was published in 2017. The Bruce Trail Conservancy website says the Trail is currently 900 km long. And we are well aware that the length of the Trail has changed continually as we have been hiking it, thanks to reroutes, temporary and permanent. To find an anchor in this indeterminate world where, as Karl Marx said, all that is solid melts into air, we decided at the start that the 898 km Trail as described in edition 29 of the Reference Guide would be the one we would hike. And km 449 is the halfway point on it. So, break out the half-bottle of champagne!

450. I should clarify further. We have completed half the distance of our end-to-end hike, but the Trail’s actual halfway point, as far as it can ever be determined, is some distance behind us. That’s because we have not yet tackled the Trail from Pretty River (km 45.3 in the Blue Mountains Section) to 6th Line (km 13.6 in the Beaver Valley Section), a total of 34.2 km that we must make up in the future.

451. I should also have noted that we are passing through the striking McCluskey’s Rock section of Trail. It’s an overcast day, and it’s been raining during most of the first half of the hike. The first real hints of fall are evident in the foliage. 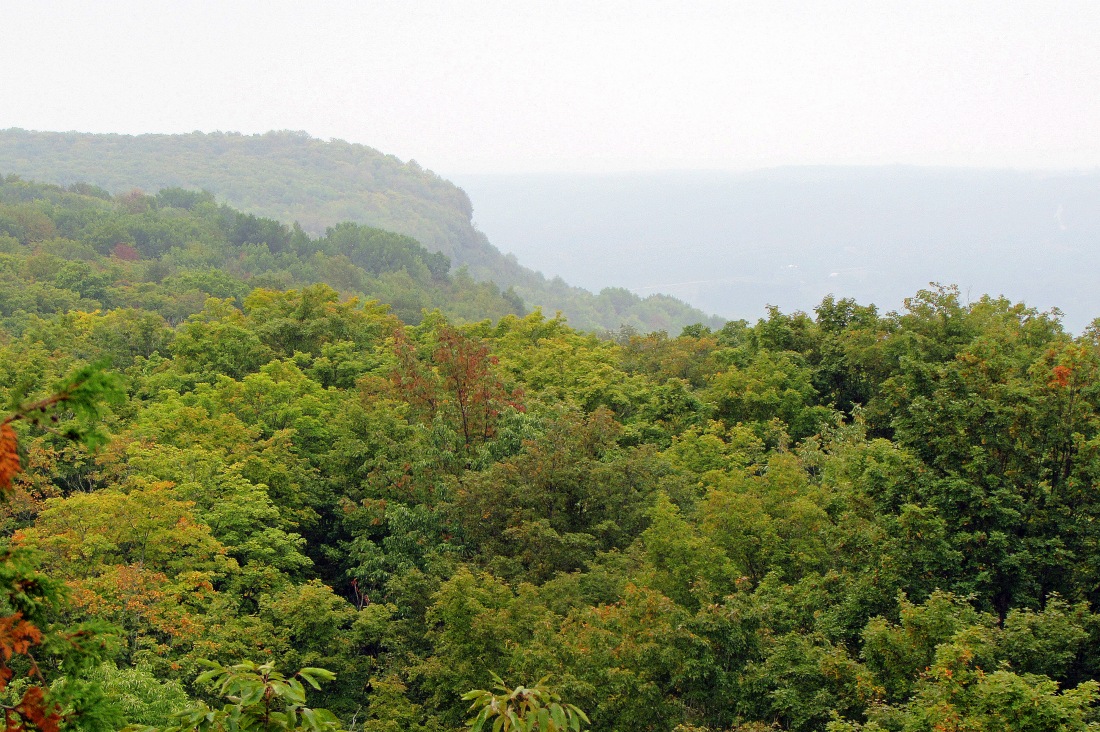 452. Now we are looking toward the Beaver Valley and the peak known as Old Baldy, but the cloud is so low that we never get to see the bald spot. Still, the misty panorama is magical.

453. As we come out onto Sideroad 7B, a McMansion, with sweeping lawn and four-car garage, lies at the foot of Old Baldy, whose top is covered with cloud. A recent reroute of the Trail sends us on a long detour down hard shoulders and sidewalks. Is this yet another case of the wealthy suburbanite who is allergic to hikers anywhere near his property, feeling he is entitled to monopolize places of beauty that have formerly been accessible to all? The reroute adds approximately 2.3 km to today’s hike and to the Trail itself (but not, for reasons explained in #449 above, to our accumulated mileage) and involves scaling most of the 150 m height of Old Baldy from Grey Road 13. 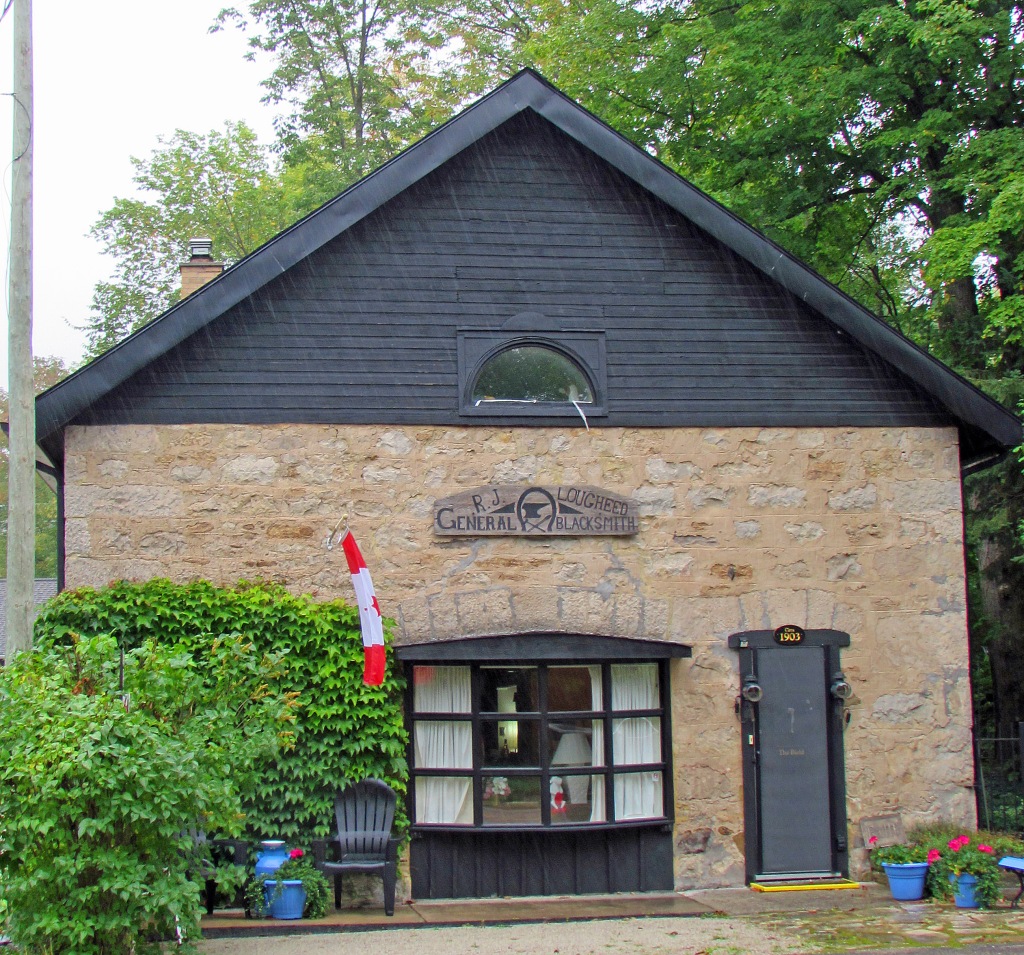 454. The rerouted Trail takes us through Kimberley. This hamlet is named for John Wodehouse, 1st Earl of Kimberley (1826-1902), a prominent late 19th-century Liberal British politician. He was secretary of state for the colonies in 1871 when British Columbia became a Canadian province. There are several places named after Kimberley in the former British Empire, most notably the city in South Africa containing the famous diamond mine. It is raining heavily as we trudge through Kimberley, past several historic buildings including the stone cottage (1903) of the blacksmith …

455. … and the grist mill of 1877, the third on this site, constructed by John and William Plewes, brothers who had a sideline as beekeepers.

456. Just as we are leaving Kimberley, we pass this row of sunflowers, hanging their heads miserably in the rain.

457. After scaling Old Baldy via a very steep ascent from Grey Road 13, we find ourselves on a level but narrow gravel No Exit road (4th Line) through beautiful early autumnal foliage. And it has stopped raining! The driver of this oncoming car is on a road to nowhere. After squeezing past us in one direction, he squeezed past us in the other five minutes later …

458 … and soon we find ourselves on a Townline road with a euphonious name. Alan Rayburn notes that Artemesia Township was named by Lieutenant Governor Sir Peregrine Maitland in 1822 after a genus of plants including mugwort, while Euphrasia Township was named by Maitland in 1823 after the Latin name for the flower called eyebright. I prefer alternative derivations. Artemesia should surely commemorate the two Artemesias of Caria, formidable female rulers of an ancient Greek colony in Asia Minor. Artemesia I (fl. 480 BC) commanded a fleet of 70 ships, while Artemesia II (d. 350 BC) was a renowned naval strategist. And let Euphrasia memorialize Saint Euphrasia of Constantinople (380-410 AD), an early nun known for piety and her ability to carry heavy rocks about all day long. She would have been an excellent recruit to any Bruce Trail Maintenance Crew. 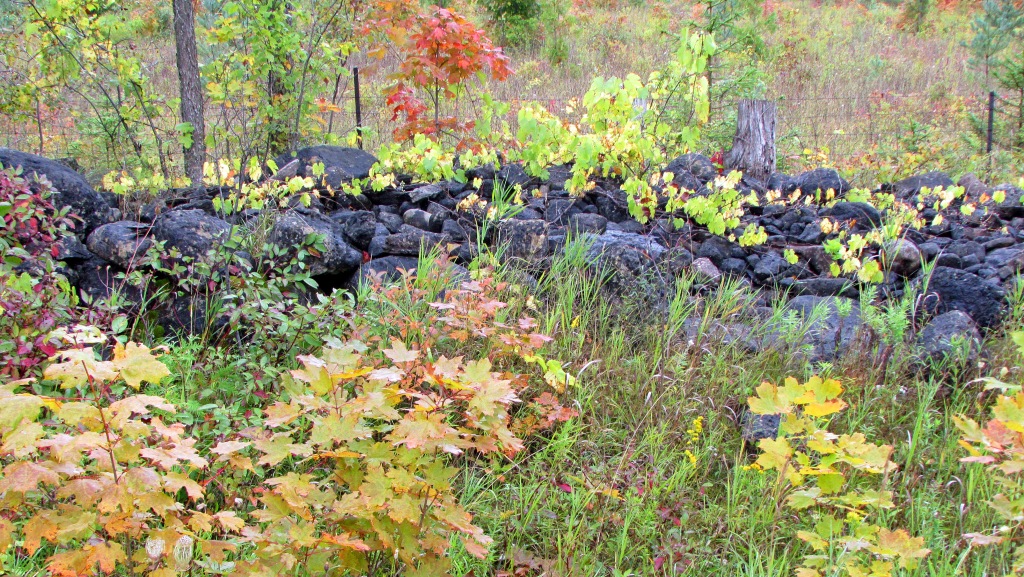 459. Along this section of the Artemesia-Euphrasia Townline, there are the remains of a dry stone wall, with saplings growing photogenically out of its crevices.

460. And here’s a more extreme example of the power of the vegetable world: this mature cedar has somehow rooted itself in a tiny crevice in the natural dolostone wall of the Escarpment.

461. Looking at this quilt-like design on the side of an old barn, Mike notes that he read that such symbols were used to indicate safe houses to slaves escaped from the southern USA via the Underground Railroad. However, research suggests that the Secret Quilt Code used to assist escaped slaves is a myth, deriving from a book published as recently as 1999 and making claims totally unsubstantiated by historians. 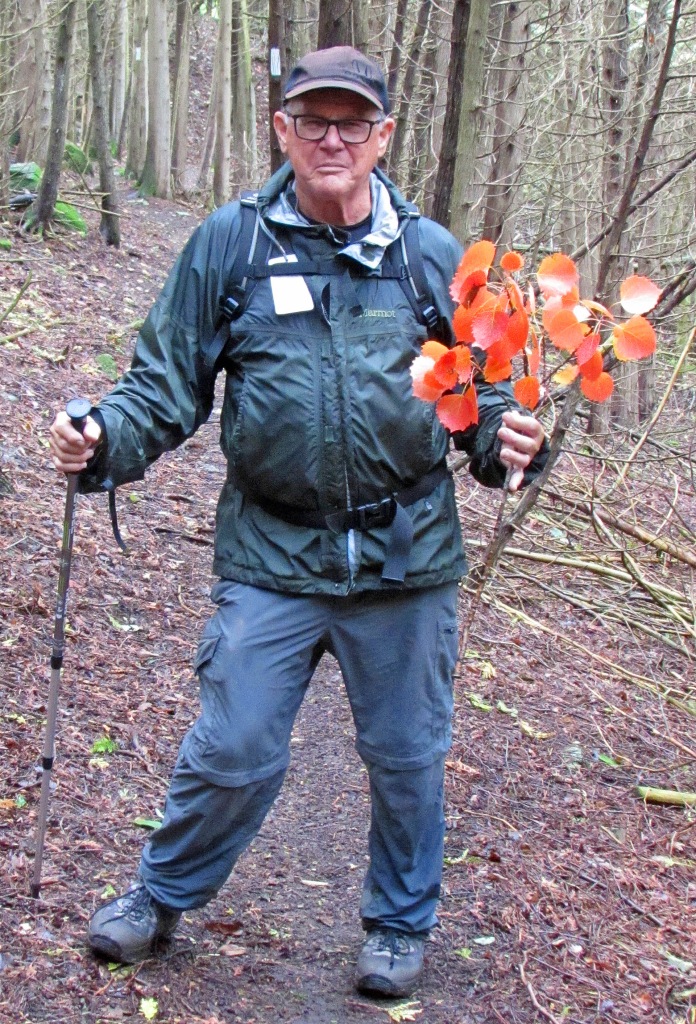 462. Mike holds a branch of an aspen whose autumnal leaves positively glow in the gloomy forest north of Campbell’s Hill.

463. Emerging from the forest, we find our way blocked by two giant pipes descending the Escarpment into Beaver Valley. They are Ontario Power Generation’s twin penstocks, that is, pipes delivering water to a generating station down below. This is, in short, a historic hydroelectric plant dating from 1915. Water is impelled by gravity from nearby Lake Eugenia down the Escarpment via the 1,600-metre steel penstocks. (Originally they were made of wood.) Two surge towers stand at the edge of the Escarpment to equalize the pressure on the pipelines. A century ago the electricity generated by this plant was enough to power Collingwood and Owen Sound. The facility was upgraded in 1988 and continues to produce 6.3 MW of power today.

Go to Part 38: Campbell’s Hill to East Back Line