Start: 4th Line at Intercept Side Trail, near Loree 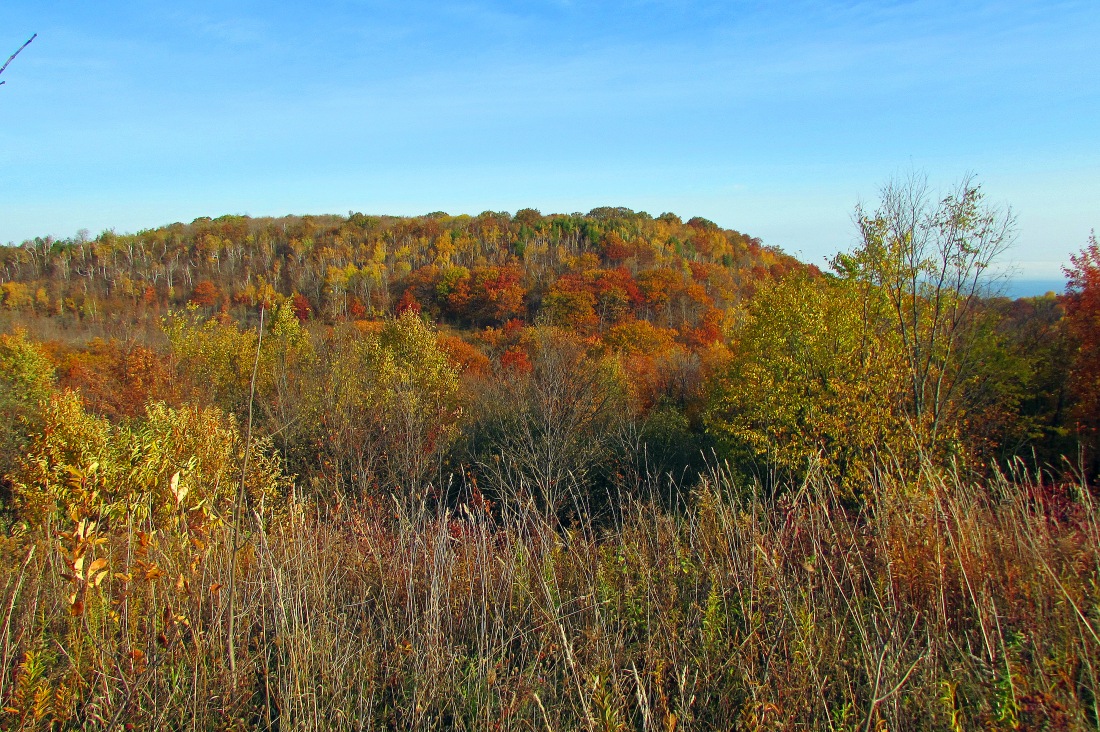 509. This is the last of the three hikes in which we cover the “Blue Mountain Gap” that we omitted after Hike #35. It’s another beautiful day, much milder than the same time last year by when we had experienced near freezing temperatures, sleet, and flurries. The fall colours are delightful here at the start of the hike as we look northeast toward Nottawasaga Bay. 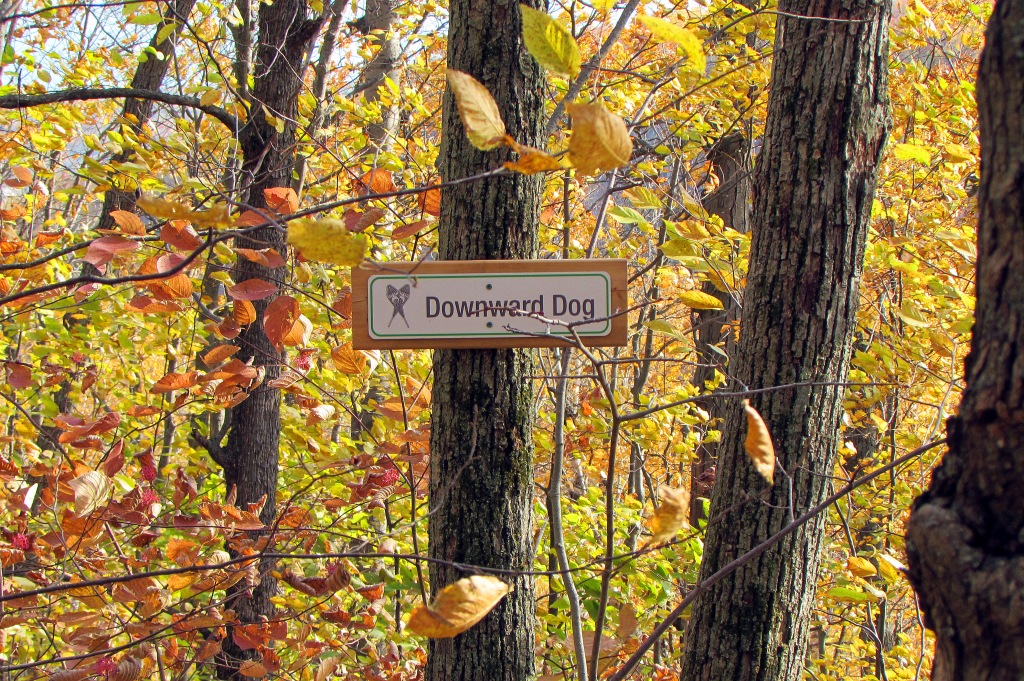 510. We hike through the Alpine Ski Resort, a private club founded in 1957. If you’d like to become a voting member of this club, take a deep breath: that currently costs $25,675 plus taxes and annual fees. “Downward Dog,” which connects with the Bruce Trail, is a steep snowshoe trail in this resort. It’s also a yoga pose: head down, feet slightly apart, hips raised high, and weight on the hands, supposedly reflecting a dog stretching as it gets to its feet. Of course, dogs don’t wear snowshoes, or do yoga … if they need winter exercise, they take their owners out for a roll in the snow, and if they require enlightenment, they do doga. 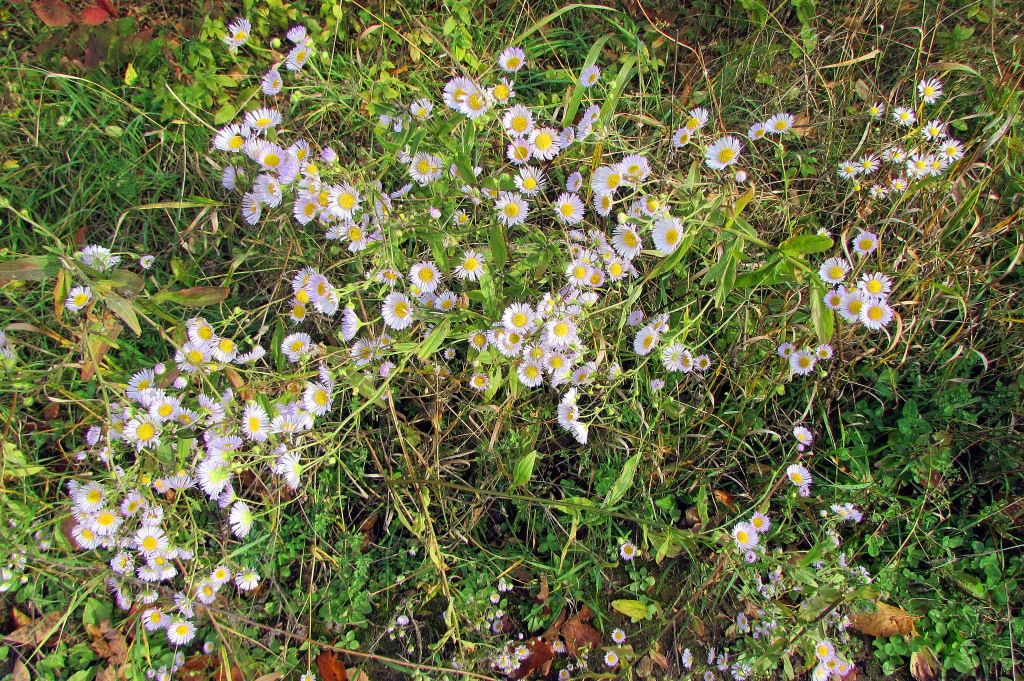 511. There aren’t many other wildflowers still blooming in late October when asters come into their own.

512. This is as close to Georgian Bay as the Trail gets until, near Wiarton, it starts to hug the eastern shore of the Bruce Peninsula. We are at the viewpoint on the Len Gertler Memorial Loree Forest, and only about 1 km from the lakeshore. A plaque here in honour of Len Gertler (1923-2005) recalls that he was a pioneer of urban and environmental planning whose 1967 study of the Niagara Escarpment helped pave the way for its designation by UNESCO as a World Biosphere Reserve. 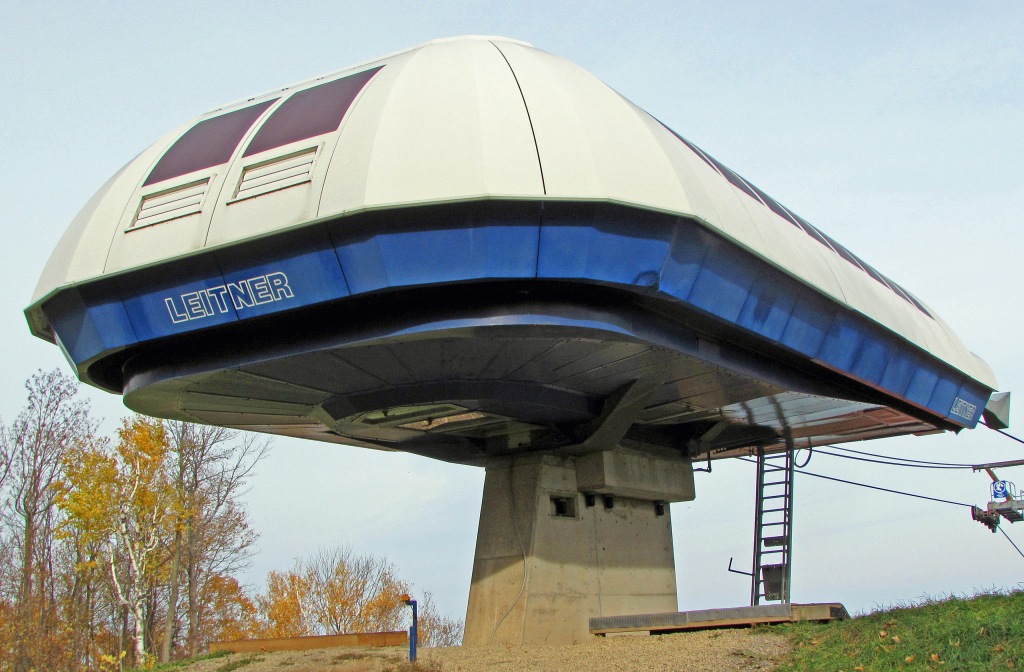 513. Have alien overlords conquered the Bruce Trail? No, it’s just the top of a chairlift in a ski resort that the Trail passes through. The Georgian Peaks Ski Club, founded in 1960, is the highest in the area. And the cost of membership is pretty steep too: $35,000 plus tax. For that and the monthly fee, you can enjoy not only alpine skiing, but also healthy hikes and snowshoeing along the Bruce Trail. Or you could save the cash and hike or snowshoe the Trail for free.

514. The elephant-grey trunks and delicate foliage of young maple woods on top of the Escarpment. Only the slight yellow tint of the leaves reveals that this is fall, not spring.

515. Grey County produces more apples than any other county in Ontario. Popular locally-grown varieties include Macintosh, Ida Red, Spy, Gala, and Honeycrisp. The Blue Mountains in particular is ideal apple-growing territory. The proximity of the Escarpment to Georgian Bay generates a perfect microclimate. The cool water of the Bay delays blossoms until the risk of late frost has passed. Then the waters are warmed over the summer and cool slowly in fall, allowing a long harvesting period. But apple producers in British Columbia, Nova Scotia, Washington State and New York State have been better at adapting to changing markets, and the local apple industry is in decline. Everywhere there are abandoned orchards with delicious-looking fruit still hanging from the boughs.

516. Psychologists have deep thoughts about autumn leaves: “Besides being lovely to look at, [they] evoke associations with past experiences, including events that recurred year after year in childhood. For many people, the associations are positive: reconnecting with friends at school, sipping hot apple cider, going trick-or-treating, jumping in a pile of freshly raked leaves…. Of course, fall can also carry negative connotations. If you hated school or lost a loved one in October, your response to the season might be quite different. But regardless of the emotional valence of your reaction, the principle remains the same: The change of season may bring up strong feelings rooted in past experiences.” – from Linda Wasmer Andrews, “How Autumn Leaves Color Our Inner Lives,” Psychology Today (29 September 2015). 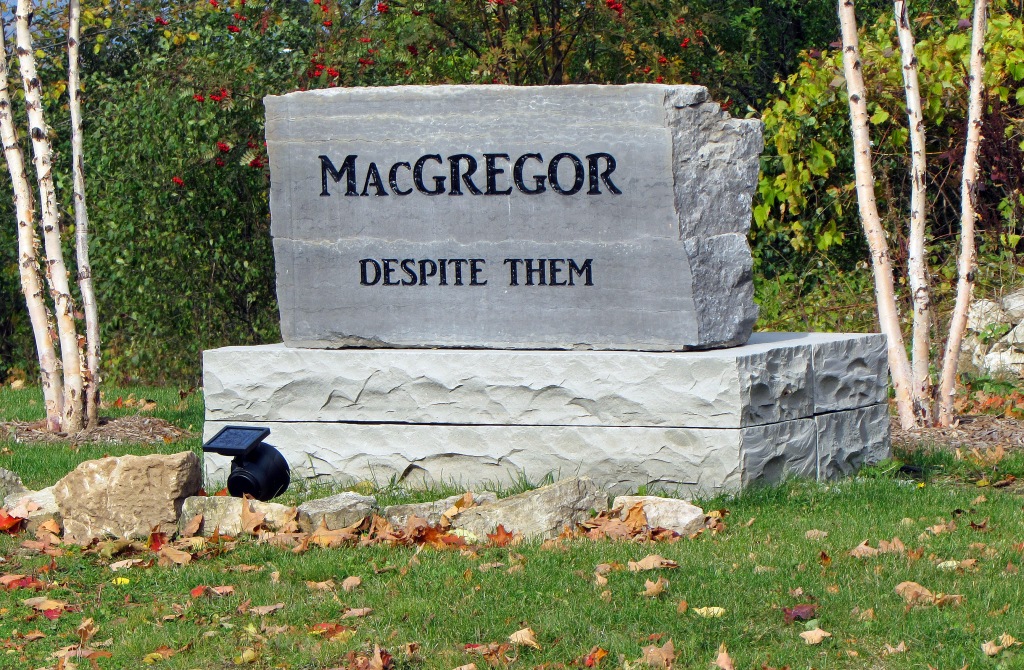 517 & 518. The gateway to this house flaunts this stone with its enigmatic inscription. To understand it let’s recall a Scottish legend based on historical facts almost as hard to pin down as they are with Robin Hood. What is true is that in 1603 the Clan MacGregor’s name was proscribed on pain of death. That is to say, MacGregors were not allowed to use their surname, probably as a result of losing a bloody struggle with other, more powerful clans. Clan MacGregor’s most famous member was Robert Roy MacGregor (1671-1734), a cattle rustler and outlaw who came to prominence during the failed Jacobite Rising of 1689 in support of the deposed Stuart King James II. Rob Roy later waged a protracted guerilla war against James Graham, Duke of Montrose, the most powerful landowner in the Scottish Lowlands. A folk hero in his own lifetime for defying authority, the elusive Rob Roy was eventually captured, but given a royal pardon just before being deported. He died peacefully, and on his grave at Balquhidder a headstone inscribed MACGREGOR DESPITE THEM was added in 1981. Rob Roy’s fame was spread internationally by the publication of Sir Walter Scott’s romanticized account of his life in the novel Rob Roy (1817) and several Hollywood movies. DESPITE THEM would seem to be an ancient motto that Clan MacGregor chose in defiance of its many enemies. But actually it’s a quotation from a rather ungrammatical poem by the myth-making Walter Scott:
“While there’s leaves in the forest, and foam on the river,
MacGregor, despite them, shall flourish forever!” (“MacGregor’s Gathering,” 1816).
Many settlements in this area were founded when Walter Scott’s fame was at its height. There is even a hamlet called Rob Roy at the junction of Pretty River Road and Grey Road 31. And there’s a branch of Clan McMansion right here!

519. As we approach the end of today’s hike down 18th Sideroad, it’s time for something elegiac:

dead and the gold
year
a formal spasm
in the

take
shimmering wind
these fragile splendors from
us crumple them hide

lead us
into the
serious
steep

520. A small cute “flowerpot” created, according to the Bruce Trail Guide, by the waves on an ancient glacial lake, high up on the side of a ravine between 5th and 6th Line. This anticipates the similarly-shaped but much larger geological formations to be found on the east coast of the Bruce Peninsula.