521. We continue to head north up the west side of the Beaver Valley. We’re actually only a short hop across the Beaver River from where we were on Hike #37, heading in the opposite direction. Then the top of Old Baldy was covered in cloud, but today the weather is beautiful for late October and there’s a great view of Baldy from a viewpoint near Bowles Hill. Those weird-looking steel poles in the foreground …

522 … are snow lances, a kind of artificial snow-making equipment. We’re on a recent reroute of the Trail down through the centre of Beaver Valley Ski Club. Membership in this Club, which boasts 6 chairlifts and 20 runs, will cost you a relatively modest $18,000 (plus annual dues and fees). The Club is gearing up for the new season that starts in December as we pass by this neat fence of old skis enclosing one of their properties. 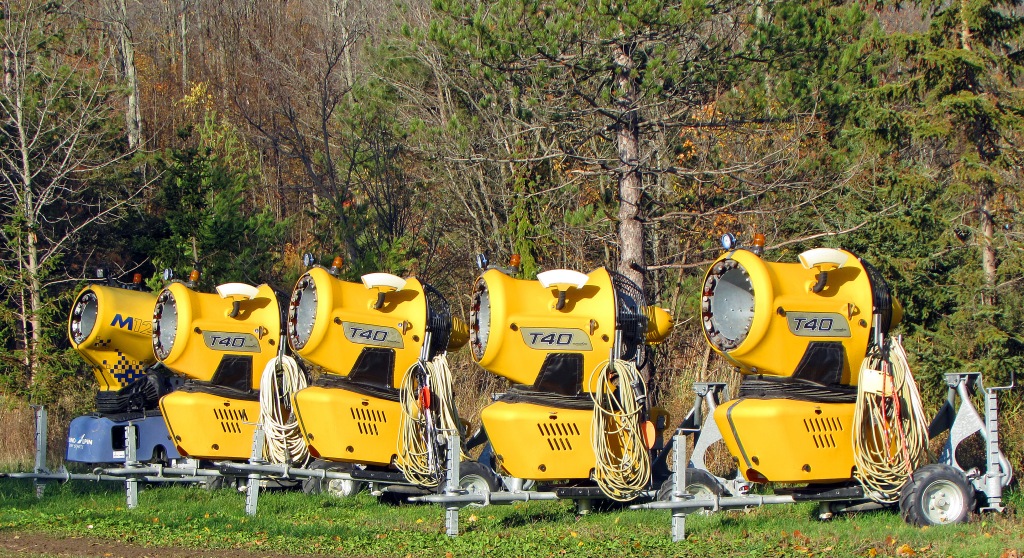 523. So why is membership in ski clubs so expensive? Here’s a clue: a serried rank of snow-making machines await the start of the season. Most are TechnoAlpin T40 compact fan guns made in Italy: each is 2.45 m tall, weighs 600 kg, and costs around US $30,000. Compressed air and water are sprayed out of nozzles and a large fan blows the mixture as a snowy mist over the ground. Artificial snow-making is costly: not so much the air and water, but the energy needed to pump the mixture to the guns and lances, the labour to install and move the equipment, and the electricity to drive the fans. But ski resorts in southern Ontario, like almost everywhere else in North America, are increasingly dependent on snow-making machinery to combat the effects of global warming. The Government of Canada reports that “The number of days per season with snow cover has decreased by 5% to 10% per decade … and during most seasons from 1981 to 2015. These decreases are due to later snow cover onset in the fall and earlier snow melt in the spring as a result of warming trends. … This warming is projected to continue, with decreasing snow cover duration across all of Canada in fall and spring. Snow water equivalent decreased by 5% to 10% across much of Canada from 1981 to 2015. … Significant reductions in snow water equivalent are projected across southern Canada in the future, with decreases of 5% to 10% per decade by 2050.” To stay in business, the southern Ontario ski industry will have to invest in ever more cost-efficient means of making artificial snow, as it won’t be able to rely on Mother Nature to produce the white stuff on cue.

524. The Bruce Trail follows Veronica’s Run, named for Veronica Brenner, a freestyle skier who is a member of this Club. She won a silver medal in aerials at the 2002 Winter Olympics at Salt Lake City. This is the view of the Beaver Valley from the top of the Run.

525. This is Kimberley Springs Nature Reserve, a beautiful spot acquired by the Bruce Trail Conservancy in 2013. It’s classic karst territory, where water has carved underground passages in the limestone cap of the Escarpment. The water, as it flows towards the edge of the Escarpment, is blocked by a glacial moraine. It disappears into sinkholes, then suddenly reappears as Bill’s Creek just a little upstream of this photo.

526. An abandoned farm building near where the Trail crosses Sideroad 7A east of Wodehouse.

“The barn opposed across the way,
That would have joined the house in flame
Had it been the will of the wind, was left
To bear forsaken the place’s name.

“No more it opened with all one end
For teams that came by the stony road
To drum on the floor with scurrying hoofs
And brush the mow with the summer load.

“The birds that came to it through the air
At broken windows flew out and in,
Their murmur more like the sigh we sigh
From too much dwelling on what has been.”

527. We cautiously descend an almost vertical 14-rung ladder on the Trail north of Sideroad 7A. 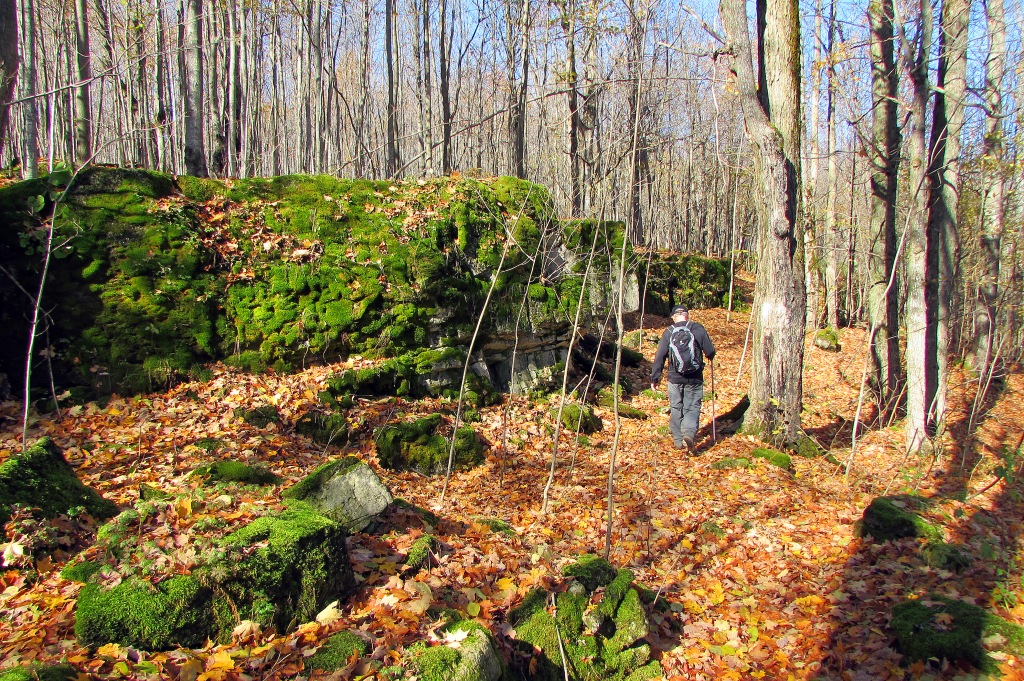 529. … and this erratic boulder seems delicately balanced on the very edge of the Escarpment. 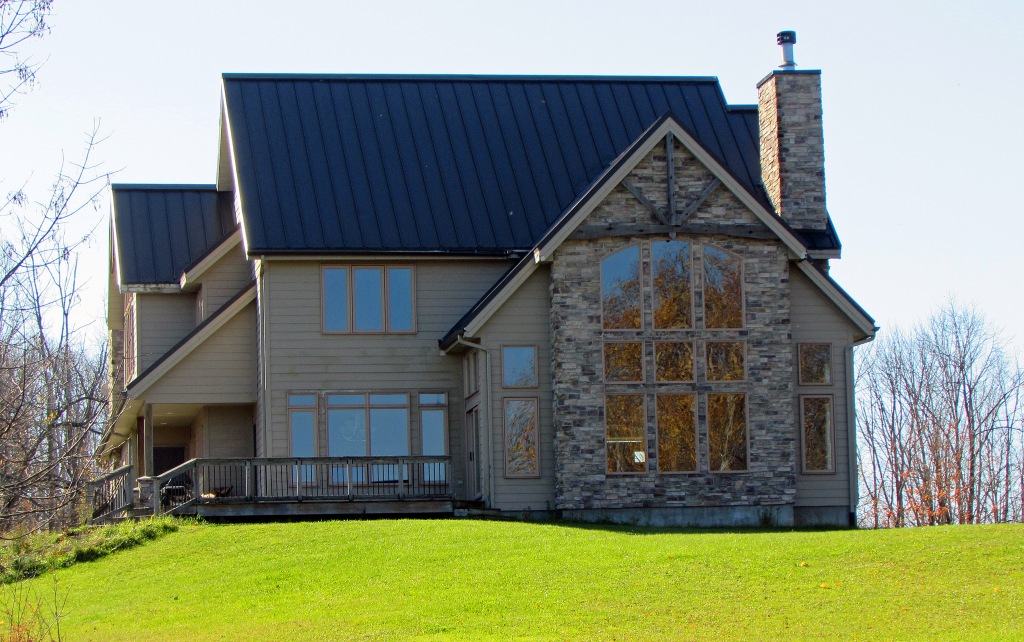 530. Wherever there is vehicular access to the edge of the Escarpment, you’ll find a new McMansion, and where there is a McMansion, there will be a neatly mown suburban lawn in front of it.

531. It is of course the view that the McMansion builders are after. This one overlooks the north end of Beaver Valley, with the Blue Mountains lining the horizon and Nottawasaga Bay barely visible as a faint blue line at the left edge of the image.

532. That unobtrusive little rectangle above the Bruce Trail blaze and white diamond indicates that we are sharing the path with the “Sentier National Trail,” not an entity that we have heard of until now. Research reveals only a little about this Trail: it was founded in 1971, is about 3,000 km long, has now been rebranded the “National Hiking Trail,” and is not to be confused with the Trans Canada Trail, itself rebranded in 2016 as “The Great Trail.” It’s unclear whether the National Hiking Trail is a continuation of the Sentier National, a trail confined to Québec. By the way, the 24,000 km Trans Canada, sorry, Great Trail has recently come under fire for misleading advertising and posing a serious hazard to those attempting to hike it: at least 8,500 km of it is along highways and a lot of the rest is shared by motorized vehicles. Will Ferguson’s Beyond Belfast (2009) is a hilarious, hair-raising account of circumnavigating Northern Ireland by foot on the “Ulster Way,” a “national hiking trail” that flits in and out of existence, exposing walkers to all sorts of horrific dangers. All of this should make us value the Bruce Trail, which really does exist thanks chiefly to its dedicated team of volunteers, even more highly.