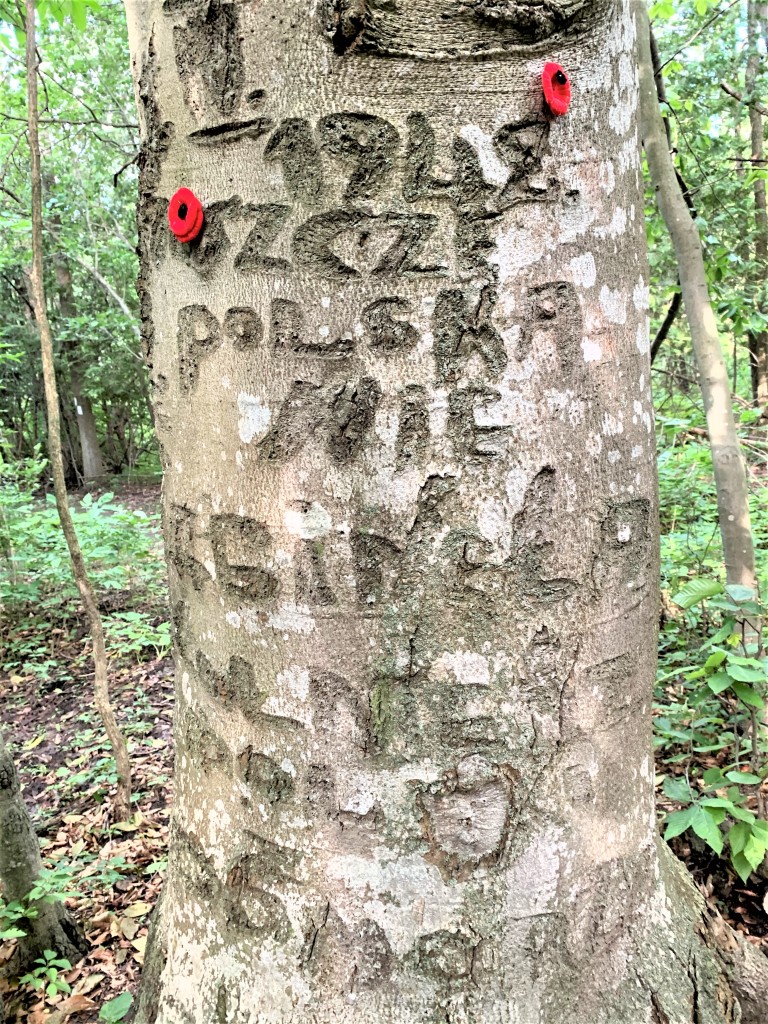 643. In 2006, a Bruce Trail worker noticed a strange inscription on a beech tree at the junction of the Main Trail and the Clearview Side Trail, close to our start point today. The inscription reads, “14 IV 1942. JESZCZE POLSKA NIE ZGINĘŁA. ZOŁNIERZ WOLA POMAGAC.” To translate: the date, 14 April 1942, is followed by the first four words of the Polish national anthem, which mean, “Poland is not yet lost.” Then come three words that signify, “This soldier will help.” According to the Owen Sound Sun Times (3 May 2019), “Local historians believe a young Polish soldier carved those words, likely with his bayonet, while in the area to train at Camp Tadeusz Kosciuszko, a Polish Army camp in Owen Sound. … Early in the Second World War, three-quarters of Poland’s troops had been taken prisoner after the swift Nazi occupation. Camp Kosciuszko was part of an attempt to fight back. Poland’s exiled government in England negotiated with the Canadian government to recruit and train volunteers in Canada for the Polish Armed Forces. Recruitment began in 1941 and about 700 Canadians and Americans of Polish descent received basic and mechanized infantry training at the camp on 14th Street West. Polish officers were billeted in city homes, while soldiers were located in the barracks of the renovated North American Furniture Factory. The camp operated from Sept. 1, 1941, to May 4, 1942.” The “Polish Soldier Tree,” as it’s now called, is not in good shape and its inscription is fading. But a plaque has been installed next to it that briefly summarizes the significance of this touching reminder of World War II.

644. For almost two km, the Trail runs along the hard shoulder of Grey Road 26 westbound towards Owen Sound. We try not to be so distracted by the spectacular cloudscape that we stray into the fast-moving traffic. At this point I should mention that if the photos on this and subsequent hikes seem a little … inferior in quality, that’s because they were taken with my iPhone. My Canon camera suddenly ceased to function at the end of our last hike, probably the result of its having been severely traumatized by the Palisades section of the Trail east of Owen Sound. The camera, only six months old, is currently being repaired, which in the current interesting times could take anything from six weeks to never.

645. Lying discarded on the shoulder of the highway: a Harley-Davidson pandemic face mask. How cool is that? 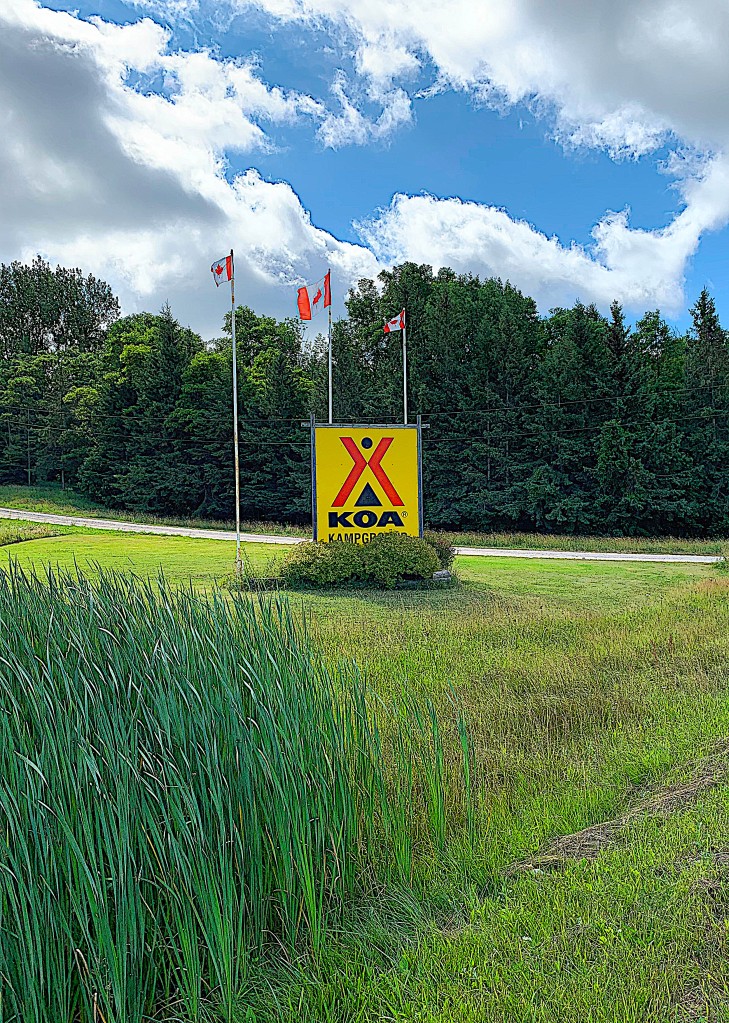 646. We turn south along the shoulder of not-quite-so busy 10th Concession. After 1.5 km the Trail makes a left turn into a KOA campground. KOA stands for “Kampgrounds of America,” an organization that operates the world’s largest system of private campgrounds and is headquartered in Billings, Montana. There there are more than 500 KOAs in the USA, but only 33 Kampgrounds in the whole of Kanada, so if you are a Kommitted Kamper, to find a KOA in Owen Sound is Kopacetic. Question: You are two adults and two Kids accompanied by your pet Kockadoodle and Kockatoo, your RV is under 35 feet long, and you require full hookups. How much is it to park your RV at Owen Sound KOA? Answer: about $75 per night plus $20 plus taxes if you want to choose your Kampsite in advance … 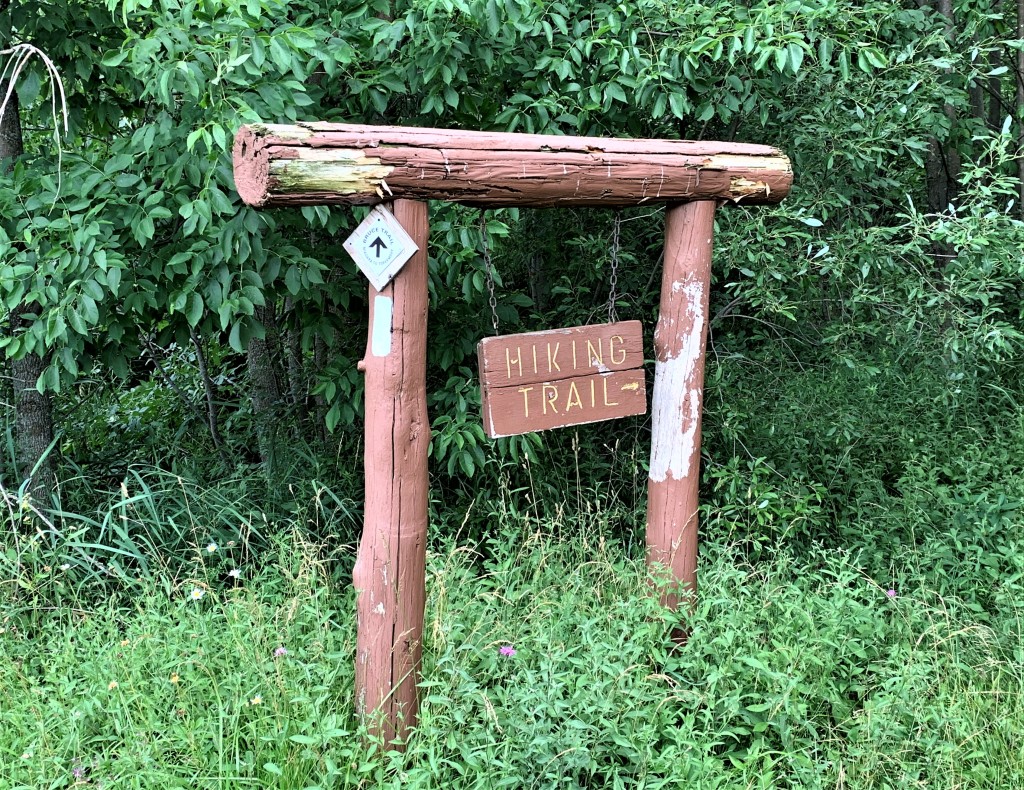 648. Direct access to the Bruce Trail is a feature of this KOA Kampground, though the sign could do with some TLC …

649. … and after leaving the main Kampground the Trail covers two long sides and one short side of a rectangle through a cedar forest. We don’t see another soul, so I guess few Kampers come to Owen Sound KOA specifically for the Bruce Trail experience.

650. Then, most unexpectedly, the Trail enters an area of giant dolostone blocks riven by caves and crevices. 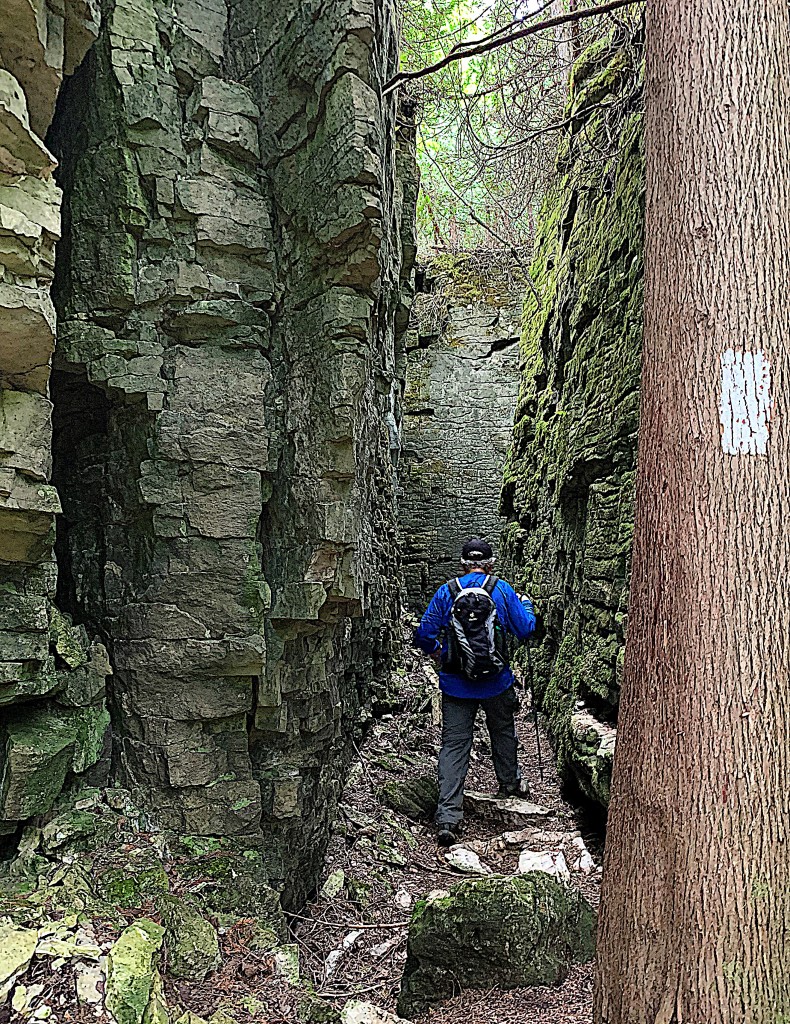 651. This doesn’t appear to be a conservation area, in fact it doesn’t even seem to have a name, yet it’s one of the most extraordinary sections of Trail we’ve come across …*

*It’s called Boyd’s Crevice. Many thanks to Julie Hobin for this information. 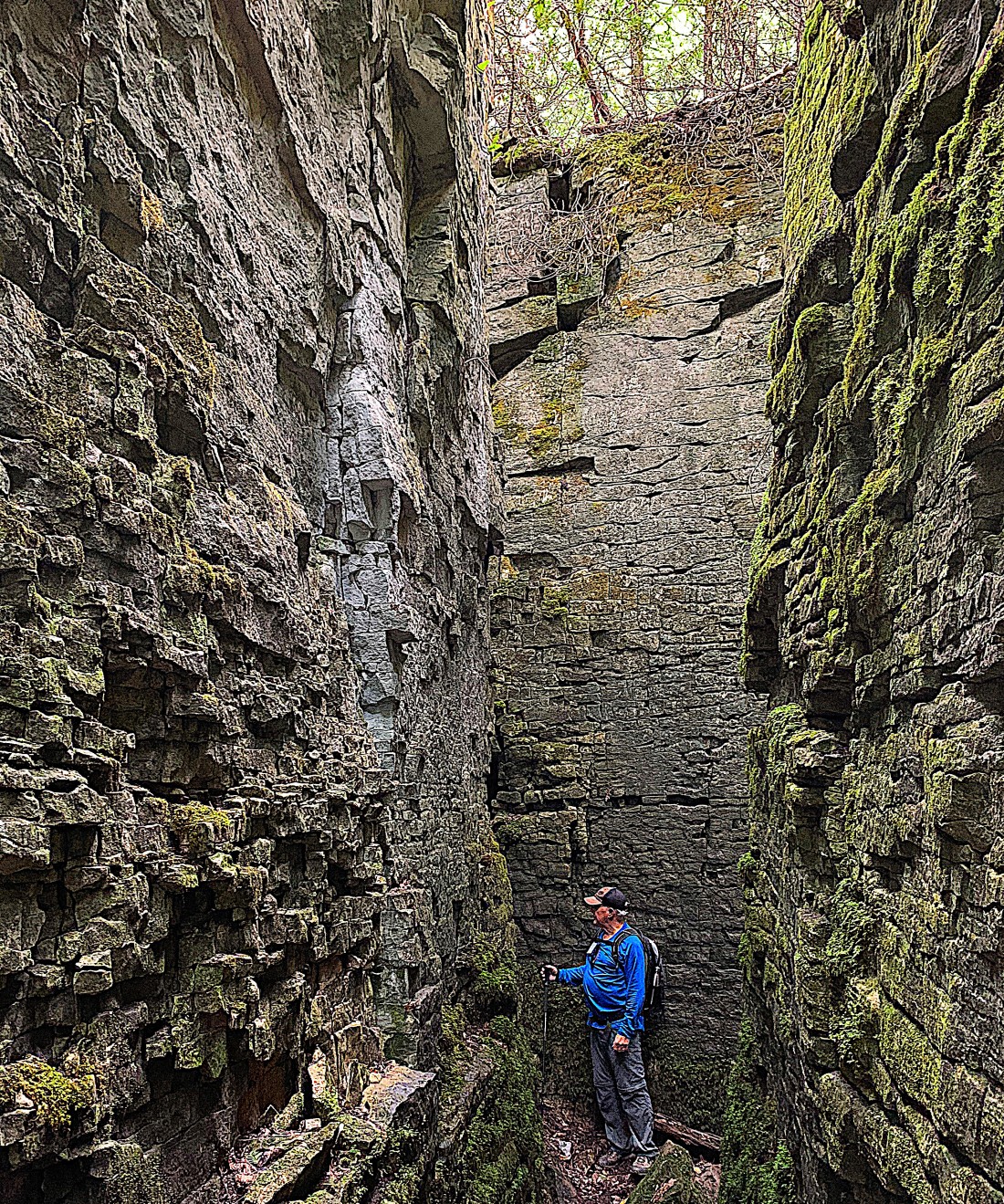 652. … with sheer walls that look manmade, but aren’t. At this point the local Trail marker clearly had fun sending hikers into what looks like a dead end in a box canyon. But there is a narrow way forward … 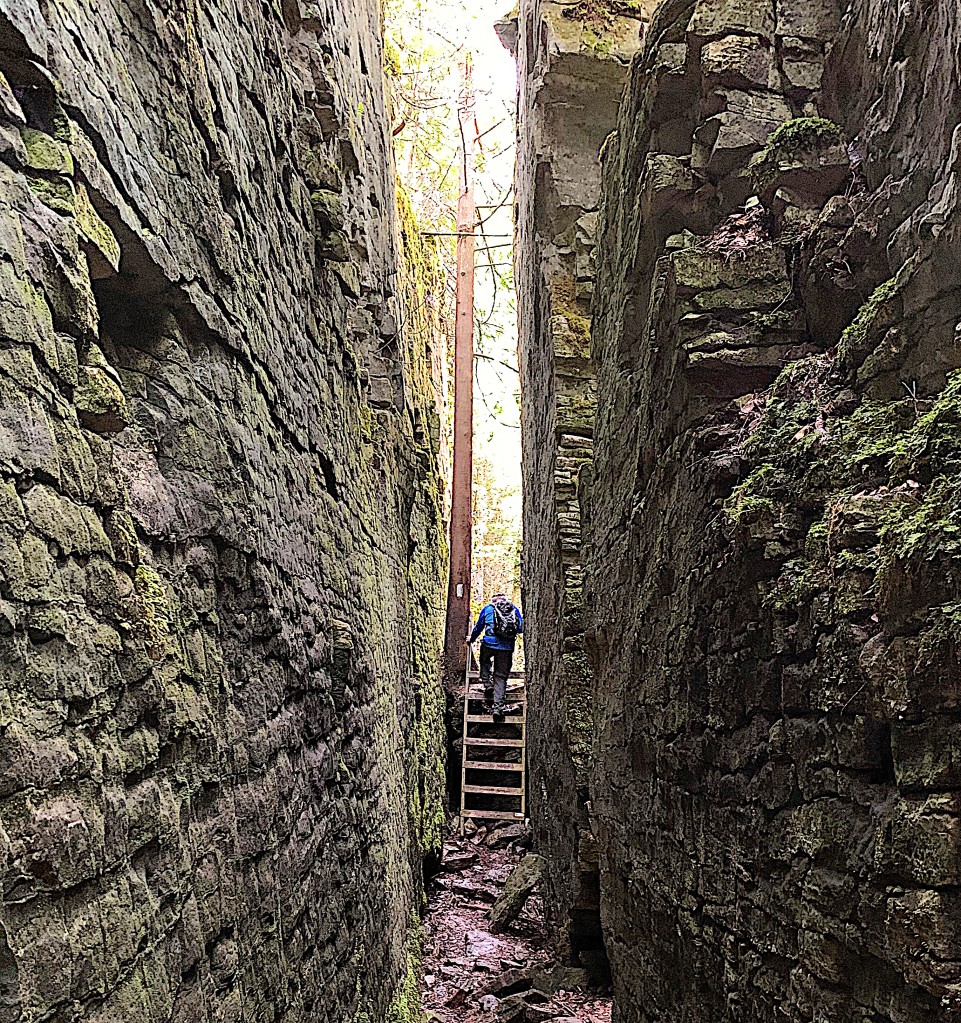 653. … and soon we climb a short ladder out of what looks the dungeon of a ruined medieval castle … 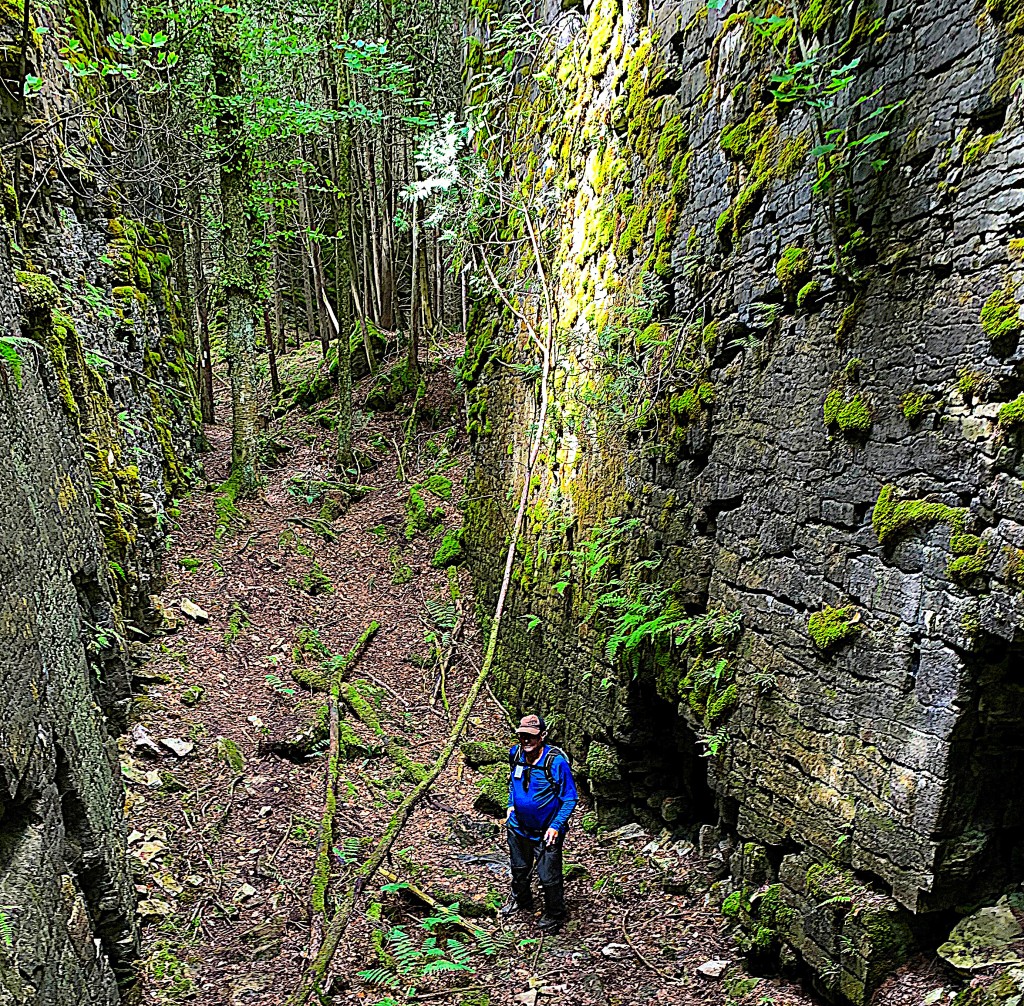 654. … to find ourselves in a wider gulch, the walls of which get enough light to cultivate patches of bright green moss. You can see a Bruce “turn right” blaze on a tree in the background.

655. And as we leave the castle dungeon, and reach that “turn right” blaze, there’s a giant fallen slab of Escarpment almost perfectly pyramidal in shape. This spectacular section of Trail is less than one kilometer long, and soon, as suddenly as we entered it, we leave this Cyclopean landscape of the kind that H.P. Lovecraft would have adored, as it reeks of the Cthulhu Mythos, and emerge into bland country on the edge of a golf course.

656. No, Mike hasn’t been vandalizing the Trail. This “right turn” blaze on a small wooden board was nailed to the stile, and as Mike was climbing he used it as a grip and it came away in his hand. And no, we didn’t keep it as a souvenir but left it carefully propped up by the stile, just to prove what good Trail citizens we are. “At least you could have turned it upside down to send the next hikers astray,” you say with a mischievous twinkle. Well, you know what? If you turn a right turn blaze upside down you get … a right turn blaze! Such is the cunning genius of the Bruce Trail. 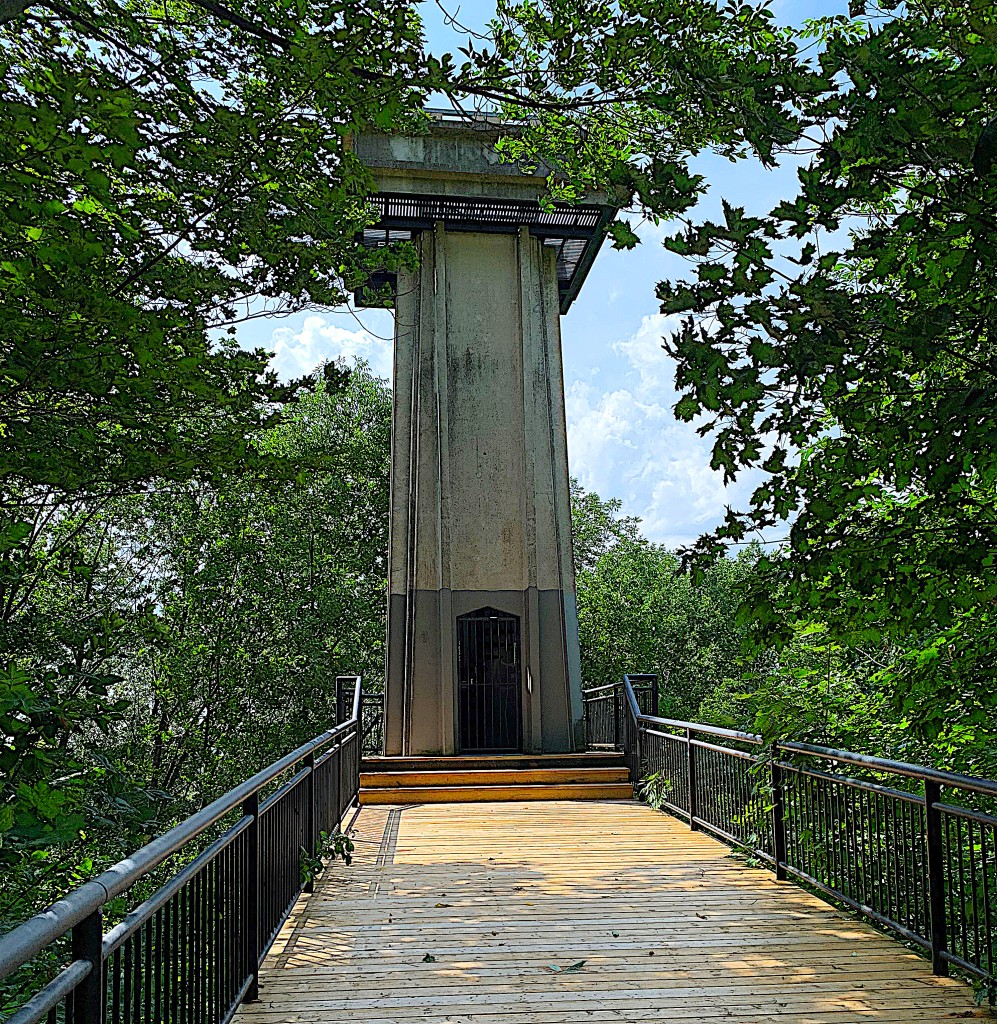 657. Our end point today is this structure just off the west side of Highway 6 & 10 at the southern edge of Owen Sound. It’s Centennial Tower (opened in 1969), a 30-metre-high observation tower giving a panoramic view of the city. It was restored in 2001, but, needless to say, has now been closed thanks to COVID-19. It has an open lower deck, but that gives a view only of the surrounding treetops. The tower was built on the site of a former lime works, that is, a place where limestone was mined from the edge of the Escarpment, mixed with sand, fired in a kiln at 900°C on site, then turned into building mortar with the addition of water. The operation came to an end when lime mortar was largely replaced as a construction material by the development of Portland cement – limestone mixed with 30% clay and baked at 1450°C – to which water is added to make modern concrete.