658. A cool and rainy start to the hike, the first morning of our second overnighter in Owen Sound. This is from a viewpoint in the West Rocks, overlooking the valley in which Owen Sound sits. Downtown is little more than one km away, yet aside from that top corner of one building poking out, we might be surveying a primeval forest. These photos and those of the next hike are all taken with my iPhone as my camera is still hors de combat.

659. This charming little ladder is the highlight of the Trail’s steep descent from Springmount Forest towards Grey Road 21 just west of Owen Sound. From this point on, we will be heading north up the Bruce Peninsula. 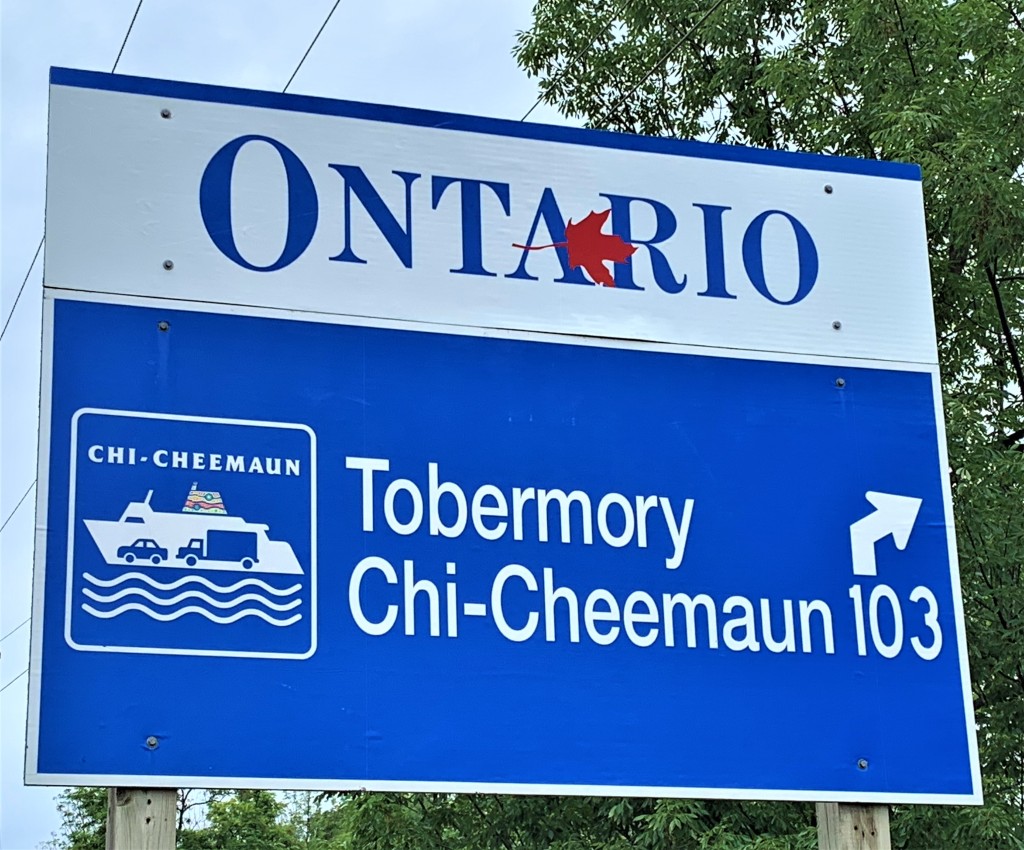 660. The sign on the highway tells us it’s only 103 km, or about 90 minutes by car, to Tobermory! But it’s still about 220 km by the Trail, approximately 18 more hikes. MS Chi-Cheemaun is the car ferry that plies between Tobermory and South Baymouth on Manitoulin Island, a gateway to northern Ontario. The ferry takes about 1 hour 45 minutes, carrying up to 648 passengers and 143 vehicles. “Chi-Cheemaun” means “Big Canoe” in Ojibwe.

661. We are now in the Pottawatomi Conservation Area, crossing the elegant steel bridge over the Pottawatomi River above Jones Falls. Pottawatomi (more usually spelled “Potawatomi”; the word means “Those who tend the hearth fire”) is a North American First Nation, related to the Chippewa and Ottawa, whose language is a member of the Algonquian family. In the nineteenth century, many Potawatomi in the midwestern US were forcibly relocated via “Indian Removal” to reservations in Nebraska, Kansas, and Oklahoma, though a small number escaped to Canada and remain to this day in southern Ontario. The notorious “Potawatomi Trail of Death” of 1838 was a deadly forced march to Kansas endured by the Potawatomi of Indiana.

662. A deep crevice in the edge of the Escarpment, probably caused by the winter expansion of ice acting like a wedge over the years to widen a crack in the hard dolomite capstone. 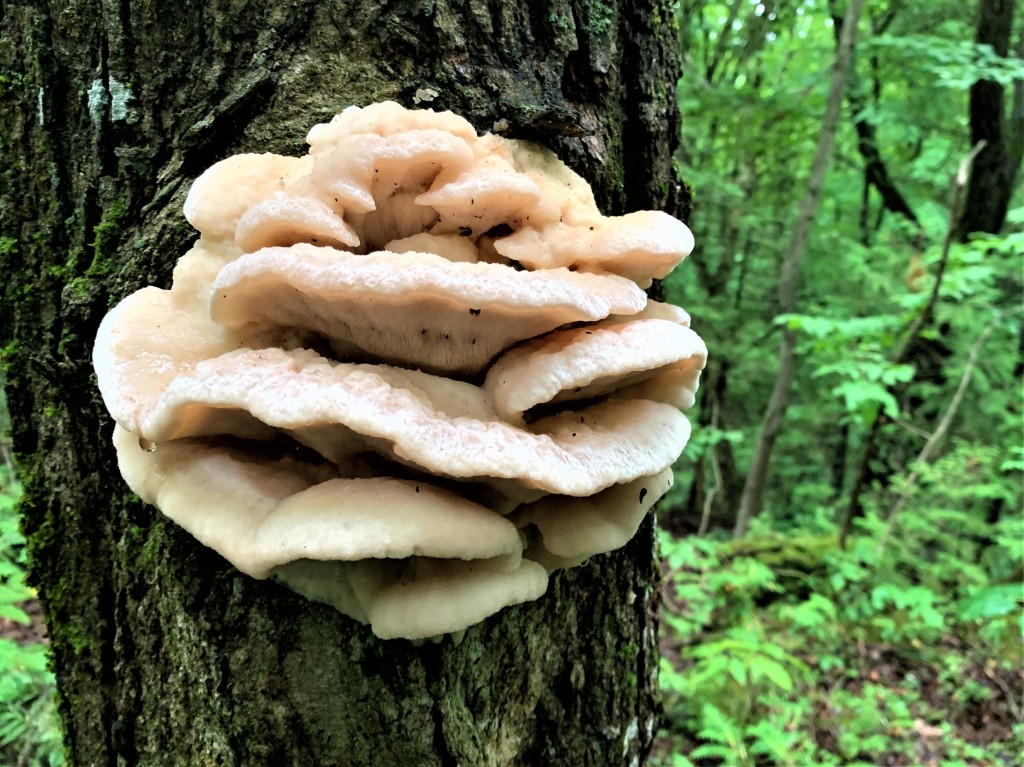 663. What is probably Climacodon septentrionalis (northern tooth fungus) forms a symmetrical layered mass on the trunk of a tree. This fungus is a parasite on the wounds of deciduous trees like maple, and will literally rot the heart of its host tree, hollowing it out until it falls. 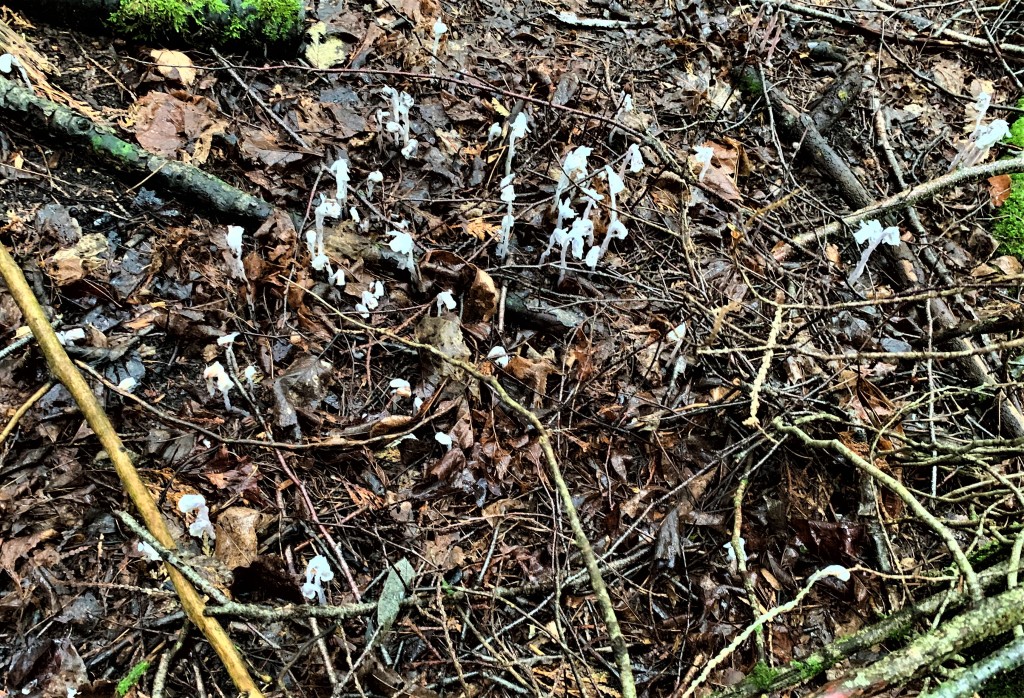 664. We thought at first these were mushrooms growing in a dark, damp section of forest, but actually they are Indian pipes (Monotropa uniflora), a.k.a. ghost pipes or corpse plants. These unusual flowers don’t contain chlorophyll, accounting for their white, spectral appearance. Not requiring sunlight, they are myco-heterotrophic, or parasitic on certain kinds of mycorrhizal fungi, which are themselves in a symbiotic relationship with tree roots, the ultimate source of the flowers’ nourishment. Fans of Emily Dickinson will know that the poet, a knowledgeable botanist, strongly identified with this weird plant. When her advocate Mabel Loomis Todd sent her a picture she had painted of some Indian pipes, Dickinson wrote: “Dear Friend, That without suspecting it you should send me the preferred flower of life, seems almost supernatural, and the sweet glee that I felt at meeting it, I could confide to none. I still cherish the clutch with which I bore it from the ground when a wondering Child, an unearthly booty, and maturity only enhances mystery, never decreases.” Indian pipes adorn the cover of the poet’s first book of poetry, published posthumously in 1890. So what was the reason for Dickinson’s strong identification with the flower? She loved riddles, especially those to which there was no simple solution, but this poem (#1482, written 1879) may suggest an answer:

’Tis whiter than an Indian Pipe —
’Tis dimmer than a Lace —
No stature has it, like a Fog
When you approach the place —
Nor any voice imply it here
Or intimate it there —
A spirit — how doth it accost —
What function hath the Air?
This limitless Hyperbole
Each one of us shall be —
’Tis Drama — if Hypothesis
It be not Tragedy — 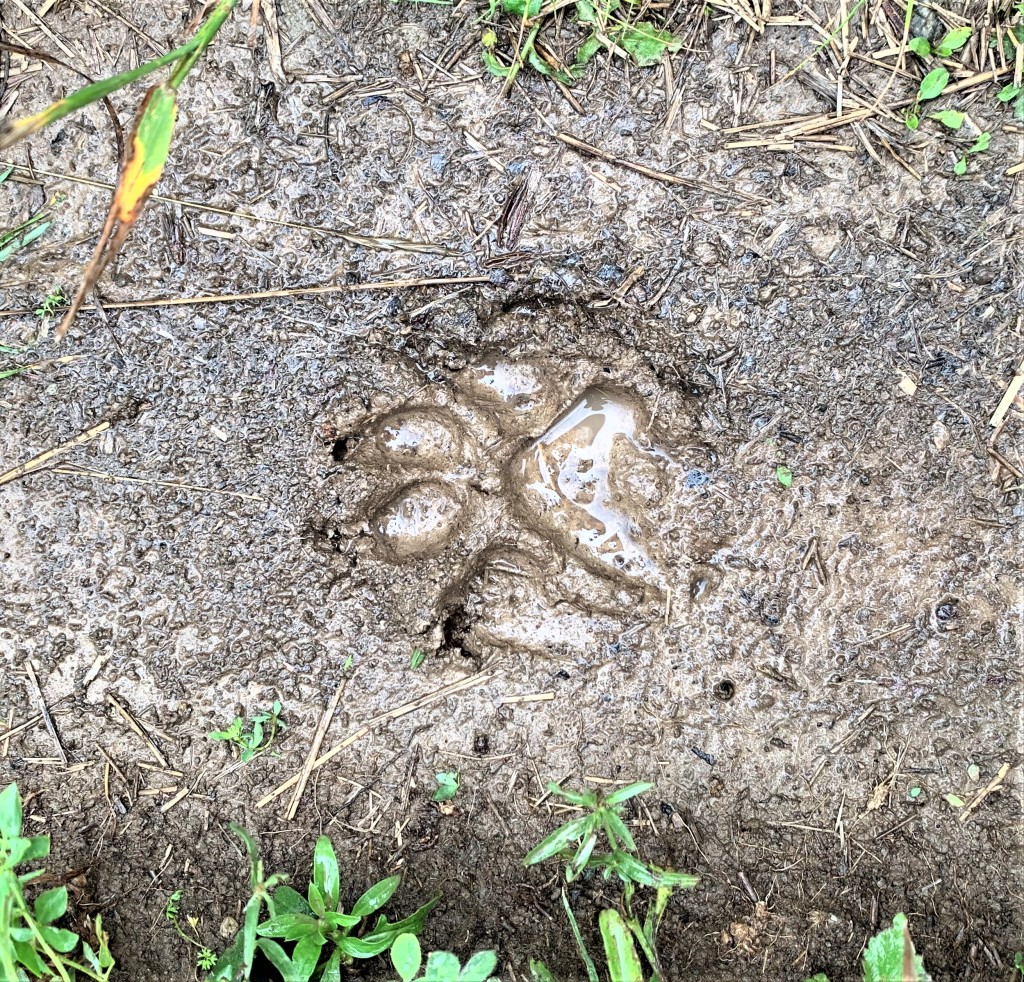 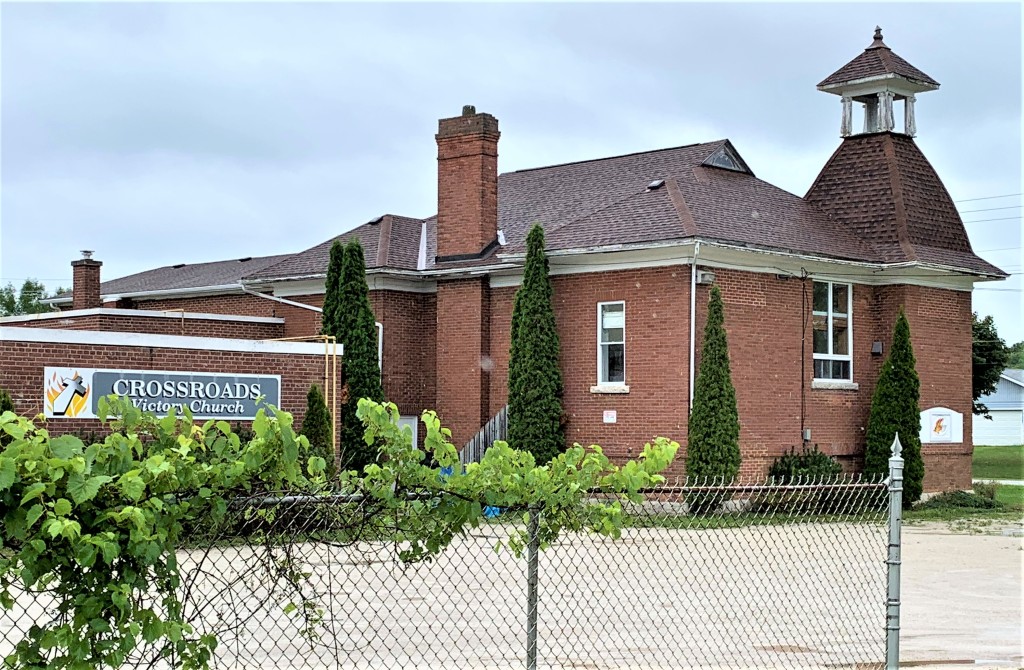 667. During a long section of Trail on roads in suburban Owen Sound, we pass this evangelical church. It’s part of the Victory Churches International movement based in the Philippines, with its Canadian HQ in Calgary. To quote verbatim from this church’s “About Us” page on its website: “We walk in Holy Spirit power. We are sold out for the goal of serving our King. He lives inside of us, therefore we are supernatural. We have His heart and mind, so we love like He loves, heal like He heals and bring people to freedom, because that’s what He purchased. We know the will of the Father, so we do it. We hear what He is saying, so we say it. We walk in victory, because we are more than conquerors in Jesus. Our greatest goal is to know our Father in Heaven and for you to know and encounter Him as well. We are a family and we’d love you to be part of it.”

668A & B. From Range Road to Benallen is 2.7 km, a distance we cover on the Georgian Bluffs Rail Trail, an abandoned CN Rail line that runs 18.3 km from Owen Sound westward to Park Head. On this section there’s a gentle but continuous elevation gain typical of rail trails. 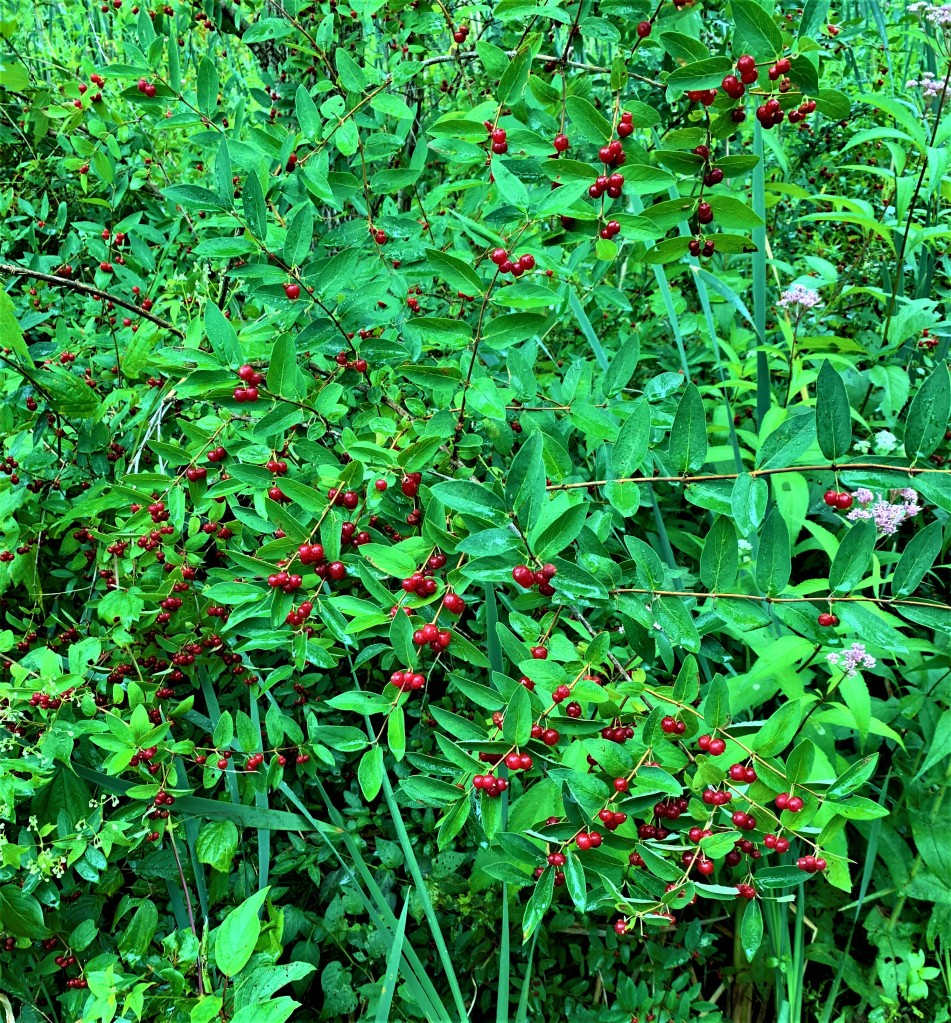 669. A fine display of red berries on a wayside shrub (probably an invasive bush honeysuckle) along the Rail Trail.

670. A convoy of loud, ecocidal ATVs driven by folks old enough to know better crosses ahead of us at Benallen junction. We are sufficiently distracted by them that we fail to notice that the Trail turns hard right here, following the route from which the four-wheelers have just come … 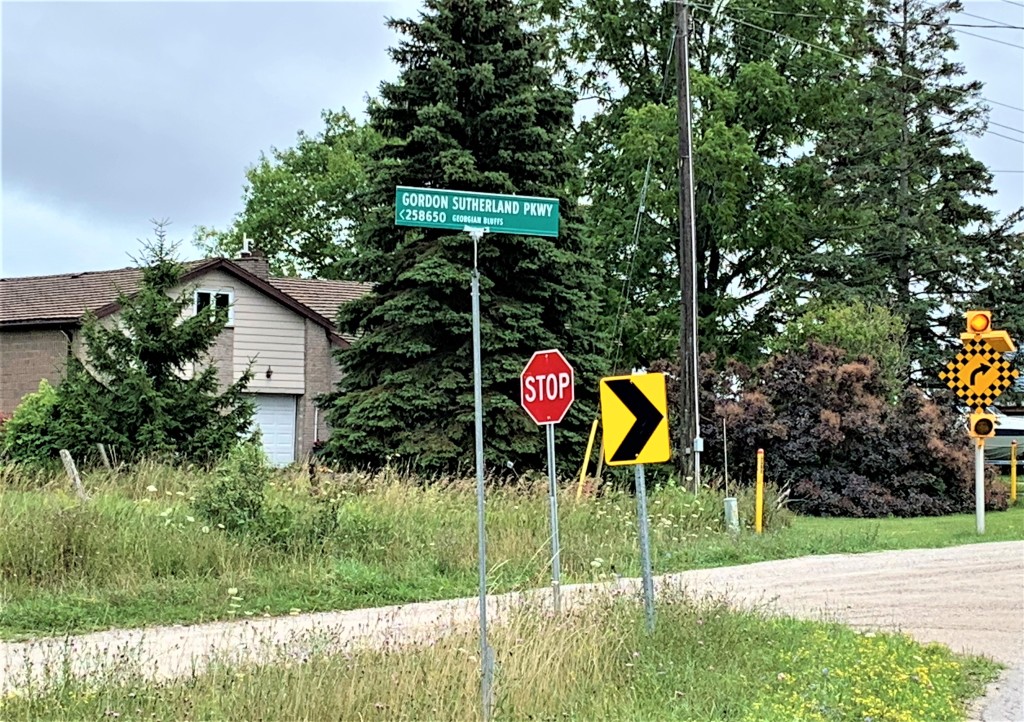 671. … i.e., up the Gordon Sutherland Parkway, which in spite of its impressive name is a single-lane gravel track at this point. We trudge the better part of one km up the shoulder of busy Grey Road 17 before we notice the lack of blazes, consult the Bruce Trail App, find that we have strayed way off track, and so must retrace our steps to Benallen. The pulsing blue dot on the BT App representing our position has guided us a number of times recently when blazes are lacking, and we resolve to check the App more often, at least in areas of good reception like Owen Sound.

672. The deep red flower of Rhus typhina, the staghorn sumac. From its appearance, “rhino horn sumac” might be a more suitable name.