Go back to Part 9

110. Hamilton is a city on two distinct levels: the older Lower City, and the newer Mountain, separated by the steep face of the Escarpment. To get between them, vehicles must take a “Mountain Access” road; pedestrians are reliant on six different flights of stairs. The Bruce Trail crosses all of them, and the first it meets are Uli’s Stairs. These 305 stone steps with wooden handrails and decorative flowerbeds were completed in 2007, hand-made by an Austrian-born gentleman. Uli (short for Ulrich) built them at his own expense as a retirement project at a time, not so long ago, when there was no pedestrian access between this part of the East Mountain and the Lower City. Uli’s Stairs are featured on Google Maps, where they have a 5-star rating. The City, though nervous about liability, has so far left Uli’s masterwork alone. We fellow-retirees salute you, Uli!

111. The Kenilworth Stairs are only 500 metres north of Uli’s, and were completed around the same time. They have two lanes of 228 steps, with bike troughs at each side, and were built at a cost of $425,000. They are more evenly spaced than Uli’s and have metal “teeth” that give shoes a good grip in inclement weather but are very hard on dog’s paws (or unshod human feet). There are convenient landings (but no flower beds). Kenilworth Stairs are used by about 500,000 people a year, and had to be fixed recently at an additional cost of $95,000 because all those people tramping up and down destabilized them. If you want a serious cardio workout, jog up and down the Kenilworth Stairs. If you and your dog are feeling adventurous, try Uli’s Stairs.

112. Wild bergamot (Monarda fistulosa), a.k.a. bee balm, a native member of the mint family, is flowering everywhere at the moment. Its aromatic nectar attracts bees and butterflies. (Hummingbirds are drawn to its red cousin Monarda didyma.) Its name comes from its similar aroma to that of the bergamot, an Old World bitter orange. The plant has many uses in Native and alternative medicine, including a tea which, sweetened with honey, is used to treat colds and flu. 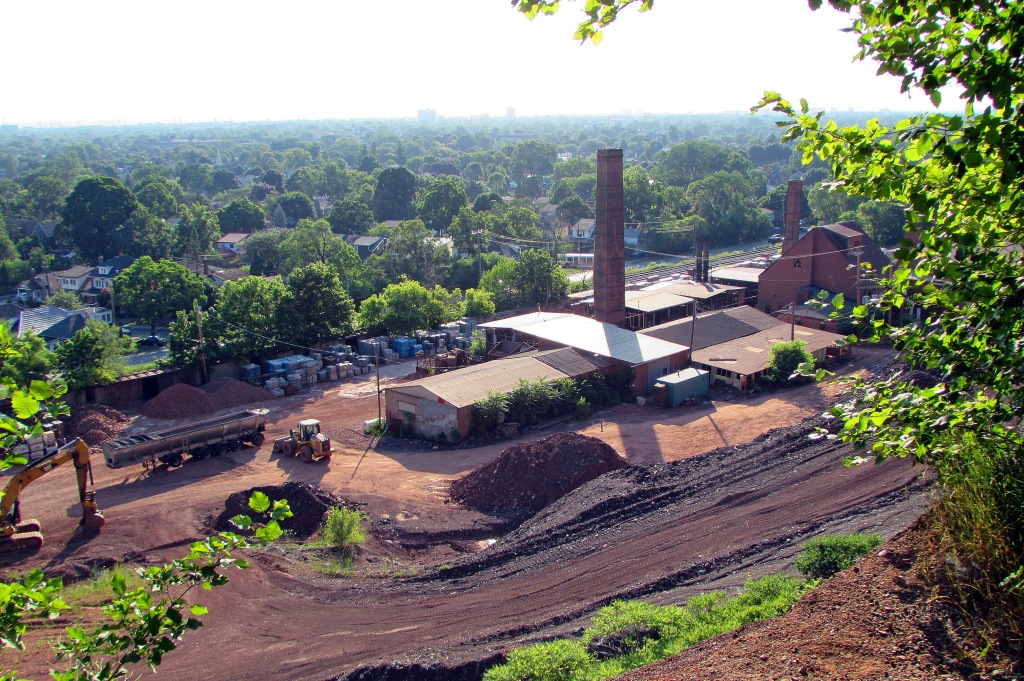 113. We’re now on the Escarpment Rail Trail, once part of the Hamilton & Lake Erie line, later CN, that runs along the face of the Mountain. In 1993 the abandoned line was turned into a pedestrian and bicycle path, and now the Bruce Trail shares part of it. Here there’s a view over the Hamilton Brick Company (now Century Brick) on Lawrence Road. Hamilton’s oldest brickworks made much of the beautiful red brick in the city’s older buildings. It still operates on a small scale, though it has to import clay from elsewhere as it’s no longer legal to quarry the Escarpment. The old brickworks is often used as a historical movie location. And one of its red bricks with the city’s name stamped into it has become a popular souvenir of Hamilton.

114. Farther west along the Trail and Hamilton Harbour comes into view. This stretch of water, actually the extreme western tip of Lake Ontario, is separated from the main lake by a seven-km-long sandbar with a short channel (the Burlington Canal) cut through it. Large freighters, such as this vessel, access the Harbour through the Canal. Hamilton is the busiest of all Canadian Great Lakes ports, visited by about 700 vessels per year, over a quarter of which are registered overseas.

115. Farther west still, and the Burlington Skyway comes into view behind the heavy industrial plants that line most of the south shore of Hamilton Harbour. The Skyway, originally opened in 1958, is the larger of two bridges spanning the Burlington Canal. The current twinned and upgraded Skyway dates from 1985. It’s about 2.5 km long with a 36.7 metre clearance, allowing large vessels to pass underneath. It carries eight lanes of the QEW, the main highway linking Toronto to the US border.

116. Now the Trail runs alongside Arkledun Avenue, a road that provides, via the steep, double-hairpin Jolley Cut, one of the main vehicular routes between the Lower City and the Mountain. This panorama of downtown Hamilton includes the Olympia Condos (98 metres, 1976) at left and the city’s tallest skyscraper Landmark Place (130 metres, 1974) at right. Both these tall buildings are residential.

117. On the lowest part of Arkledun, the Trail passes these two old stone buildings, incongruous in this streetscape of high-rise apartment towers and heavy traffic grinding up the Mountain. They are actually outbuildings of Rock Castle, a stone mansion built in 1848 and invisible from this perspective. Hamilton retains a number of fine 19th-century buildings in local stone: dolomite from the top of the Escarpment or sandstone from the bottom.

118. Now west of downtown, the Trail slopes gently down from near the top of the Escarpment. Here the dolomite cap resembles a high wall, its layers clearly visible. 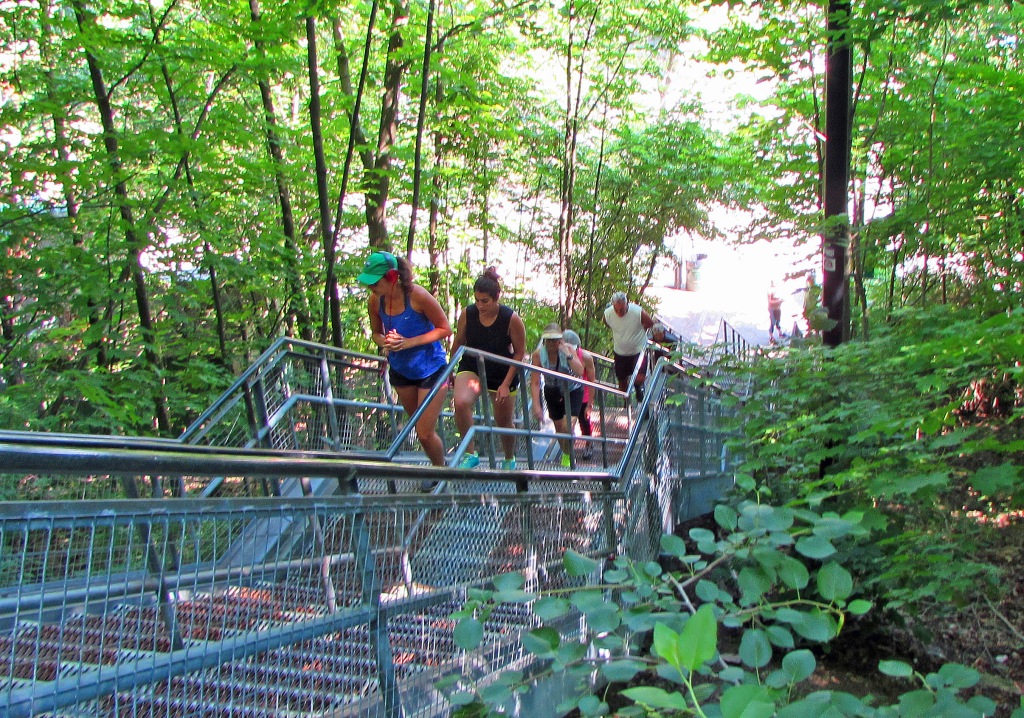 119. Here the Trail meets the Chedoke Stairs (289 steps, two lanes, bike troughs), the westernmost of Hamilton’s six flights. These are certainly taking a pounding from all the people working out by jogging up and down them. The Bruce Trail descends the lower part of these Stairs and then continues west along the Chedoke Radial Trail.

120. Between the foot of Chedoke Stairs and Scenic Drive, the Bruce joins the Chedoke Radial Trail. This is yet another of Hamilton’s multi-use trails using the beds of former rail lines, in this case a short-lived (1908-31) electric interurban (“radial”) line to Brantford. These rail lines were ingeniously built at great cost to allow trains to climb the Escarpment gradually, and they make excellent bike paths (and accessible hiking paths) for that reason. Here the Trail crosses Chedoke Creek on an elaborate steel Bailey bridge* that cost almost $1 million in 2012 when it replaced the previous, no longer safe bridge … that had lasted only five years! (*A Bailey bridge is a prefabricated portable truss bridge developed by the British military in WWII.)

121. The fact is, the Hamilton Mountain, and the Niagara Escarpment of which it is a small part, is a geologically highly active feature. What this means is that significant erosion takes place year-by-year, rather than, say, over the course of millennia. In a few years, Chedoke Creek will almost certainly undermine that Bailey bridge. A sight like the above is common on this part of the Trail: trees and shrubs growing apparently from the rock itself. This vegetation slows the erosion process: the roots hold the rocks together. Any removal of living trees, like that caused by new construction close to the Mountain Brow, serves to destabilize the area.