Go back to Part 8

100. Little did we anticipate when we finished our last hike in Stoney Creek on 6 June that it would be an entire calendar month before we returned to New Mountain Road to continue our odyssey. Life intervened, as it tends to: “Want to make God laugh? Tell Him your plans.” Anyway, it’s now early July and we are back on track. Literally! We cross New Mountain Road on a Canadian Pacific Railway bridge before re-entering the woods of the Escarpment. The weather is very hot and humid (32C, feels like 38C), and it will continue like this for weeks.

101. Gradually Hamilton starts to unveil itself below. Here you can see some of the steel plants in the east end of the city. The Escarpment can be seen on the horizon. We will soon be following it as the Trail makes a U-turn around the western tip of Lake Ontario, and then heads east, instead of west as it has done so far. Q. Why are smokestack industries almost always located in the east end of cities in the Northern Hemisphere? A. The prevailing winds blow from west to east as the Earth turns, so the wealthy establish their factories in the east end of cities and then live in the west end to avoid the worst effects of airborne pollution. 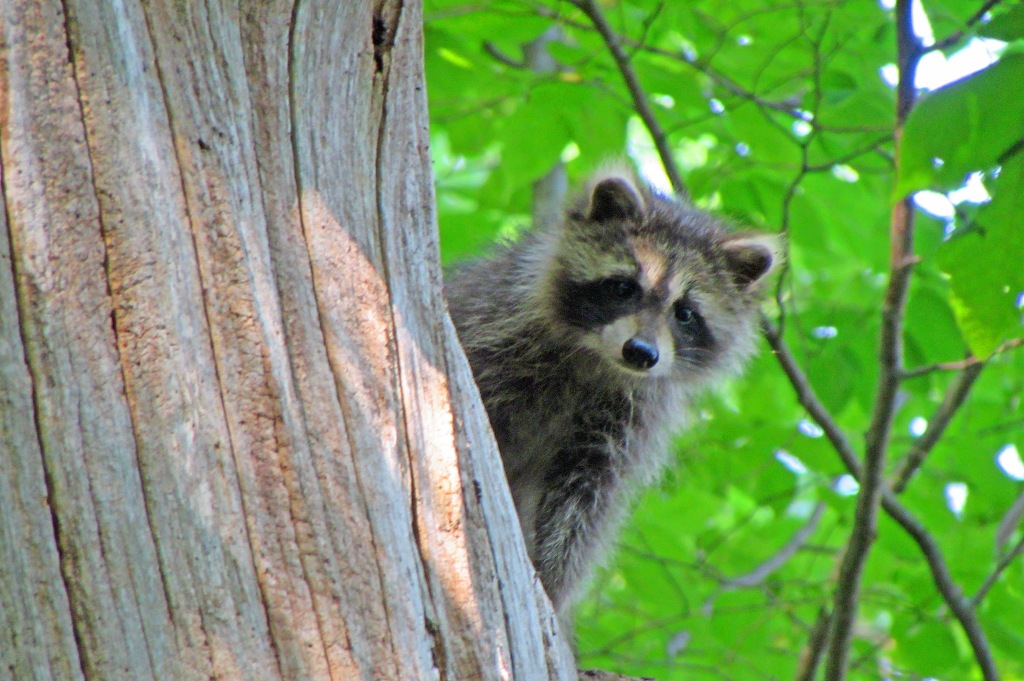 102. A movement in a tree on the slope of the Escarpment reveals itself as a raccoon and her kit. Mom prefers to keep a low profile, but Kit is curious (and very cute). Raccoons have made themselves as completely at home in Hamilton as elsewhere in urban southern Ontario. After all, it’s only a short stroll from here down to suburban garbage cans at the foot of the Mountain.

103. The lip of Felker’s Falls, a terraced ribbon falls, one of the more than a hundred waterfalls within Hamilton’s boundaries. Post-industrial Steeltown has embraced its new nickname, “City of Waterfalls.” This is the point at which Davis Creek (not very energetic at this time of the year) drops 22 metres in stages over the edge of the Escarpment. The Falls is named after the family of Johann Friedrich Voelkel (1757-1838), who emigrated in 1773 from Prussia to the American colonies, then moved in 1794 to Upper Canada as an Empire Loyalist, settling finally in 1820 in this area. The family anglicized their name to Felker and lived hereabouts for several generations. 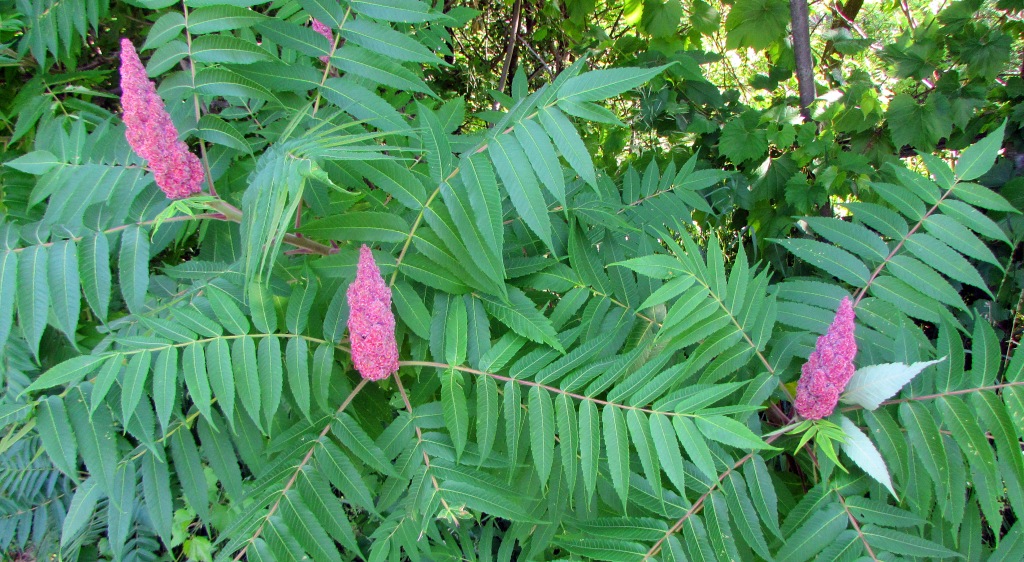 104. Pink “bobs” (each a cluster of drupes) of the staghorn sumac (Rhus typhina) by the Trail in Felker’s Falls Conservation Area. The sumac’s hairy twigs are supposed to resemble the “velvet” on the antlers of stags, hence staghorn. This shrub is native to southern Ontario, well adapted to urban conditions, and striking at most times of the year. The bobs turn deep red later in the year and often last through the winter.  The dried berries and leaves of the sumac were mixed with tobacco and smoked by some First Nations peoples.

106. Now we enter the Red Hill Valley, the most significant river valley in Hamilton’s east end. In spite of protests by environmentalists and First Nations, a seven-kilometre-long four-lane expressway, the Red Hill Valley Parkway, was constructed through the Valley to form the eastern section of Hamilton’s ring road. It opened in 2007 and has a poor reputation for safety, possibly due to its steep, serpentine descent of the Escarpment. 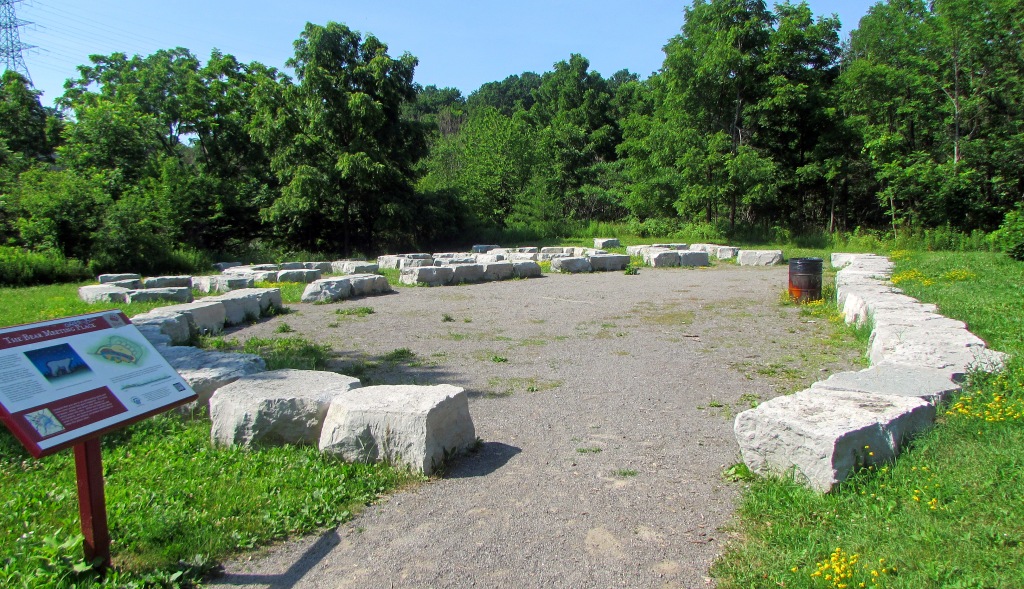 108. This is the Bear Meeting Place, where the Bruce and Red Hill Valley Trails cross. The rocks have been arranged in the shape of a bear’s footprint as seen from above. This place is intended for contemplation and learning about First Nations culture. The information board notes: “The Seneca nation has a story of a giant bear called Nia’gwahe or okwari in Mohawk that once roamed these lands. Seldom seen, the bear always left his big footprints on the landscape.” This initiative was part of a collaboration between the City of Hamilton and the Haudenosaunee Confederacy Chiefs Council to help defuse the environmental controversy generated by the construction of the Parkway.

109. Today’s hike is shorter than the average, as we need to ease ourselves back into the routine, and the heat is formidable. As we approach Greenhill Avenue, we pass through a grassy clearing. It was once, apparently, the King’s Forest downhill ski area, now abandoned to Nature and the Bruce Trail. That’s just fine with us. Onward!