Go back to Part 3

Part 4: From Highway 52 to Jerseyville (March)

It’s 5.7 km from the parking lot on Highway 52 to the place where the Rail Trail crosses Jerseyville Rd. West. And if, like me, you are walking the Trail alone, unless you have a very patient and obliging friend with a car you’ll have to retrace your steps to get back to your vehicle. But 11.4 km or so is a good morning’s hike, and in very early spring the going is good: flat, straight, and dry. 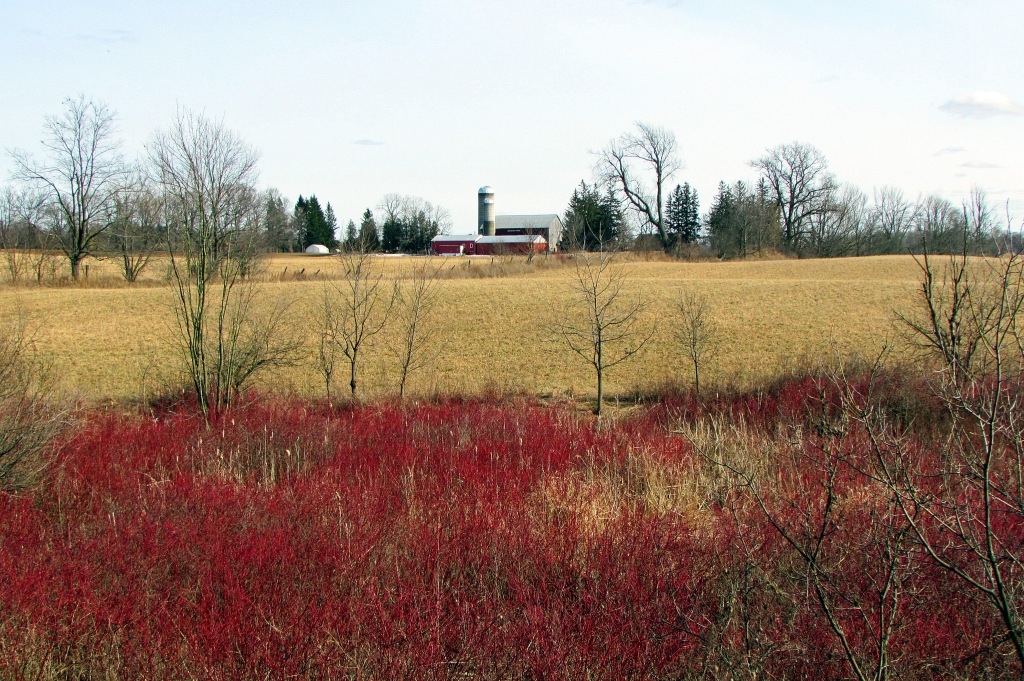 We are still technically within the boundary of the City of Hamilton, but the scene is definitely rural on this stretch of the Trail. The red osiers (Cornus sericea) on this patch of marsh make a welcome touch of colour in a muted landscape. Red osier, often called red osier dogwood, is a North American native. As its root system is strong, it can be used to stop erosion on banks, such as those flanking the Rail Trail. 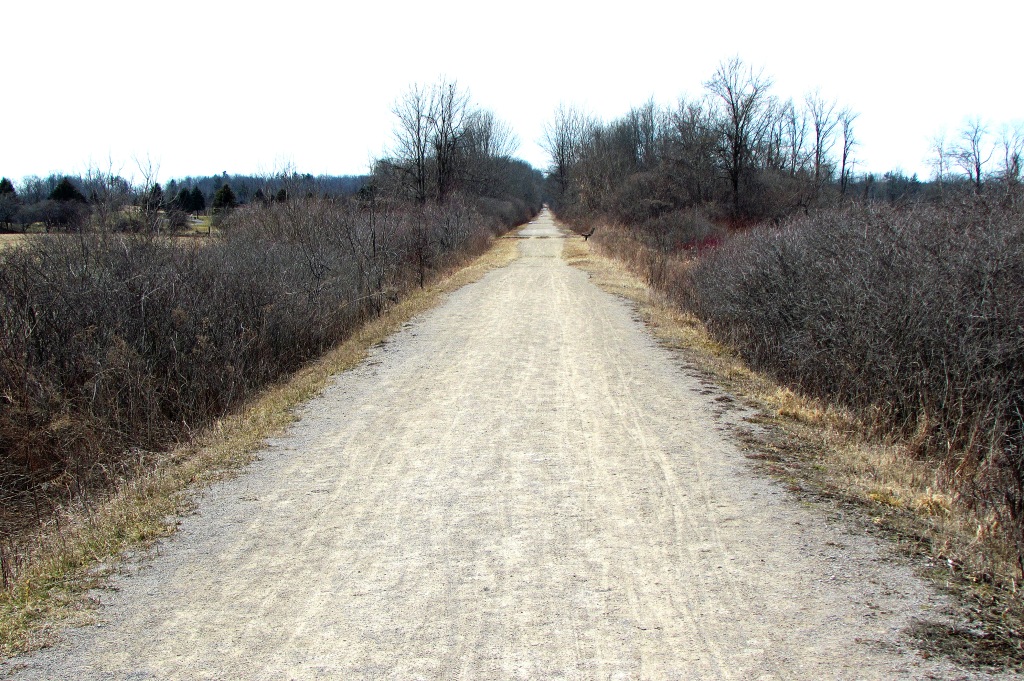 This is a better representation of the almost monochromatic quality of the landscape. The Trail here is dead straight and utterly unpeopled, allowing for peaceful meditation. It’s also in very good shape for walking or cycling (you can see innumerable tracks made by bikes), and even offers an occasional bench for the weary. 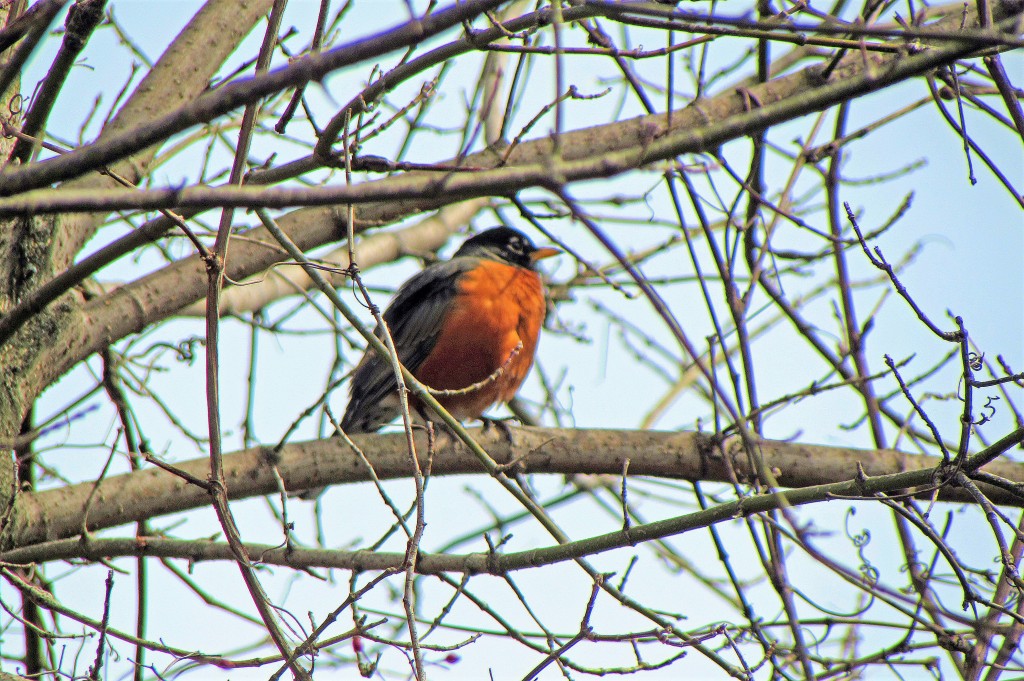 Another patch of colour is provided by an American robin. Actually a large thrush and unrelated to the smaller European redbreast, robins are hardy birds that sometimes overwinter in southern Ontario. Though their taste for earthworms is notorious, in reality they are omniverous: beetles, caterpillars, insects, berries. The females lay their first of several sets of eggs in late April. The robin is a familiar harbinger of spring in these parts. (Such an interesting word, harbinger: it comes from an Old French ancestor of Modern French héberger meaning to put up visitors or to take in refugees, but héberger itself comes from a older Germanic word for someone who travels ahead to arrange shelter for an army.) 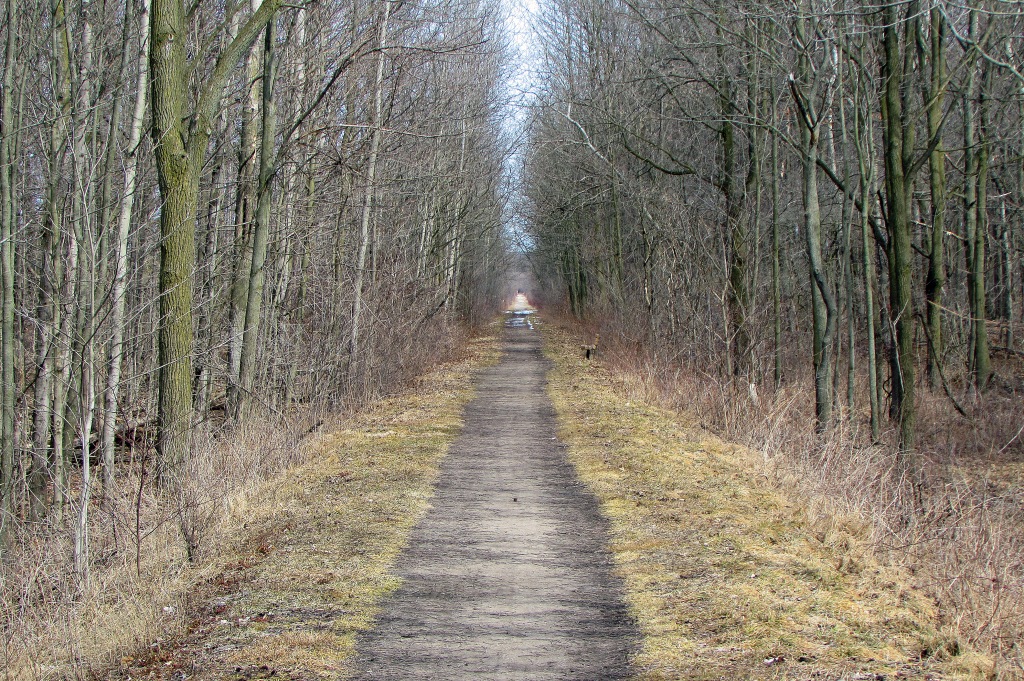 Sometimes the Trail runs through patches of forest. In such sheltered sections, there may still be a little snow or a frozen puddle on the ground. 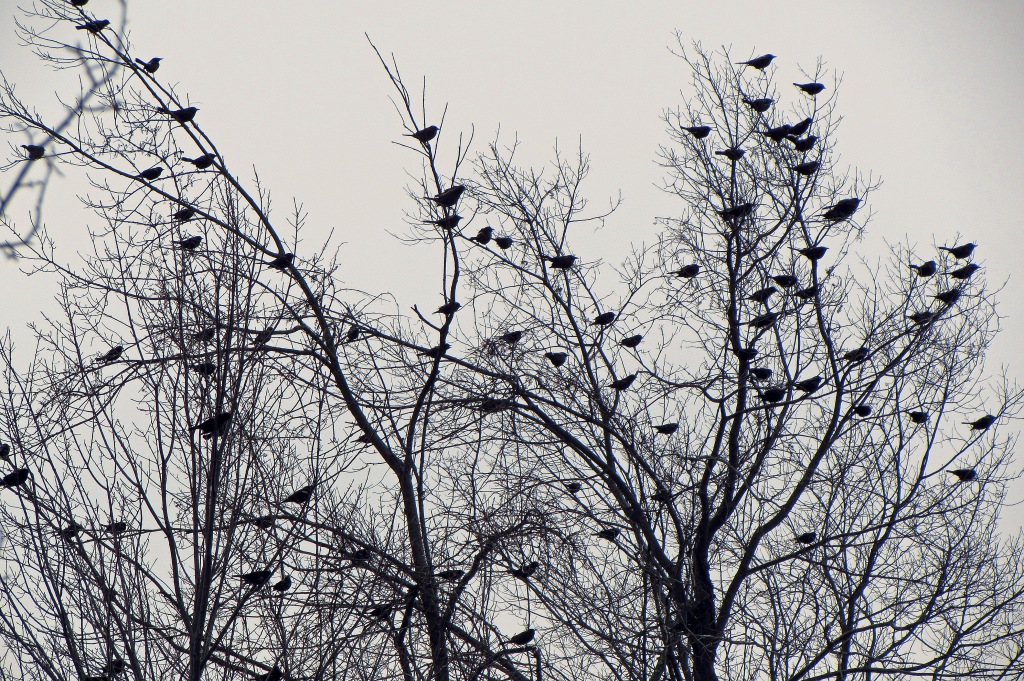 A little way ahead, it looks as if a scene from Alfred Hitchcock’s The Birds is about to unfold … 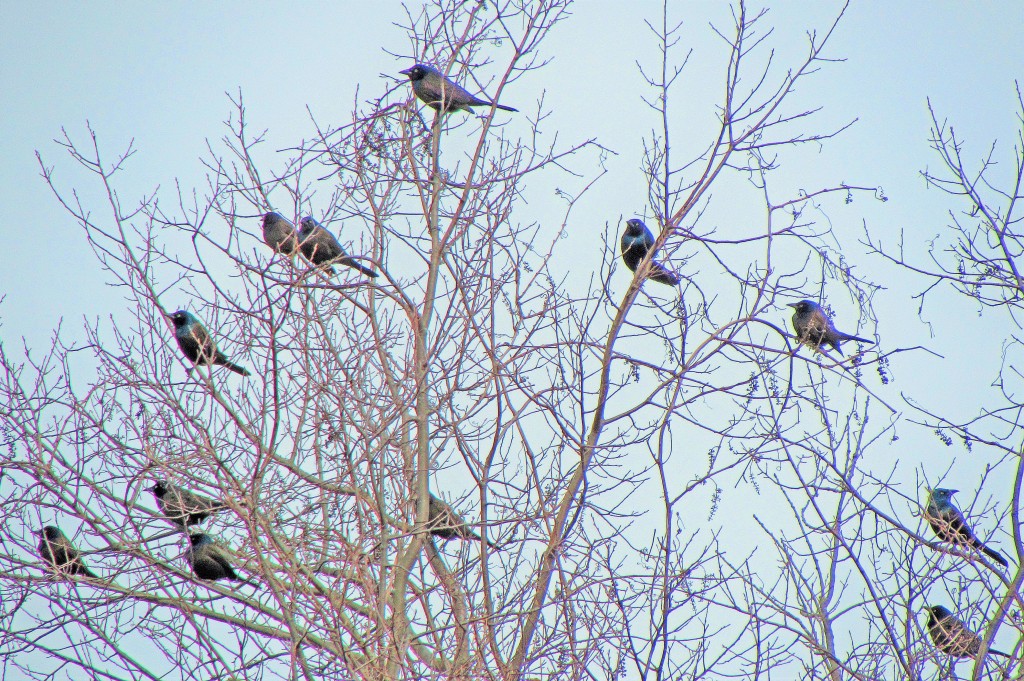 … a close-up revealing that this is part of a flock of common grackles, with purplish-blue slightly iridescent heads. They typically forage for waste grain in open fields. 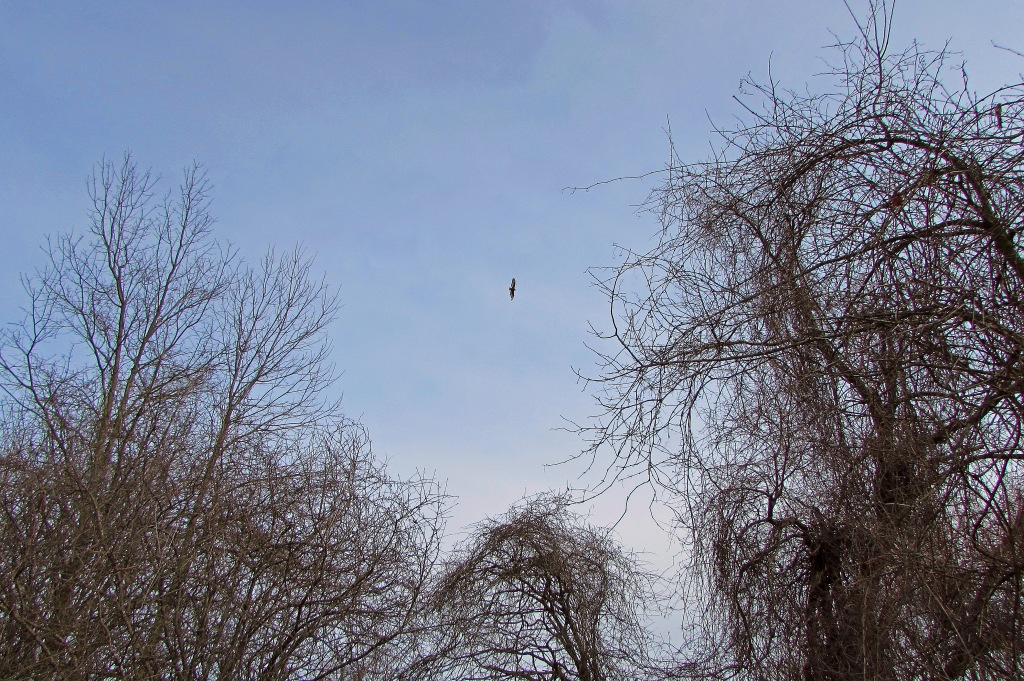 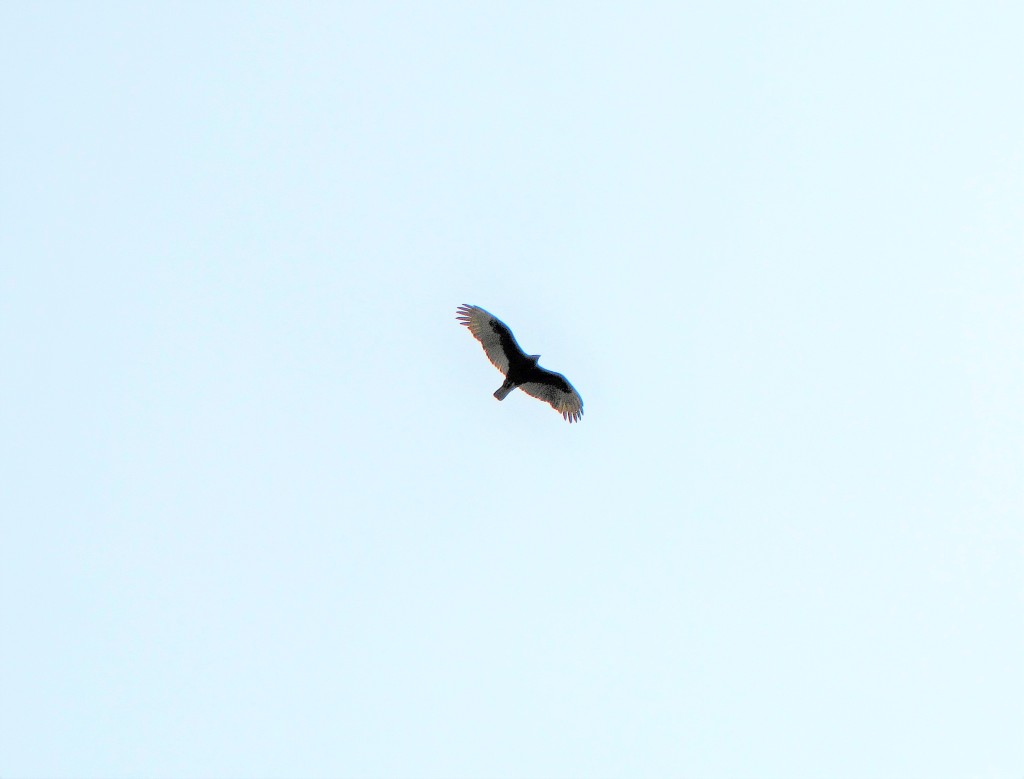 … the elegant two-tone wings, grey feathers with black linings, revealing this to be a turkey vulture. These birds, very common locally, are almost exclusively carrion eaters, and probably unrelated to hawks or eagles.

Now we are in the hamlet of Jerseyville, a temperance settlement for most of its history. If you plan to head back the way you came along the Trail, you can do a triangular loop: off the Trail south down Field Road, and then west along Jerseyville Road. There is a sidewalk on the north side of the road, and you’ll pass a small gallery specializing in quality handmade objects at the crossroads marking the centre of the village. At the Rail Trail crossing you’ll turn sharp right. Jerseyville was not named directly for the Anglo-French Island in the English Channel, but for the state of New Jersey, USA, from where Loyalists fleeing the American Revolution came and began to settle here in the 1770s. There was once a train station here, but the Trail is all that’s left of the line, and the station building has been moved to Westfield Heritage Village in Rockton. The Wesleyan Methodist chapel (1860), a United Church since 1925, still stands on Field Road. The brick building is in the Romanesque Revival style.

Next to the church is one of Jerseyville’s main employers, the HQ of a small circus, offering performances by acrobats, clowns, fire dancers and aerialists, e.g., at Hamilton’s annual Supercrawl. 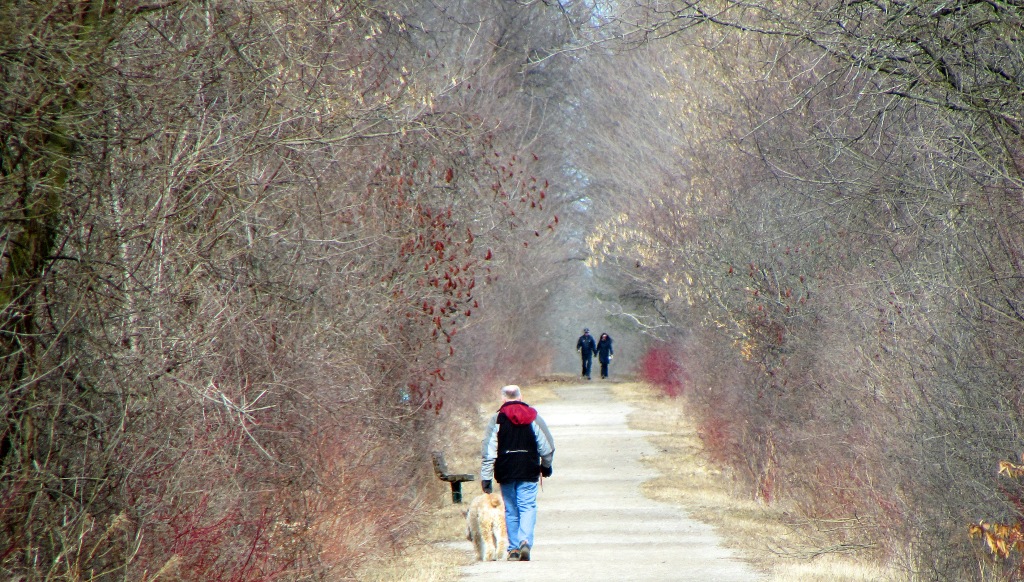 As I returned on the Rail Trail running north of the hamlet, I encountered some locals and their dogs getting exercise. These were the only other Trail users I met on this hike.